Amazon says it only supports information from "official sources."
Share

Update July 14: A day after the publishing of this article and being asked about the book’s removal, an Amazon representative has confirmed that the Kindle version of the ebook will now return for sale. Amazon didn’t give us a reason for the reversal.

Amazon has banned and deleted the listing of a new book about the politics of the coronavirus outbreak, particularly as it pertains to Canada. The book, called China Virus: How Justin Trudeau’s Pro-Communist Ideology is Putting Canadians in Danger by journalist Ezra Levant and became available on Amazon.ca on July 10.

Levant is not new to publishing books. His last book became the number 1 selling book on the whole of Amazon Canada back at the start of the year with a book called “The Libranos: What the media won’t tell you about Justin Trudeau’s corruption.”

It’s clear that levant writes fiery books meant to provoke, get attention, and push boundaries. But why should his latest book be banned?

“Due to the rapidly changing nature of information around the COVID-19 virus, we are referring customers to official sources for health information about the virus. As a result, we are not offering your book for sale,” part of the email read.

However, as Levant notes in an entry on the book’s official website, the book does not provide medical advice. He argues that his book is “purely a discussion of Canada-China politics.”

But it’s not the first time the book was banned. In fact, it had a hard time getting published in the first place. In an effort to get the book accepted, Levant’s lawyer, David Elmaleh, wrote a letter to Amazon.

In the letter, the lawyer argues that China Virus is “not a health-related book.”

“It does not touch on medical-related theory. It does not question, analyze, or consider the medical origin of the virus, nor health information about its spread. Rather, it is a political science book about the prime minister,” Elmaleh wrote in the letter. 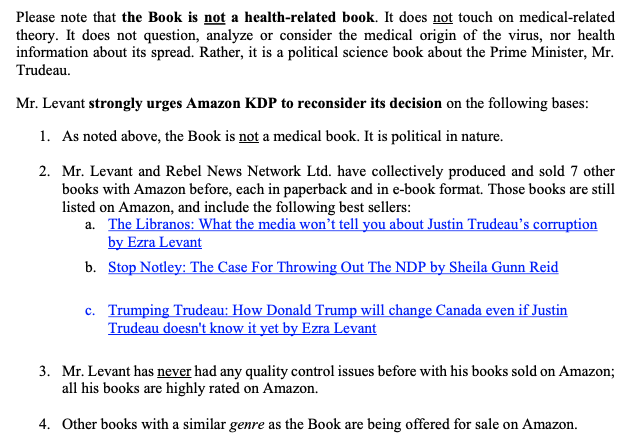 Elmaleh even suggested changing the category of the book from “Non-fiction – Medical – Health Policy” to “Non-fiction – Political Science – Commentary & Opinion.”

The letter did not change Amazon’s mind as the book remained banned. But a few days ago, the book became available on Amazon.ca without any explanation from the online store.

In the few days that the book was available, it became a bestseller. It reached #1 on Canada’s Kindle and the paperback version had reached #2.

It was then that Amazon backtracked and removed the book’s listing.

After the banning of the book, Levant is instead selling the digital version of the book on his own website in exchange for a pay-what-you-want donation.