Cartoonist Ben Garrison sues the ADL for defamation, seeks over $10M in damages

Garrison argues the ADL acted with "malice" and falsely branded him as anti-Semitic - a claim that was then regurgitated by media outlets.
Share

The Anti-Defamation League (ADL) is known for scouring the internet for what it deems to be hate speech or misinformation and then using what it finds as the basis of a campaign.

Sometimes these campaigns will focus on attempting to get a company to censor more hate speech or misinformation, such as the current “Stop Hate for Profit” campaign which is being spearheaded by the ADL.

Other times these articles will accuse public figures of being racist or anti-Semitic. These accusations are often then repeated by media outlets and have the potential to damage the reputation and career of these public figures before they have the opportunity to respond and defend themselves.

In the case of cartoonist Ben Garrison, he was publicly disinvited from The White House’s Social Media Summit last year after an ADL article about him became the subject of heavy media attention.

Now Garrison is suing the ADL for “defamation, conversion and trespass” and seeking $10.35 million in damages.

The bulk of Garrison’s complaint focuses on an August 2017 article published on the ADL’s website which is titled: “Anti-Semitism Used in Attack Against National Security Adviser H. R. McMaster.” 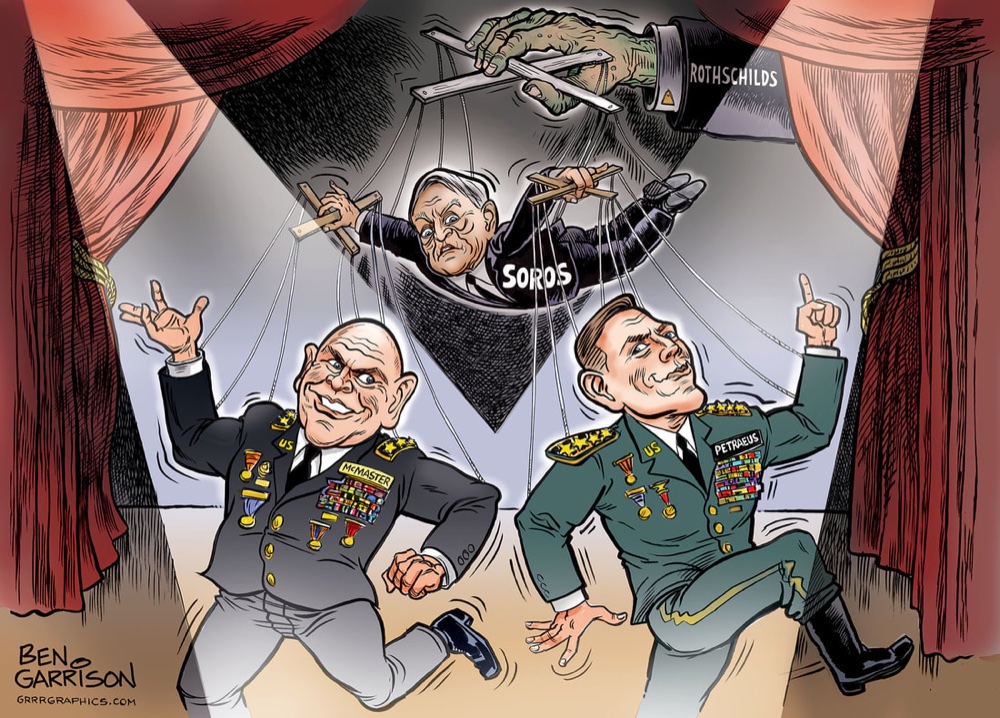 Garrison’s complaint accuses the ADL of smearing him and making “numerous intentionally false statements” in this 2017 article which include claims that Garrison “displayed a clearly anti-Semitic cartoon on his own website” and claims that “the anti-Semitic theme of the Garrison cartoon is impossible to miss.”

The complaint states: “Garrison was held up to world condemnation, scorn and public humiliation leading up to the Social Media Summit at the White House, and thereafter. He has been forced to endure vicious attacks by Internet trolls as a result of the ADL’s publications.”

Additionally, the complaint alleges that “the ADL is engaged in a targeted campaign of defamation to destroy Garrison’s reputation and livelihood” and describes tweets about the article from the ADL’s Vice President Oren Segal and Senior Research Fellow at the ADL’s Center on Extremism Mark Pitcavage as examples of how “ADL operatives throughout the country have excessively published the false and defamatory statement that Garrison is anti-Semitic.” 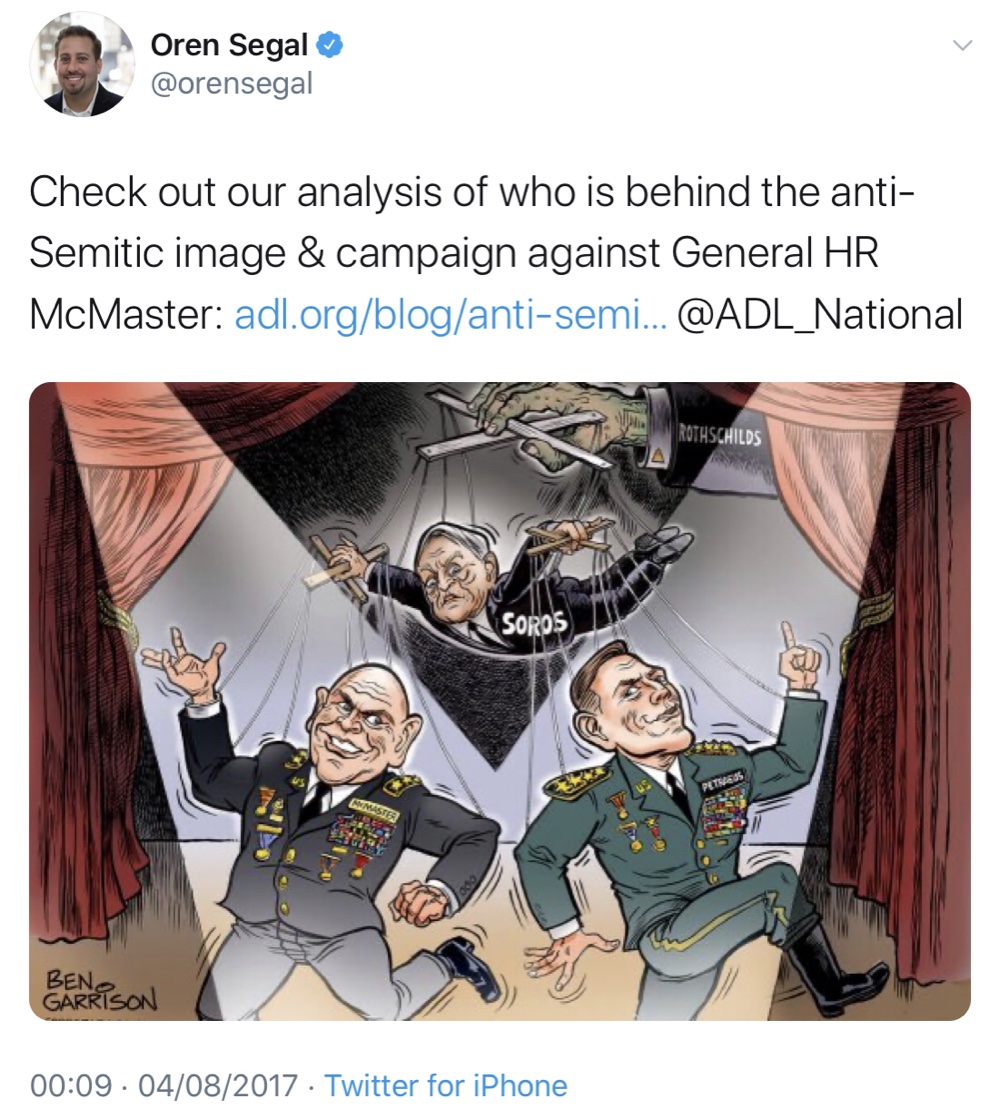 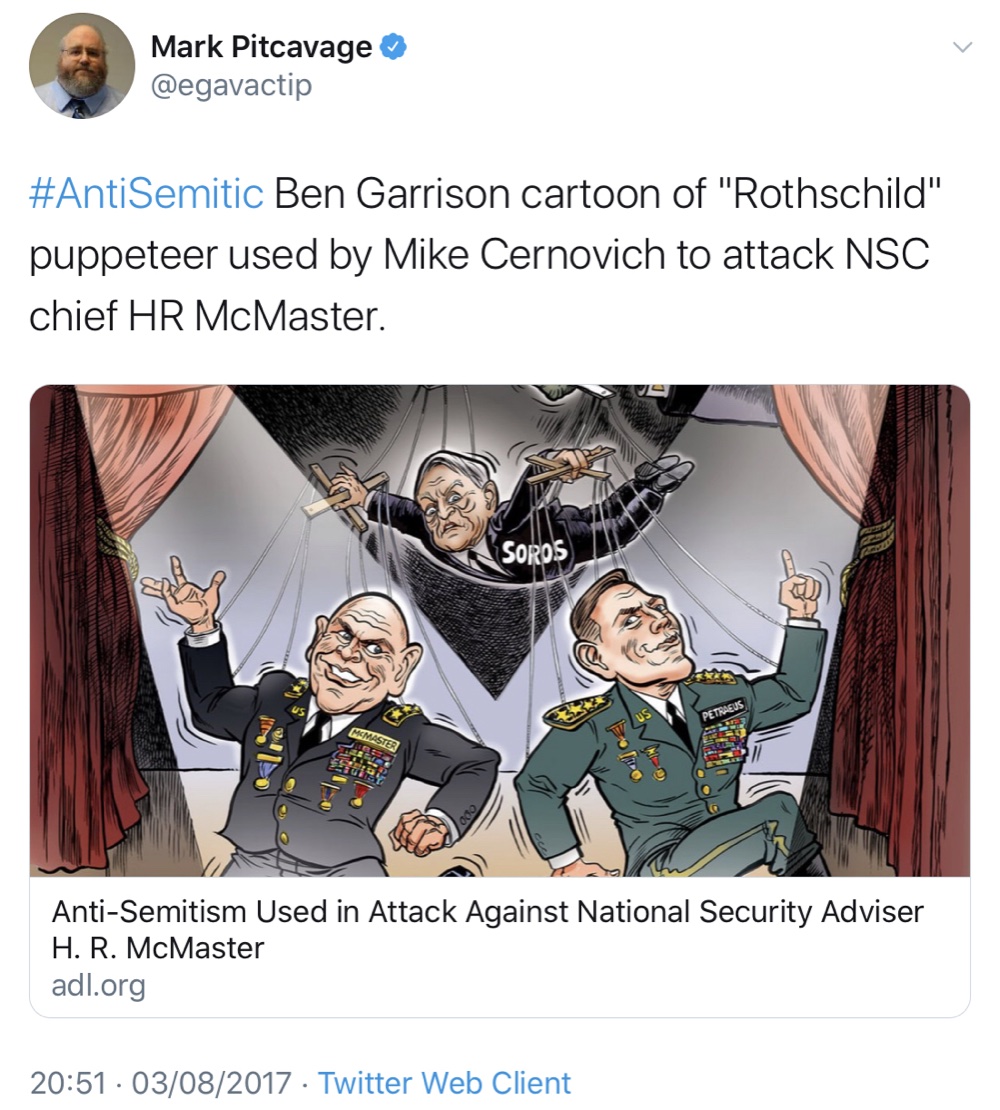 In the 2015 article, the ADL’s Pitcavage noted that people were “trying to frame” Garrison by circulating rumors about him and that “a few years ago someone altered his [Garrison’s] drawing the ‘March of Tyranny’ to include an anti-Semitic drawing of a Jewish person, and the image — as well as other manipulations of his work — circled widely on the internet.”

The complaint argues that “the ulterior purpose of the ADL Article was to silence Plaintiff’s free speech and his criticism of the Rothschilds and Soros.”

While this 2017 article is the main focus of the complaint, the complaint also cites the ADL’s publication of a doctored version of one of Garrison’s cartoons as evidence of the “ADL’s actual malice towards Garrison.”

The complaint states that the “ADL trolled Garrison, doctored one of Garrison’s cartoons and published it on ADL’s website (without Garrison’s permission) to make it appear to ADL’s donors, members and the public that Garrison was, in fact, anti-Semitic and racist.”

“The doctored image remained prominently displayed on ADL’s website for a long time,” the complaint adds. “On July 11, 2019, after Garrison lost the opportunity to attend the Social Media Summit, ADL finally admitted that they had doctored the cartoon. The doctored cartoon, with its hateful content attributed to ‘Ben Garrison’, remains on ADL’s website however.”

Additionally, the complaint cites several other ADL articles as evidence that the “ADL has published on its website numerous other false and defamatory statements about Garrison.”

“In truth, ADL is a tool of the Democratic Party and private corporations, such as Google, to target supporters of President Donald Trump, members of the Republican Party, and conservatives generally,” the complaint argues.