The popular conservative news site is now a “deprecated source” on Wikipedia which means citing it is generally prohibited.
Share 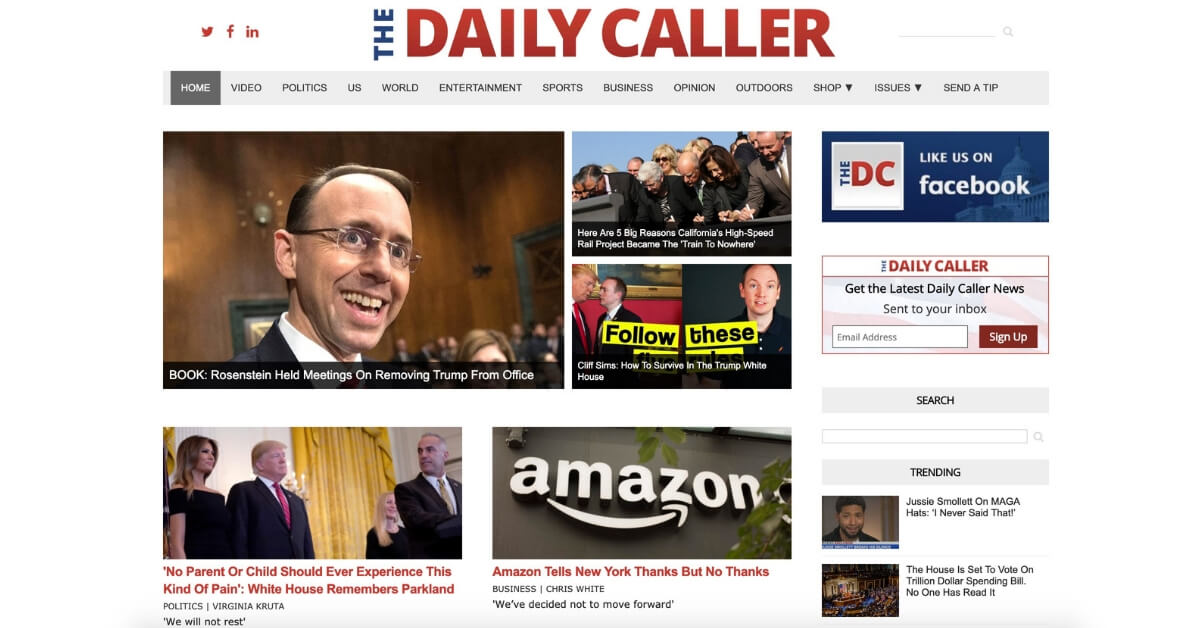 The editors of Wikipedia, the free encyclopedia, have yet again demonstrated their left-wing bias by banning citations of conservative news site The Daily Caller as a reliable source.

The Daily Caller receives over 28 million visitors per month according to SimilarWeb and is one of the leading sites in the online conservative media space.

Many people see Wikipedia as a community project where anyone can edit or update pages, and no one has the power to block specific citations. However, Wikipedia’s editors can actually use their privileges to change how certain pieces of information are shared on the site. One of these privileges includes being able to decide which sources are deemed reliable and unreliable.

Wikipedia’s editors started to exercise these privileges in 2017 when they made the decision to deprecate the Daily Mail and treat it as an unreliable source. Since then they have deprecated eight sites, with The Daily Caller being the most recent deprecation.

Deprecated sources are highly questionable sources that editors are discouraged from citing in articles, because they fail the reliable sources guideline in nearly all circumstances. These sources are subject to restrictions, including an edit filter.

And here’s how Wikipedia describes the consequences of being deprecated:

Deprecated sources are restricted in four ways, all of which originate from the 2017 Daily Mail RfC [Request for Change]:

1. The source is designated as a generally unreliable source.

2. Citing the source as a reference is generally prohibited, especially when other more reliable sources exist. Images and quotations should also be avoided, since they can be manipulated or fabricated. If the source contains material that cannot be found in more reliable sources, it may be valid to assume that the material in question is incorrect. The source may only be used when there is a demonstrable need to use it instead of other sources.

3. The source is no longer used to determine notability.

4. Typically, an edit filter set to “warn” is implemented, which displays a message to editors attempting to cite the source in an article, notifying them of the existing consensus and asking them if they want to proceed. At this point, the editor may choose to cancel the edit, or dismiss the warning and complete the edit. An alternative to this is that the website for the source may be put on the spam blacklist and/or the Wikimedia global spam blacklist, though this option is generally not a direct result of deprecation.

Wikipedia’s editors claim that The Daily Caller was deprecated because it “publishes false or fabricated information.” However, it actually appears to be part of a much wider pattern of this small group of Wikipedia editors censoring prominent right-leaning sites.

To date, Wikipedia has deprecated a total of eight sources which are listed below:

As pointed out by the Twitter user @tdadler, only one left-leaning source has been deprecated by Wikipedia. That site, Occupy Democrats, is a low-traffic site which hasn’t posted since July 2018 and posted just twice in 2018.

87.5% of the sources that have been deprecated are right-leaning and these are all large, active, high-traffic sites with a total monthly audience of over 511 million visitors according to SimilarWeb.

We often see social media sites as the main gatekeepers when it comes to online free speech but this small group of Wikipedia editors are increasingly using their powers on the site to censor prominent right-leaning websites.

Billions of people use Wikipedia as a source of reference and its the fifth most visited site on the internet. Wikipedia results are also often given the top result in Google search and in the auto-suggest results of browsers such as Apple’s Safari. Deprecated sites lose access to this huge level of exposure.

Being deprecated in Wikipedia also has a negative impact on a site’s search results. Google often pushes sites with Wikipedia links higher up in search, so sites that are deprecated often get buried further down in the results.

Currently, deprecation happens through public discussions among Wikipedia editors, so there is still an element of democratization in the process. However, Wikipedia editors often change the rules and apply special protections to certain decisions in order to push them through, so the democratic elements of this process are quickly slipping away.

Mark Dice did a great explanation of how this happens in his video about the Wikipedia editors who are currently attempting to prevent people from updating and correcting his page, so check that out if you want some more insights on how the whole process works.

Since the Wikipedia editors are consistently locking down the decision making processes on the site and scaling up the deprecation process, it looks like this censorship is only going to get worse.

Social media is often seen as the battleground for online free speech but ensuring that we maintain the right to share information freely on Wikipedia is just as important.