Game modding is at threat everywhere the giant industry driving game publishing can reach to stifle the very idea of ownership over software products you’ve paid for.

Both outcomes are, legally and intellectually, about equally as engaging and interesting.

Unless, that is, you are old enough or aware enough of the scene for long enough to remember how computer gaming started out in the first place. In that case – the moral/ethical aspect of all this might leave you somewhat unsettled.

But let’s keep it in 2020. These days, Take-Two seems to have it so good that it might as well keep its future business tied up neatly by going after a non-commercial game modder – whose work should not even feature as a sidenote in its business considerations.

Take-Two is the parent company behind Rockstar Games, who managed to produce such classic series as Grand Theft Auto and Red Dead Redemption (RRD).

But Johnathan Wyckoff, aka DamnedDev, who was behind the Red Dead Redemption: Damned Enhancement Project faces a lawsuit filed by the company in New York last December.

Wyckoff’s idea was reportedly to modify console (PlayStation 3 and Xbox 360) versions of the game to make sure they are available on PC. That was at the time a void that Take-Two fans and consumers felt was left unfulfilled.

But instead of having a chance to write more features and better graphics within what he believed were the legal bounds set forth by Take-Two itself… a lawsuit filed by a game corporation was in Wyckoff’s future.

Take-Two’s lawsuit seems to be mostly about making sure that Wyckoff’s work doesn’t water down the company’s possible future monetizing opportunities.

Meanwhile, Wyckoff, a gamer and modder, is defending himself by saying that his actions regarding the game fall within the developer/publisher’s own rules on “PC Single-Player Mods.”

“Take-Two has agreed that it generally will not take legal action against third-party projects involving Rockstar’s PC games that are single-player, non-commercial, and respect the intellectual property (IP) rights of third parties,” Wyckoff stated in his filing, referencing this page in Rockstar’s terms. (archived) 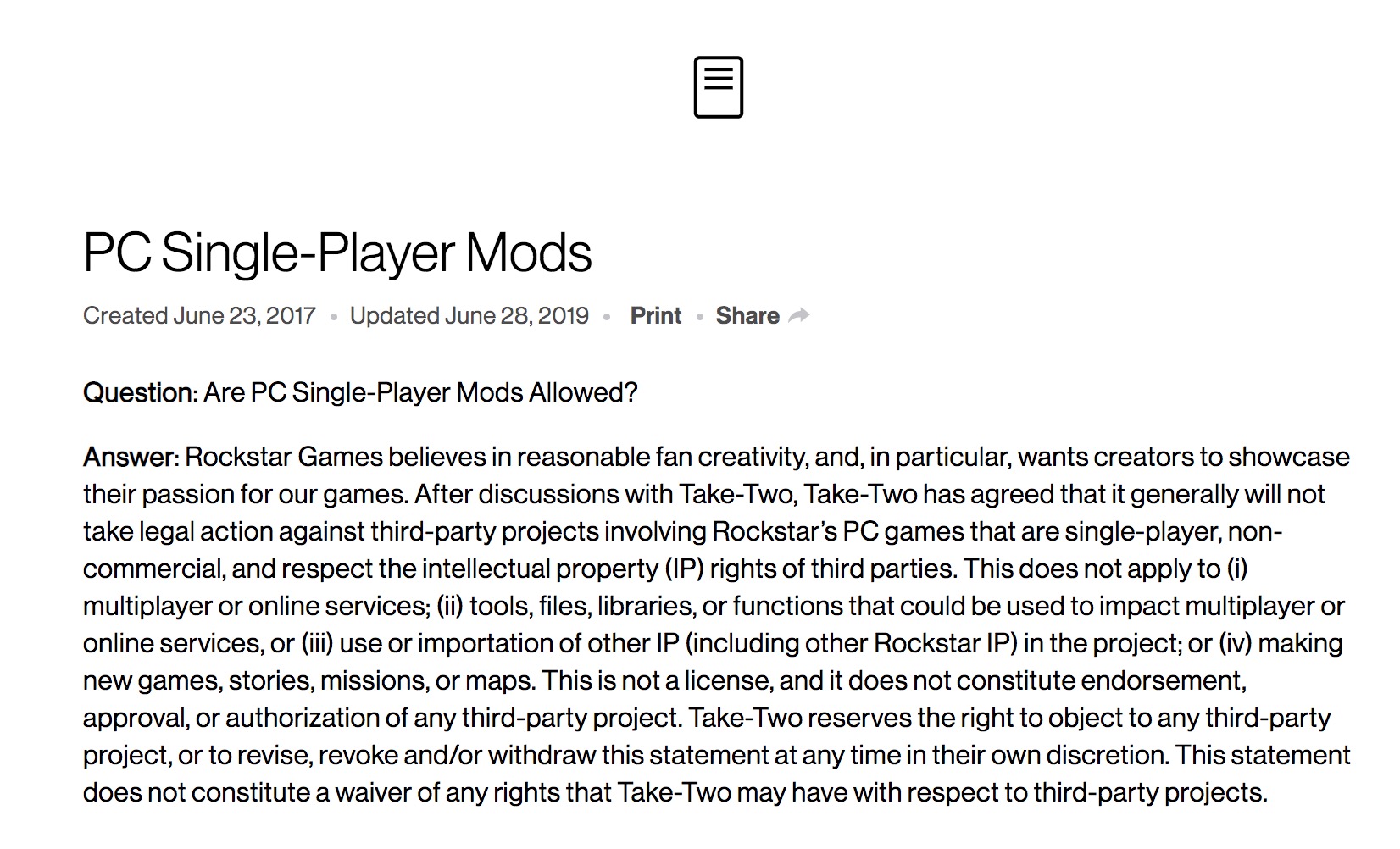 The takeaway here is that Wyckoff’s project is dead – “the defendant no longer has access to the mod project files and does not intend to redevelop them.”

Even though he maintains that he acted within Take-Two’s mod policy, the gamer’s priority now is understandably simply to avoid being held legally liable for any copyright infringement and paying legal costs.