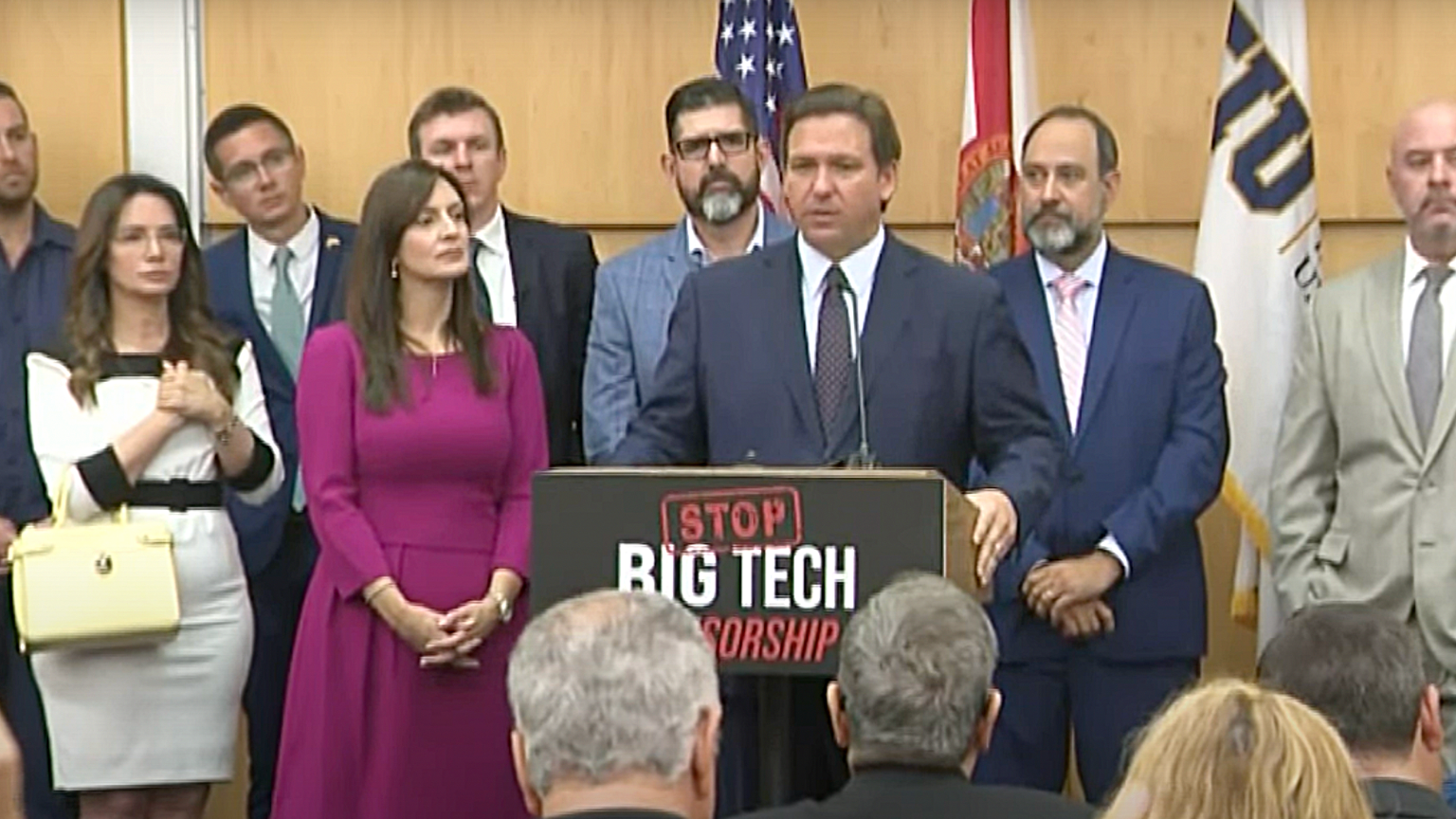 On Monday, Gov. Ron DeSantis (R-FL) signed bill SB 7072, which will give Floridians the power to sue Big Tech platforms for unfair censorship.

In a speech at an event at Florida International University, DeSantis explained how the new bill would help push back against Big Tech’s massive power.

“Really Florida is a trailblazer, yet again, on another issue that’s really important to not just millions of Floridians but really tens of millions of Americans,” DeSantis said.

“When the Founding Fathers established our country and crafted the Constitution, they were very concerned with threats to liberty,” he continued, explaining how they feared concentration of governmental power would “lead to people’s liberties being curtailed.”

“We are now, though, in a situation where we have things that, I think, were probably unforeseen by the Founding Fathers,” the governor explained. He highlighted that the founding fathers created the First Amendment to protect against the overreaching by the government, but “we now have a situation in which some of these massive, massive companies in Silicon Valley are exerting a power over our population that really has no precedent in American history.”

“I would suggest the monopolies today, these Big Tech monopolies, are exerting way more influence over our society than the monopolies in the early 20th century, which led to anti-trust and a lot of trust-busting,” DeSantis said. He described social media platforms as “public squares,” that have chosen to be “enforcers of orthodoxy,” by suppressing ideas “that are either inconvenient to the narrative,” or those that they “personally disagree with.”

The governor used the coronavirus origins and lockdowns to demonstrate Big Tech platforms’ power and impact of their decisions.

“Now we have information that this very well may have emanated from the Wuhan lab, that it was a leak from the lab. But you remember when people last year were raising that as something that needed to be investigated, they were deplatformed for talking about the lab leak,” DeSantis said.

“They were censored for having said that. And now, even Fauci admits that this may be something that very well is the case. Are they now going to censor Fauci and pull him down off social media?” he asked.

He explained that the continued censorship, cancelling, and shadowbanning of alternative viewpoints “creates partisan echo chambers.”

“And honestly, they are some of the major reasons why this country is divided for doing what they’re doing,” he added. “And the worst part about this: Silicon Valley thinks they know better than you.”

Under the new bill, Floridians “will have the right to sue companies that violate this law – and win monetary damages,” for being “treated unfairly,” the governor’s office said. The law will discourage online platforms “from ‘moving the goalposts’ to silence viewpoints they don’t like.”

“If social media platforms are found to have violated antitrust law, they will be restricted from contracting with any public entity. That ‘antitrust violator’ blacklist imposes real consequences for Big Tech oligopolies’ bottom line,” his office said.

“Any Floridian can block any candidate they don’t want to hear from, and that is a right that belongs to each citizen — it’s not for Big Tech companies to decide,” his office said.