GitHub to ditch coding terms “master” and “slave” amid protests

GitHub follows other tech companies in the move.
Share

GitHub, like most US companies, has announced changes in response to the recent protests and will now work to modify terminologies that may have racial references, such as “master/slave” or “Whitelist/Blacklist”. In this way, they join other companies that are also changing terminologies in their repositories and programs.

Since around 2014, vocal activists have called for large technology companies to modify the terminology they use in their programs for one with fewer racial connotations. Drupal, a content management service similar to WordPress, started this task by changing terms like “master” or “slave” to “primary” or “replica”.

The term “master” is used in the same sense as “master copy” – the original of something – and “slaves” are references to copies. Even though this idea had the support of large companies such as Microsoft, at the time it was not relevant enough to influence all the jargon currently used in the programming world.

However, due to the recent protests and resurgence of the Black Lives Matter movement in the United States, companies have wanted to show their support by changing some policies.

Among them is the substitution of names used in programming that, in one way or another, could be interpreted as racist.

Recently, Google Chrome announced its proposed changes in the browser’s default source code to replace terms with neutral synonyms and GitHub announced it was following suit. 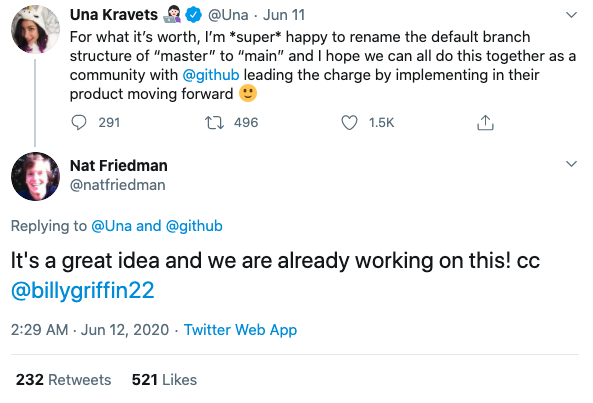 After CEO Nat Friedman’s confirmation, it became known that GitHub would also replace terms in their repositories. “master”, frequently used to indicate that a code is the original, will be replaced by “primary/main”, while the derived repositories that until now were called “slaves” will become “secondary”.

Other terms that will change will be “blacklist” and “whitelist”. These changes will soon be implemented, although many people believe that this could cause confusion among the community that has been using these terms for many years. Also, others have defended the origins of these computer terms saying they do not have racist connotations, but rather to historical ways of administration.

GitHub is the latest to join this movement. Other projects have expressed their intention to follow these changes soon, such as OpenZFS, Microsoft’s PowerShell Scripting language, Javascript, and even Google with its Android OS.