On October 6th, court records of an arson case were unsealed showing even more of the extent to which Google cooperates with law enforcement.

In July, police asked Google for a list of everyone who searched for a particular Florida address within a certain time frame before the arson.

One IP address from that list was from Atlanta. They then asked Google for all of the searches that originated from that IP address, which included “where can i buy a .50 custom machine gun”, “witness intimidation”, and “countries that don&rsquor;t have extradition with the United States”. 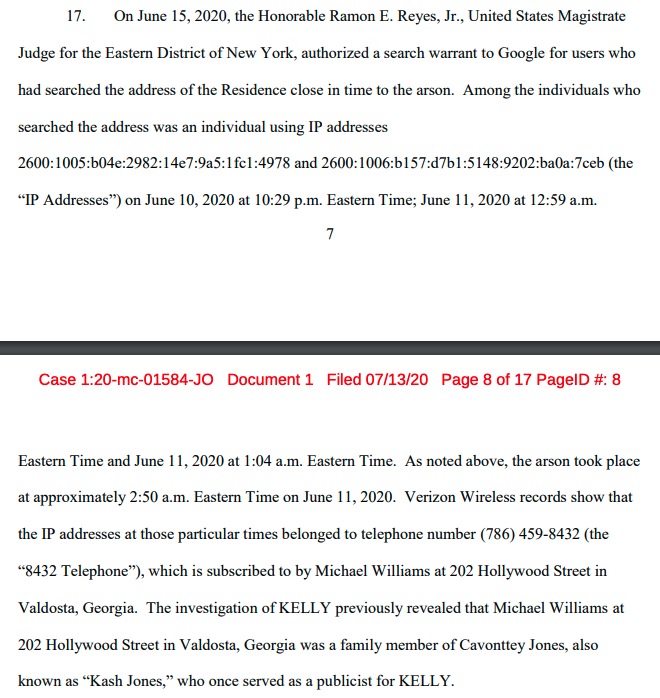 After deciding that they had their guy, they used the IP address to discover the phone number tied to it – which ended up belonging to Michael Williams. They then discovered that that phone number had been in Florida around the time of the arson. This was discovered by tracking the location history of that phone number through data from cell towers including ones near the arson site.

Michael Williams is reportedly a relative of R. Kelly&rsquor;s publicist. R. Kelly is a notable R&B and Pop singer that was recently canceled over several accusations of sexual misconduct, even involving minors.

The arson in question was of an SUV reportedly belonging to a witness in the federal racketeering case against R. Kelly. So in addition to arson charges, Williams was also charged with witness tampering. The SUV was parked outside the witness&rsquor;s home.

The argument used to justify Google&rsquor;s cooperation with law enforcement is that this is a violent crime and a high profile case, but that doesn&rsquor;t change the fact that an unknown number of IP addresses were also handed over by Google. Those IP addresses were all investigated as if they were suspects in this crime, until enough information was discovered to either rule them out or – in Williams&rsquor; case – focus the investigation on them.

These “keyword warrants” are no different from geofence warrants, where law enforcement asks Google for everyone who&rsquor;s been in a certain location at a given time. While understandably a useful investigative technique, it&rsquor;s alleged to be a violation of the Fifth Amendment rights of everyone who simply happened to be in the wrong place at the wrong time.

Or in the case of keyword warrants, anyone who searched for a particular phrase for whatever reason. This could even include real estate interest – wanting to check out a particular neighborhood before purchasing property there.

There&rsquor;s also no information available on what law enforcement does with the “noise” – the information they gather while investigating all the dead end IP addresses on that list before finding their target. For all we know, even after all those innocent people are ruled out, their data remains in the hands of law enforcement.

This trend of using “reverse search warrants” isn&rsquor;t going away either. In fact, it&rsquor;s only getting worse. According to CNET, Google received 15 times more geofence warrant requests in 2018 than in 2017. And 5 times more in 2019 than in 2018.

The only reason we&rsquor;re even learning about these reverse search warrants now is because of how common they&rsquor;re becoming.

Williams&rsquor; attorney, Todd Spodek, intends to challenge the keyword warrant that was used to charge his client, arguing it violates his constitutional rights.

“Think of the ramifications in the future if everyone who searched something in the privacy of their own home was subject to interviews by federal agents,” Spodek said. “Someone could be interested in how people die a certain way or how drug deals are done, and it could be misconstrued or used improperly.

“If Google stored data in a way that was truly de-identified, then they also couldn&rsquor;t give it to the government,” the Electronic Frontier Foundation&rsquor;s surveillance litigation director Jennifer Lynch said. “Google&rsquor;s not setting up their system or changing their practices in a way that could prevent these kinds of searches.”

Better yet, several alternative search engines exist that offer results just as good as Google&rsquor;s, such as StartPage.