Here a brand new community is forming that is focused on freedom of expression and quality of content.
Share 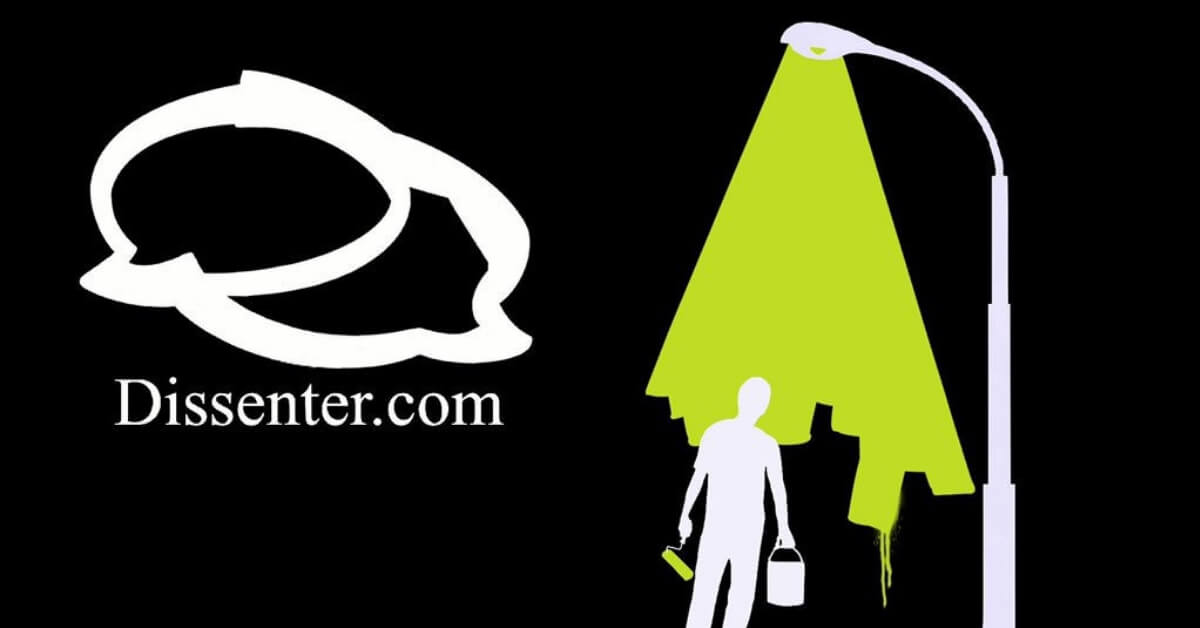 Have you noticed the internet feeling smaller over the years? It might be more than just nostalgia, the internet used to be more free.

There is a growing amount of censorship on the internet every day. Comment sections were ripped out of the newspapers’ websites. Conservatives are banned from platforms, their content is throttled, and open discussions on political topics are being hidden from view behind restricted comment sectioned on the platforms that do allow user input.

This movement towards a less free environment is being heralded by the left as they chase away social media platforms such as Gab and Minds. Those platforms, which don’t have much more offensive content than the platform Twitter, are branded as hate sites by the leftist media. They claim that only people from the Alt-right use such websites. Meanwhile, most progressive journalists are verified on Twitter.

On February 24th, 2019, Gab released Dissenter, a browser extension. It functions as an independent comment section available on every webpage that is registered with Dissenter. All one needs to do to install it is to sign up for a gab.ai account and download the extension.

The service works in two ways. While on dissenter.com URLs can be entered into the search to bring up comment sections, and while browsing, the extension can be opened with a click to reveal the comment section for the page the user is on. For users to build a comment section, if there isn’t one already, they simply enter a URL on Dissenter and leave a comment on it.

Vice News was furious about this release. They were quick to release an article misaligning the service and to cry about the functionality that it offers. The Washington Post joined in to try to harm the Dissenter brand. Several other liberal voices went on to draw the conclusion that it could be used to troll people.

Luckily, Dissenter survived the complaints and goes on to offer a truly revolutionary service. Outside of the extension, the website itself is a threat to the mainstream media as it has become a more convenient way to collect content.

Instead of having to go to different papers and channels for your news, Dissenter’s front page brings the content to you as people interact with it. There’s a section for the top, controversial, and latest content. It works as a sort of global forum board that can reach any piece of content on the internet.

Gab has made a point that they will never censor content, so Dissenter exists as a true reflection of the voice of the public. This greatly benefits users because it allows them to have conversations in places that don’t allow them to speak. 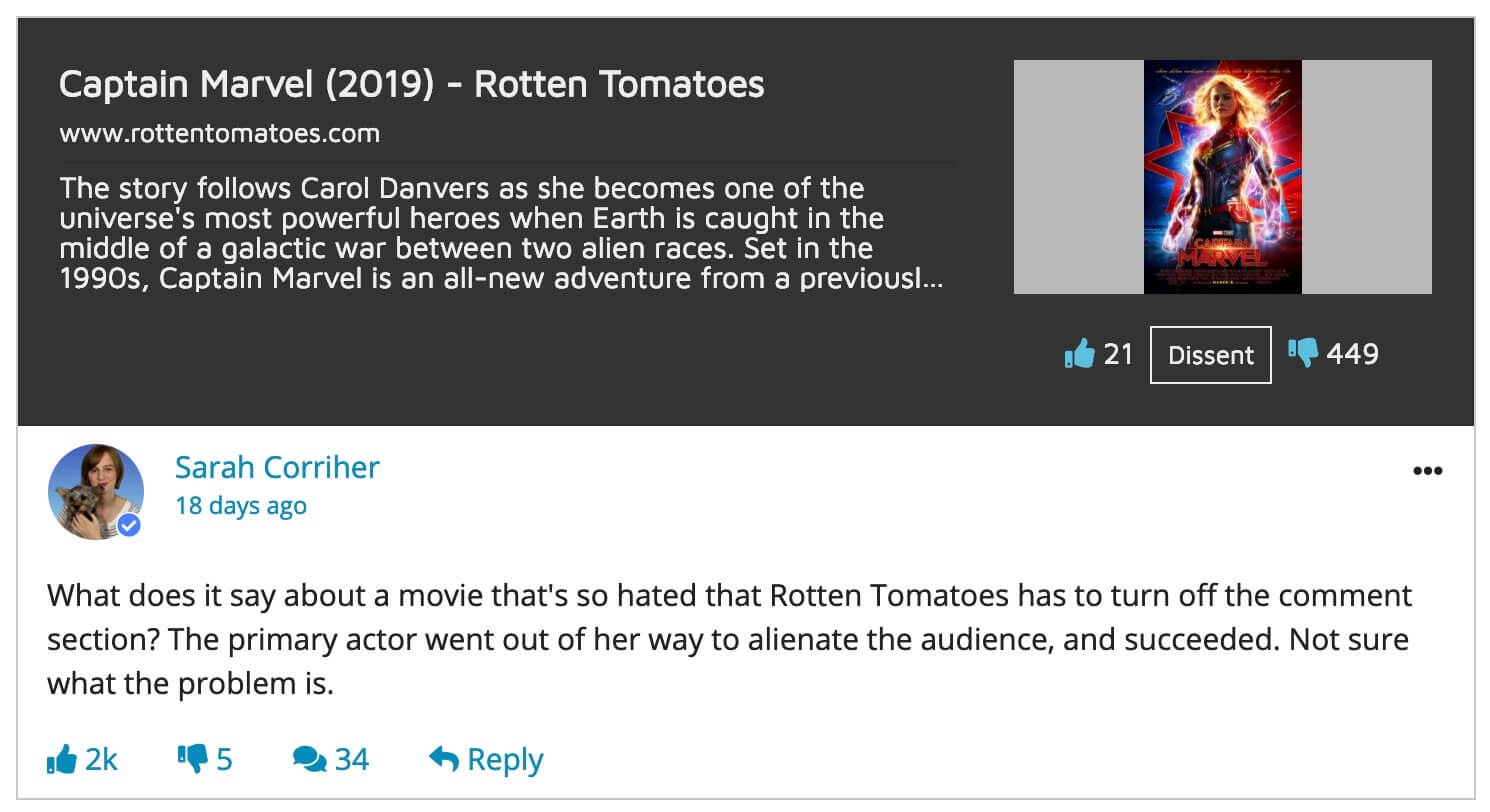 One of the recent developments to happen on the internet was that Rotten Tomatoes removed a function which allowed you to comment your thoughts on a film before it was released. Again the journalists raised a cry, blaming fringe reactionary voices for targeting the film Captain Marvel, which features an appearance from the diseased Stan Lee. After getting the functionality removed from the website the movie still came out. Users were allowed to rate it after it opened in theaters. The review score was also awful.

Now when such a fiasco occurs that progressive pressure websites to remove functionality from their service, such as a review sections, users simply need to use Dissenter to either start or access a comment section which lets them discuss their thoughts. This can be used across the internet to stop the censorship of speech.

Again, many news sites don’t even offer comment sections nowadays. They’re not interested in the reactions of their readership; they’d rather preach down to them and not have to respond to criticism. Now all criticism and reactions can be proudly displayed without censorship, as Gab sides with the user.

Dissenter also allows users to vote on content and comments, so it allows an honest user reaction to whatever has been posted. This directly addresses the biggest issue with news, which is its accountability. By voting down posts on Dissenter users can signal which content isn’t trustworthy, and through the comments, they can explain why. The conversation is no longer going one way. 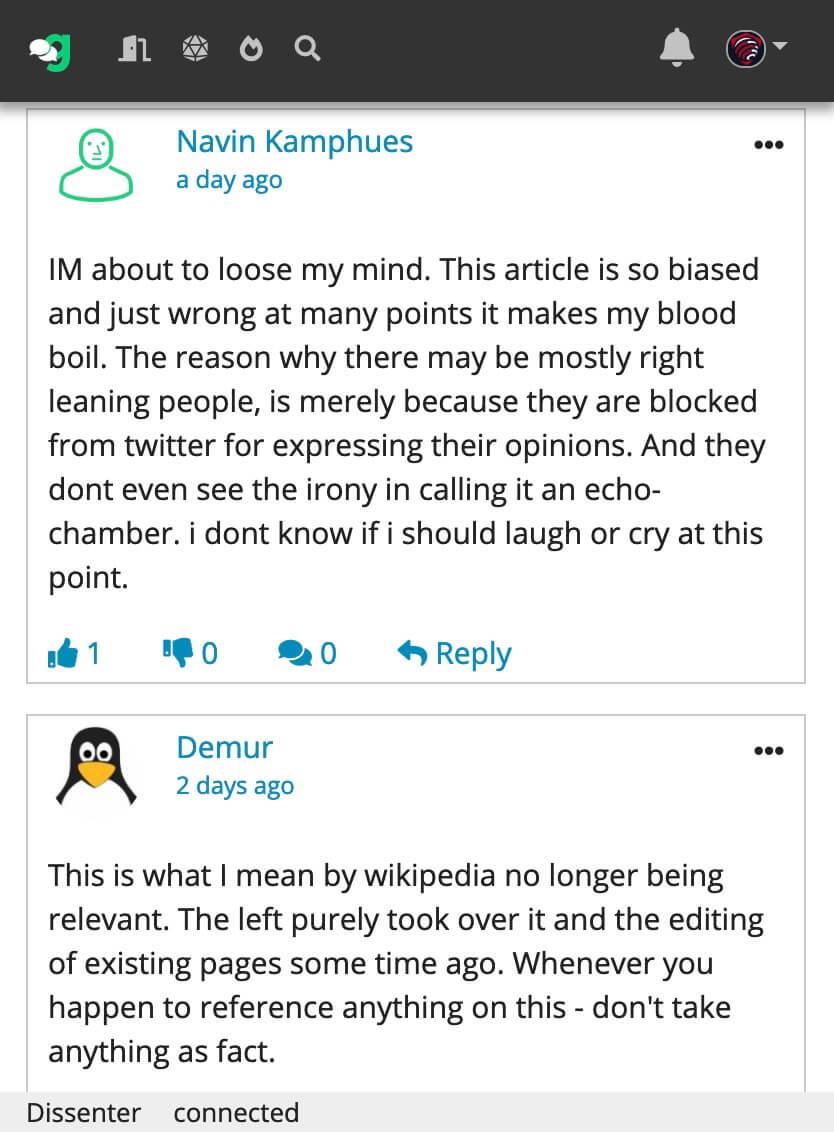 Wikipedia too will benefit from such a service, as there is an inherent bias that runs on the site. Several admins babysit certain articles, even going so far to lock articles from contributions while Wikipedia was conceptualized as a user-generated encyclopedia. Dissenting on articles which have locked out user engagement will allow the conversation to thrive organically once again.

Dissenting will also protect users from being punished for using certain phrases or talking about ideas freely. While accounts have been banned from Twitter for using the phrase “lean to code” and tweeting the letter “n”, Dissenter allows its users to speak freely without threatening their access to their platform. By using it in conjunction with other social media it will allow people to have a sense of humor online without losing their accounts. 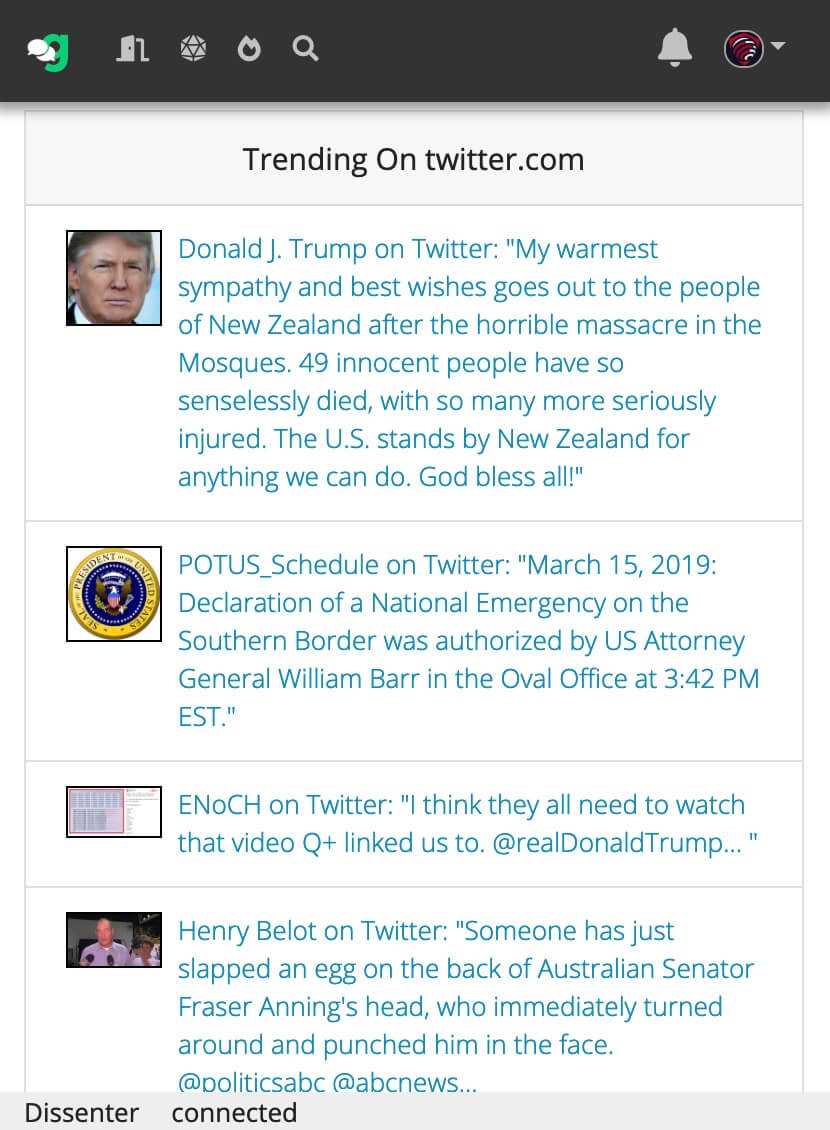 The conversation around Twitter hashtags can also be broadened, as instead of being limited to talking on the platform which limits the number of characters you can use and bans its own users, Dissenter allows you to access comments on any hashtag that people are talking about. This is instrumental in clearing up the validity of certain things that are trending, as context can be provided by people who are using the term without being filtered through Twitter’s opinions on appropriate speech. 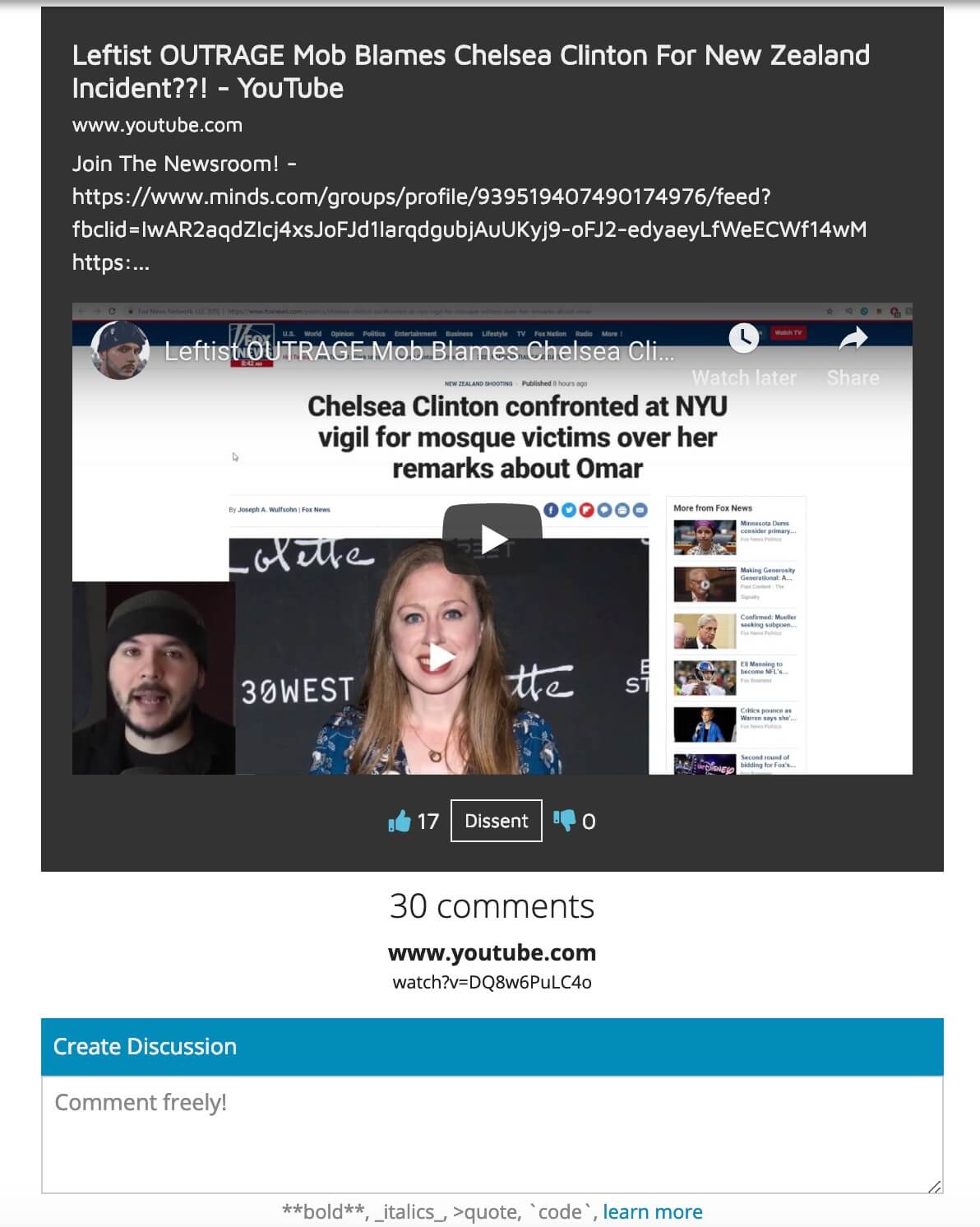 For videos that block comments, Dissenter makes an easily accessible conversation possible at all. Without that function, there would only be corners on the internet to discuss certain videos, but with Dissenter, it’s just a click away. It radically changes the landscape of the internet by forcing freedom as a reality. There’s no way to be policed on the platform because it’s a private platform that exists to prevent such a thing.

This extension also offers a possible solution for the concern that YouTubers are responsible for the content posted on their comment section. It allows people who post offensive or edgy jokes to do so without endangering the reputation of their favorite online personalities. A potential problem with this system would be that it would allow for people to work around certain debatably appropriate bans.

On videos of children, pedophile rings have been leaving timestamps for each other to curate the content. YouTube has since been purging all comments related to this. Hopefully, Dissenter will recognize that freedom of speech might have a limit when it comes to facilitating pedophiles browse through videos if they decide to migrate to the extension. Bans are a terrible thing, but illegal activity should not be facilitated. Still, Gab has a good track record in terms of their principals, so they deserve to be trusted that they would be able to handle such a situation if it were to arise.

Dissenter has the potential to cause a major shift in the tech world. So far the internet has been separate through the platforms and the pages offered by creators on those platforms, but through this extension, a conversation can be had about everything. It is truly connecting the internet, as the internet connected everything else.

This can completely shift the legitimacy of the conversation. Through ratings, untrustworthy articles and sources can be downvoted and illustrated to be unreliable.

From the front page of websites to specific pages on them, Dissenter offers a place for conversation which allows a great amount of nuance. If there is a single inaccurate story on a website it most likely won’t crash the rating of the site overnight. The Dissent on that article will probably show a negative response to the faulty story, but the website will be able to retain its reputation if it changes its ways.

In addition to providing the ability to have a voice where people want to raise criticism and spread awareness of negative content, Dissenter also has functioned as a fantastic tool for browsing your favorite sites.

Opening up the extension to the Top tab on websites will show what conversations are being had by other users on the site, and what the most exciting content is. It has revolutionized the world of Social Media because it has democratized it. There will be no censorship with Dissenter.

Try it if you are at all interested in online discussion. Here a brand new community is forming that is focused on freedom of expression and quality of content. If you want to hear what others think, and work with others to see what news is legitimate, this platform is the answer to your prayer.