Rogan was skeptical whether healthy 21-year-olds should be vaccinated.
Share 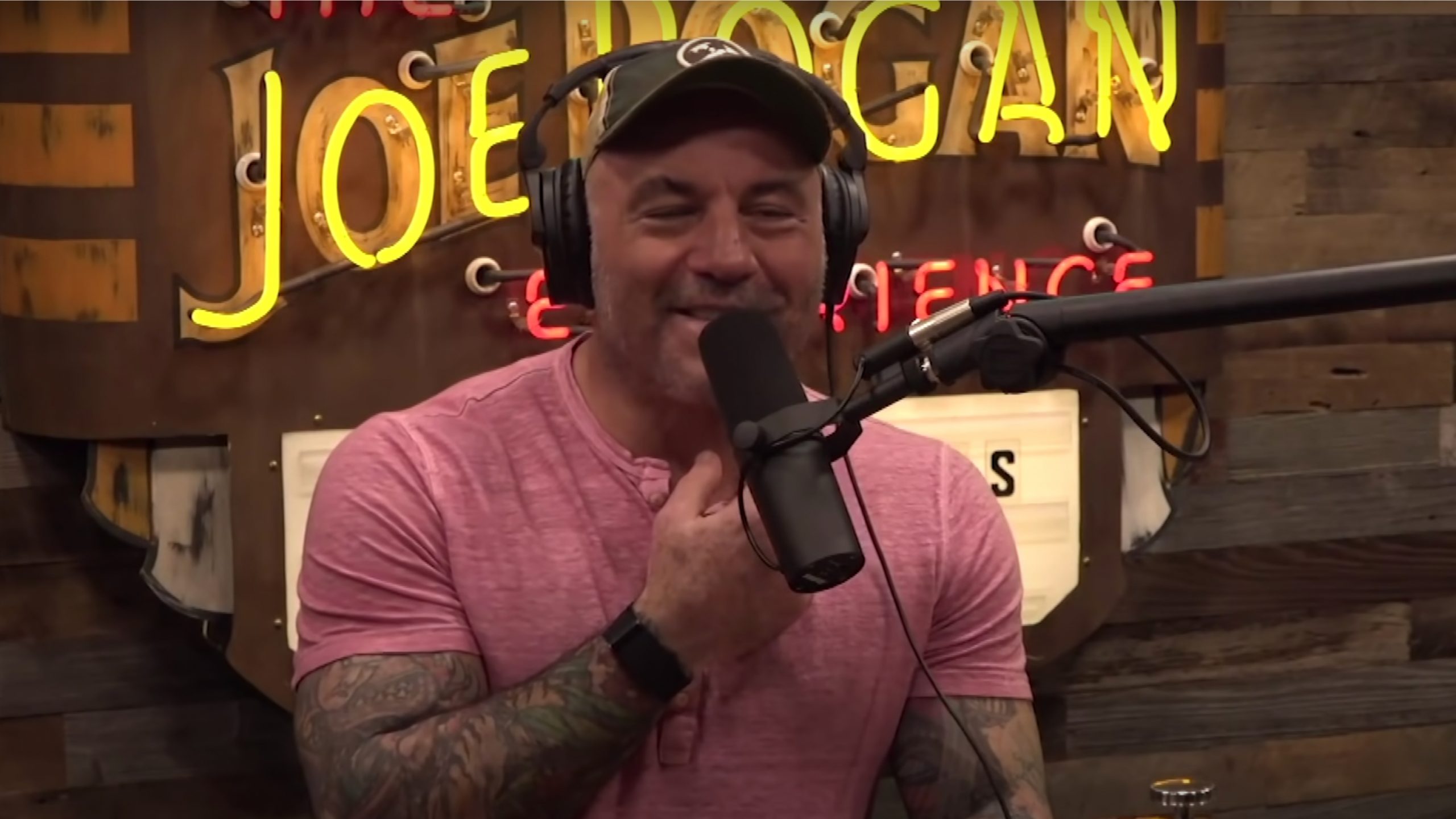 Joe Rogan, one of the world’s most popular podcasters, is being targeted again, this time for sharing his opinion on whether young people should get the COVID-19 vaccine.

The attempts to cancel Rogan began after a clip from his recent podcast with comedian Dave Smith went viral on Twitter.

In the clip, Rogan begins by stating “I think for the most part it’s safe to get vaccinated, I do, I do” but adds that in his opinion, young and healthy people shouldn’t get vaccinated:

“But if you’re like 21 years old and you say to me, ‘Should I get vaccinated?’ I’d go ‘No. Are you healthy? Are you a healthy person? Like look, don’t do anything stupid, but you should take care of yourself. If you’re a healthy person and you’re exercising all the time and you’re young and you’re eating well, I don’t think you need to worry about this.'”

He also shares his concerns about employers forcing people to get the COVID vaccine and describes his personal experience with his children getting the coronavirus:

“Both my children got the virus. It was nothing. I hate to say that. If someone’s children died from this, I’m very sorry that that happened. I’m not in any way diminishing that. But I’m saying the personal experience that my children had with COVID is nothing.

One of the kids had a headache, the other one didn’t feel good for a couple of days. I mean not feel good like, hmmm, no big deal. No coughing, no headaches, no aching, no, like, in agony, there was none of that. It was very mild. It was akin to them getting a cold.”

Smith also discusses how some people that get vaccinated are putting on a theatrical display and virtue signaling.

“I’m not injecting my daughter with something to fucking virtue signal,” Smith said. “If there’s something that she’s of no risk, statistically has no risk from, I’m sorry, I’m not taking any experiment on her.”

Rogan concludes by describing his amazement that someone stating they don’t want to get their child vaccinated is controversial:

“It’s amazing that that’s controversial. That even saying that ‘I’m not going to inject my child with a vaccine,’ is controversial. It’s crazy. Because again, we are not even talking about the flu which we just found out that killed 22,000 people last year. We’re not talking about that. We’re talking about something that is not statistically dangerous for children. But yet, people still want you to get your child vaccinated which is crazy to me. Like, you should be vaccinated if you’re vulnerable.”

Activist group Media Matters were sure to frame its headline to highlight Spotify’s association with Joe Rogan, a common technique when trying to apply pressure to a platform. 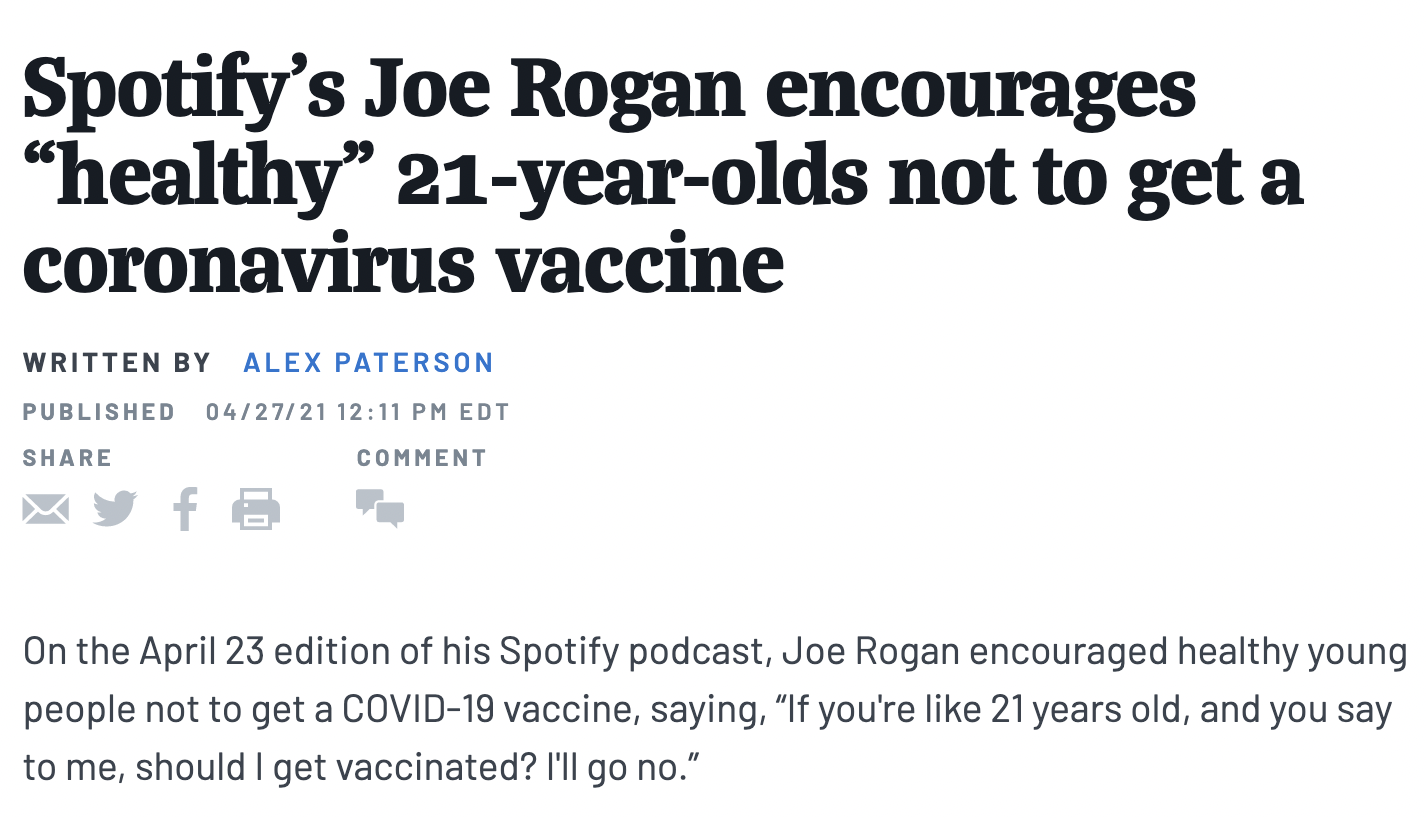 The Verge went into specifics about the terms under which Rogan’s show could possibly be allowed to exist.

“A source close to the situation says Spotify reviewed this Rogan episode and left it live because he doesn’t come off as outwardly anti-vaccine. He also doesn’t make a call to action, this source says, noting that the company has taken down other, explicitly anti-vaccine podcasts and music,” The Verge reported.

While there were several viral tweets in support of Rogan that agreed with his statements, Twitter’s trend highlighted the criticism Rogan was receiving.

Several viral tweets also responded to the clip by claiming that Spotify, which exclusively hosts the full-length versions of Rogan’s podcasts, is “trying to kill people with dangerous disinformation” and demanded that Spotify fire Rogan. 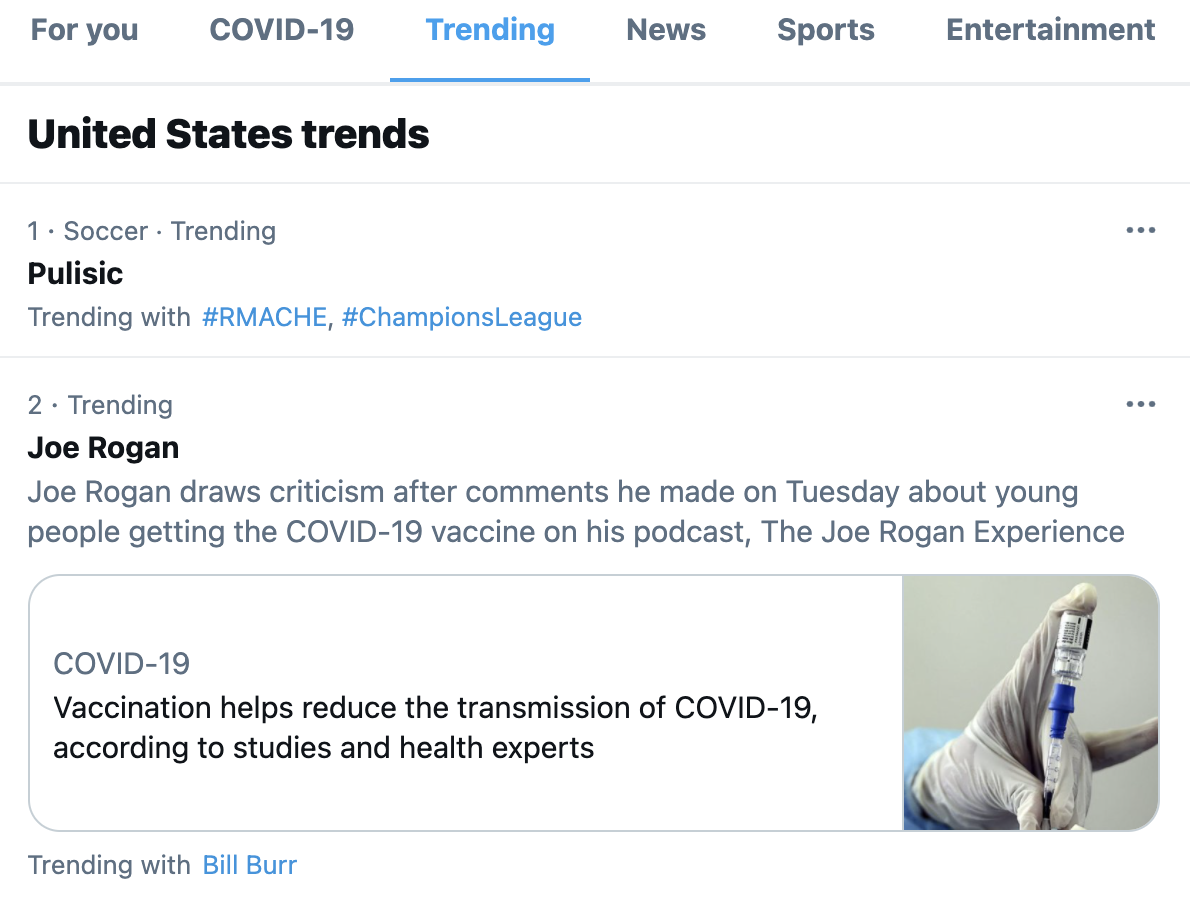 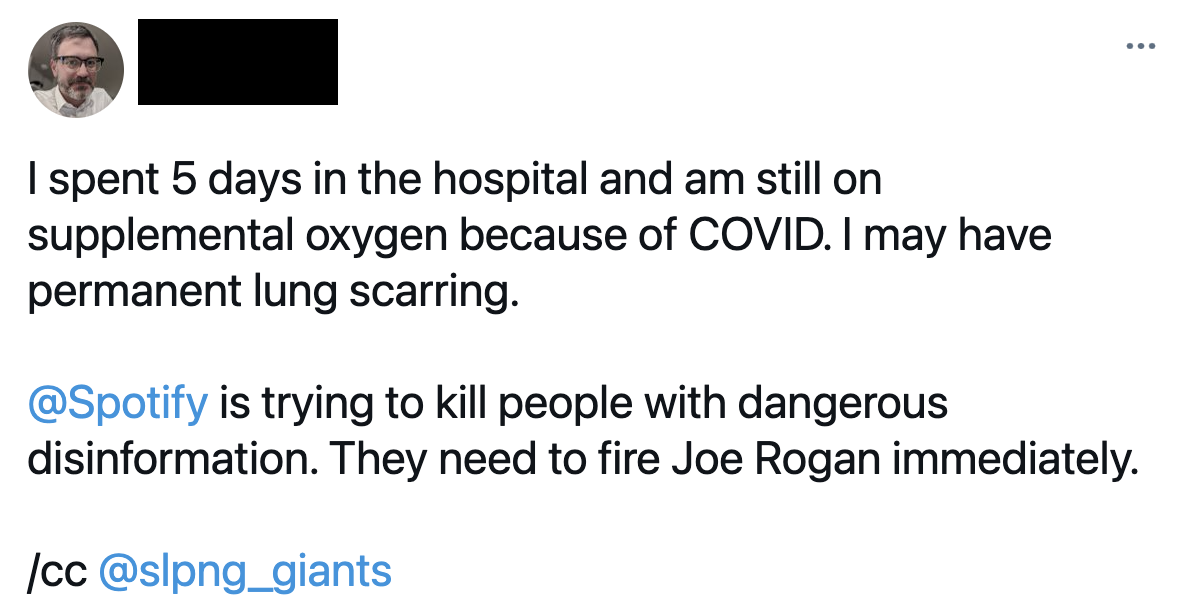 This isn’t the first time critics of Rogan have attempted to get Rogan fired over an opinion he shared on his podcast. Last month, transgender mixed martial arts fighter Fallon Fox demanded that Spotify cancel Rogan’s show after Rogan suggested that “trans women” have an unfair advantage over biological women when participating in women’s sports.