Election day is over in the US, but the high drama and all sorts of controversies continue to play out on social media, where yet another official, a member of the Georgetown, Kentucky city council is now under pressure to resign for her Facebook post.

Karen Tingle-Sames posted on the giant social network this week, causing not only debates between people holding different opinions – but as has become customary, those disagreeing with the councilor are asking for her “head” – i.e., her resignation.

The post that caused the furor showed Joe Biden and members of his campaign celebrating their declared victory in the US election, as Tingle-Sames asked ironically if this is what makes Americans feel proud – and described some of the people in the picture as, “crack pot little girl Hunter and creepy sell out China Joe.” 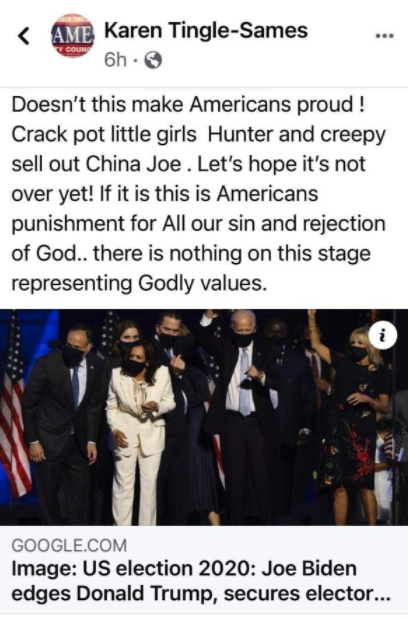 This informal language and the reporting about him and his family members (though largely suppressed by the media) was taken as an opinion that an elected official is not allowed to hold.

While the question then becomes what are elected officials supposed to do – other than fall in line and keep quiet, the other part of the post reveals Tingle-Sames’ religious feelings, declaring that “nothing on this stage represents Godly values,” and that if Biden’s victory is confirmed, it will mean that Americans are punished with such a president and administration for their “sins and rejection of God.”

“In a Zoom conversation with LEX 18 Tuesday, Smith and three other activists said they were disgusted by the post and demanded that Tingle-Sames resign.

“I don’t care about somebody having an opinion,” Camille Overstreet said. “But as an elected official, you have that added responsibility. And you should feel the weight of that on your shoulders and you should carry it with you, because they have to work in the best interest of the community, and that’s not what she’s doing,” she said.

Tom Prather, the mayor of Georgetown, said he cannot compel Tingle-Sames to resign but he did not shy away from letting the community know where he stood.”

But in the end, Tingle-Sames did what most of those who dare to speak out on social media in these months and years eventually do when they are cornered by outrage mobs – she deleted the post, even though standing by her original comment that “Godly values” and Biden just don’t go together.

Speaking to NBC-affiliated local outlet LEX 18, Tingle-Sames said that she might have phrased her message better, while the Georgetown mayor, who was one of those commenting on the post to admonish the councilor, admitted that he “cannot simply compel her to resign.”

As for Tingle-Sames, she is responding to what’s said to be hundreds of (negative) comments by saying she is working to contact some of her critics to better understand their point of view.