The party wanted an LGBT candidate...but only one that would conform.
Share

If there’s one thing you might learn from reports about the collapse of an attempt by the Liberal Party in the upcoming elections in Canada to co-opt an LGBT candidate – it might be that local media are now pioneering the use of the “LGBTQ2I+” acronym – possibly to keep things up to date and squeaky clean, language and political correctness-wise.

In that climate, John Gardner, with his 2017 “offensive” Facebook post really stood no chance of continuing his quest to run in the New Brunswick provincial election on behalf of the Liberals.

The Facebook post Gardner made three years ago, that is now deemed as offensive, reads, “In an age of sanitizing history and not offending anyone isn’t it time the LGBT community stop offending the Christian and Jewish community and stop using the rainbow as their symbol, as it has strong biblical significance.”

If in 2017 it seemed to Gardner that we were in “an age of sanitizing history and not offending anyone” – let’s see what he had to say about the situation these days, not least after the New Brunswick Liberals acted quickly to cut ties with him in the wake of the digging up of his past activity on social media.

“It has been an interesting period running for public office,” Gardner, who identifies as a part of the LGBT community, said on Facebook. 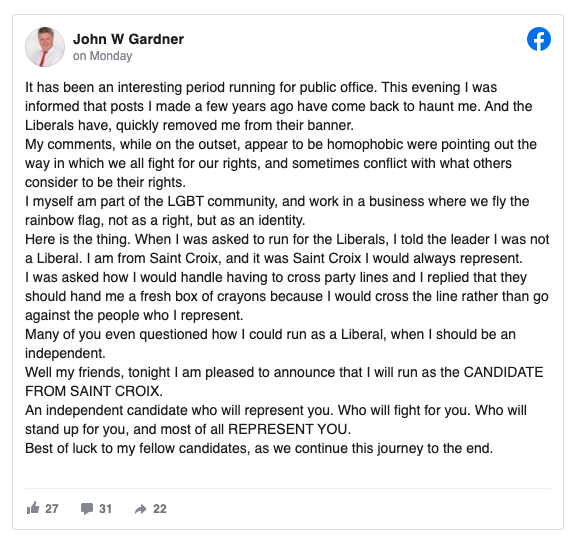 The post also reveals that Gardner is not actually a member of the country’s ruling Liberals – led by Prime Minister Justin Trudeau – but had been asked by the party to run on their local ticket.

Since he describes himself as a member of the LGBT community and one working in a business that in fact flies the rainbow flag “not as a right, but as an identity” – those might have been precisely the reasons the Liberals approached him in the first place.

But now, after the party dropped him at the first sign of cancel culture online trouble, Gardner said he would continue the election race as an independent focusing on representing his entire Saint Croix community.

The local branch of the Liberals, meanwhile, announced that Gardner was no longer suitable because of his past social media comments that are described as “offensive to both women and the LGBTQ2I+ community.”

As an interesting sign of the times in Canadian politics ahead of the September 14 election, New Brunswick Progressive Conservative party also tried to disavow its candidate, Roland Michaud, for a 2018 Facebook that is said to have encouraged violence against transgender people.

Michaud at the time reposted a meme saying, “A man followed a young girl into a Target bathroom in Texas saying that he self-identified as a woman. The man’s teeth were knocked out by the girl’s father, who says he self identifies as the tooth fairy.”