And it pretty much confirms what you've likely been suspecting all along - that most modern journalism is pretty much writing controversial rage-bait trash for clicks.
Share

Business Insider is hardly a paragon of journalism, and some would even argue that it isn’t about journalism at all – or a paragon of anything, really.

But, “haters” aside – what Jack Crosbie, a writer who says he covers politics, culture “and whatever else publications will pay him to cover,” has done here doesn’t do much to elevate the standing of this particular publication or the journalism industry as a whole.

It would appear that his negative review of Animal Crossing was published under the “whatever the publication pays to be covered” category – although it did run as “opinion.”

His Business Insider article states that although many have grown to love Animal Crossing as a calming game to take people’s minds off of the coronavirus quarantine woes – he disagrees.

And he’s not the only one, as he dutifully links to other negative articles about the game, to back up his own position.

Crosbie appears to be a man of action and there simply isn’t enough of it in Animal Crossing. The turmoil all around him caused by the pandemic is apparently not enough, and he says the game is actually immensely boring, and also hates its interface and “meaningless” characters.

No problem so far – that’s his opinion. After all everyone has one, and Business Insider mentions prominently that the hit-piece is “an opinion column.”

But before the article was actually published, Crosbie took to Twitter to promote this opinion in a post  that summed up his findings which later saw the light of day on Business Insider.

Animal Crossing, he said, was a bad game – unless you invested a lot of time in it or played with friends.

At this point, Crosbie was not being particularly interesting himself as he was just discovering how gaming works – but then he gifted his Twitter audience with this gem:

“Who will pay me to write this post I’ll do it for cheap,” he tweeted (we think we now know who), and then followed up with this: 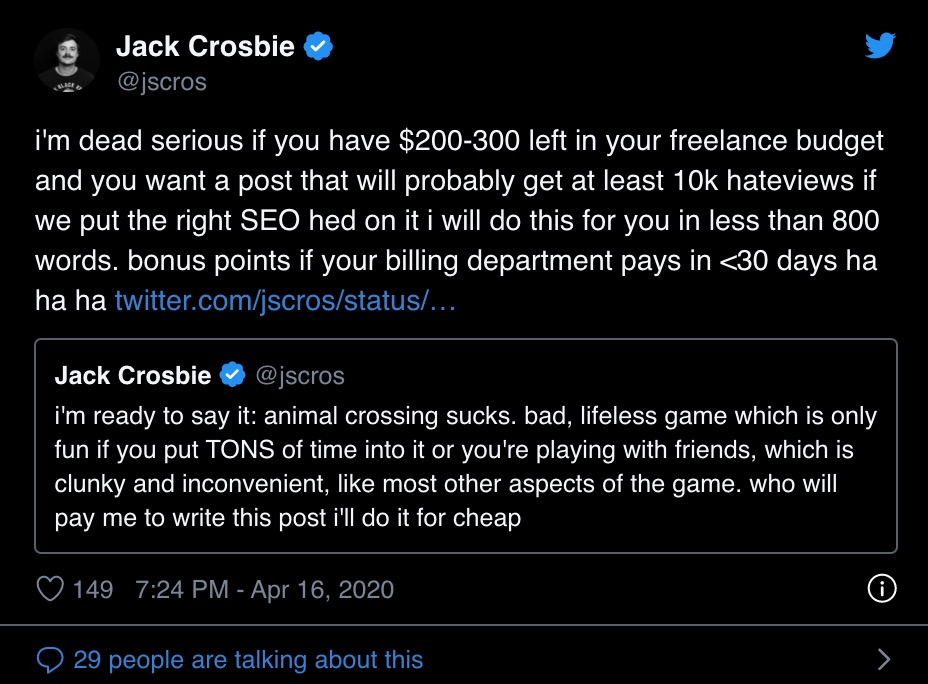 “I’m dead serious if you have $200-300 left in your freelance budget and you want a post that will probably get at least 10k hateviews if we put the right SEO hed on it I will do this for you in less than 800 words. Bonus points if your billing department pays in

Translation: this author, unfortunately like too many in the media these days, can write successful and affordable inflammatory clickbait that’s intentionally provocative and controversial to drive “hateclicks,” and therefore ad revenue.

(It’s interesting to consider what ethical standards guide him when he covers his other stated “journalistic” beats, namely, politics and culture).

But, unlike others, at least he admits it.