Telegram is skyrocketing in growth, as people are suddenly waking up to the dangers of Big Tech monopolies.

“People no longer want to exchange their privacy for free services. They no longer want to be held hostage by tech monopolies that seem to think they can get away with anything as long as their apps have a critical mass of users.”

The ongoing showdown that corporate media and Big Tech have stepped up to the maximum with the excuse that one incident – such as the several hours of unrest on US Capitol last Wednesday – can be used handily to stop free speech and open source, has left many users of apps like Telegram wondering just how far this purge will go.

This has become an especially hot topic after Parler, which was a thorn in the side of big media ever since November’s election in the US – got thoroughly deplatformed: first Apple and Google banned it from its stores with the pretext that it was responsible for, basically, allowing free speech (it otherwise guarantees it as the selling and differentiating point compared to the tightly policed and self-censored giant social networks). If that wasn’t enough, Amazon Web services also denied Parler hosting.

With all this in mind, a question asked of Telegram’s founder Pavel Durov has been whether he can guarantee that Telegram will stay up despite the obvious and mounting pressure on apps and developers – and, essentially, if the company has contingency plans in dealing with any possible attack on its viability. 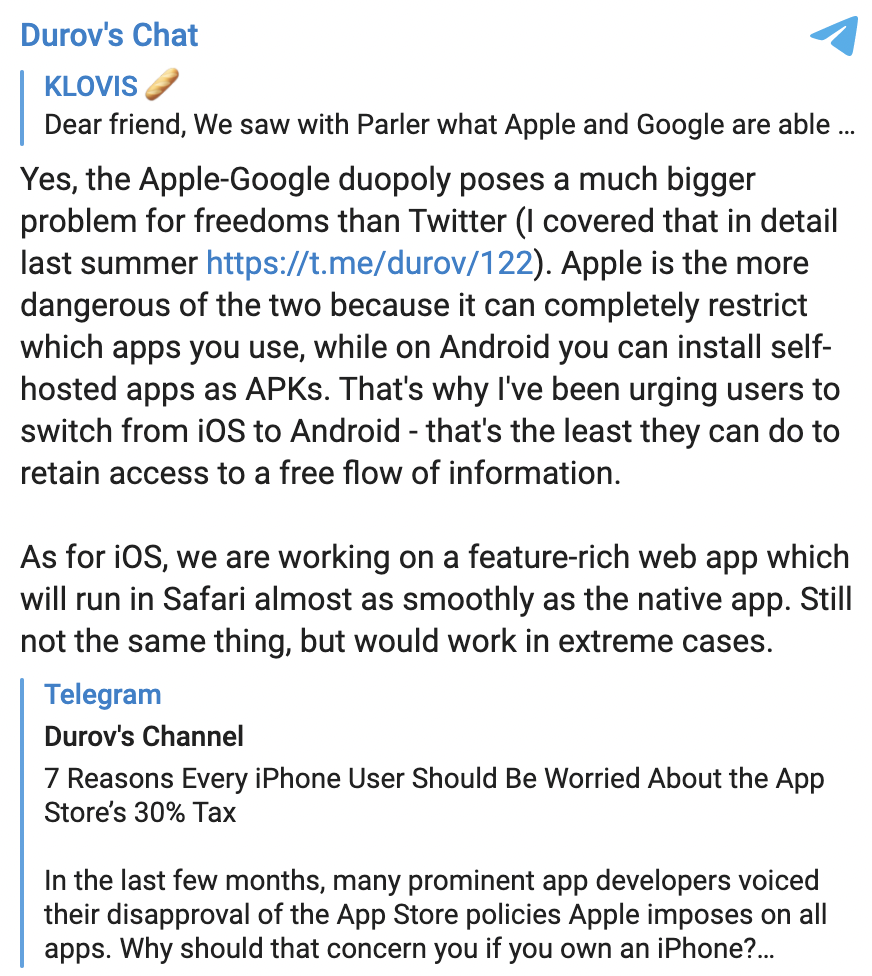 Pavel Durov is no stranger to pressure from the highest places or to fighting back against a country’s entire apparatus (in his case, for now at least, that was Russia); that is why he is living in voluntary exile while Telegram’s servers are located abroad.

As for whether Telegram would be able to withstand deplatforming and outright banning pressure from the US – his answer is twofold: first, don’t use Apple’s devices, because its walled garden makes it that much more difficult for users to choose which apps to run. But even there, Telegram apparently plans to offer “a feature-rich web app which will run in Safari almost as smoothly as the native app” – in case the real thing, i.e., the official app, gets banned.

As for Android – users can still install apps using self-hosted AKPs there, he noted, and once again recommended this mobile OS over its only true competitor, Apple.

And Durov had another useful observation: though on the social media front Twitter is louder than Google and Apple, it is by no means the most “dangerous” of the three. Follow the money trail. Beware of duopolies.