Apple has followed through on its threat to ban free speech social network Parler from the App Store after demanding that the app hold itself to an impossible standard and take responsibility for all the user generated content posted to the app.

The ban means that Parler will no longer be to reach the more than 1 billion iPhone users via the App Store and there will be no way for new Parler users on iPhone to download the official app to their phone. Existing users who downloaded the app will be able to access it for now but Parler will be unable to push updates to those users.

Apple banned the app after it had shot to the top of the App Store and was getting an estimated 200,000 installs per day. This influx of new installs followed Big Tech engaging in its biggest ever mass censorship campaign to date with President Trump and thousands of other users purged from Big Tech platforms since Wednesday. 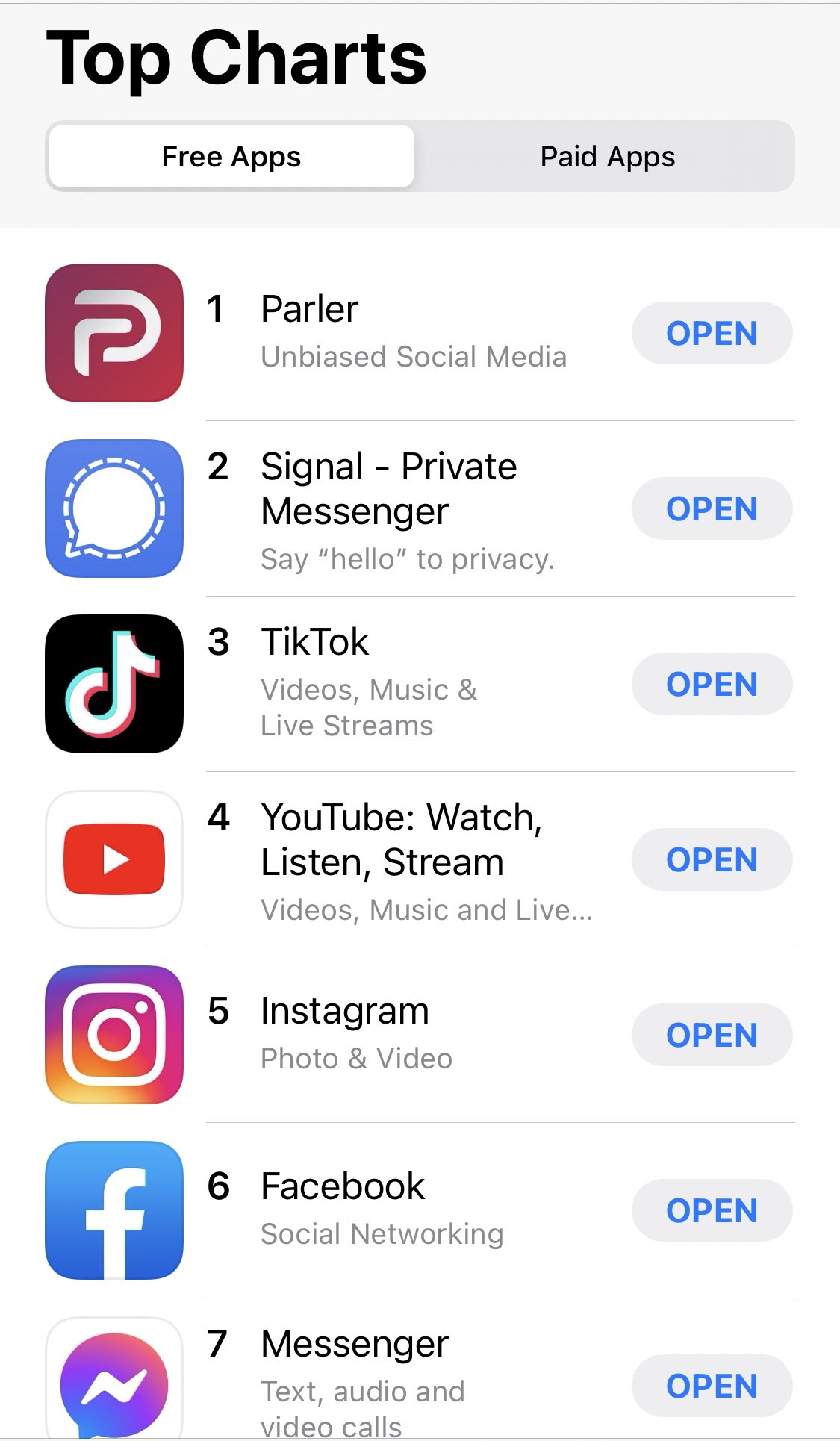 In its statement on the banning of Parler, Apple claimed that Parler had failed to take adequate measures to address “threats of violence and illegal activity.”

Parler does have policies against violence and illegal activity which Parler CEO John Matze states the company “will and always have enforced.”

And threats of violence and illegal activity can be found on other Big Tech social media apps that are available on the App Store such as Facebook and Twitter. Yet Apple allows these apps to remain while swiftly cracking down on Parler.

In a statement, Matze highlighted the double standard with which Parler is being treated and noted that today, threats of violence weren’t just allowed on Twitter but were actively promoted via Twitter’s trends:

“Apple will be banning Parler until we give up free speech, institute broad and invasive policies like Twitter and Facebook and we become a surveillance platform by pursuing guilt of those who use Parler before innocence.

They claim it is due to violence on the platform. The community disagrees as we hit number 1 on their store today. The same day ‘Hang Mike Pence’, a disgusting violent suggestion, was trending nationally on Twitter. Displaying the horrible double standard Apple and their big tech pack apply to the community.

Apple, a software monopoly, provides no alternatives to installing apps on your phone other than their store. We do not own our phones, Apple simply rents them to us. Apple, Google and the rest of the anti-competitive pack of big tech tyrants coordinate their moves and work together to stifle competition in the marketplace.

More details about our next plans coming soon as we have many options.”

In its threat to ban Parler yesterday, Apple told Parler: “We want to be clear that Parler is in fact responsible for all the user generated content present on your service and for making sure this content meets App Store requirements for the safety and protection of our users.”

Based on this standard, Apple is responsible for today’s “Hang Mike Pence” trending topic in the Twitter app and all of the other threats of violence and illegal activity that are posted to other Big Tech apps.

Yet this rule isn’t applied consistently. Big Tech companies are given a pass while the rule is used as an excuse to ban smaller alternatives.

Conservative commentator Dan Bongino, who is an investor in Parler, slammed Apple for banning Parler:

“The tech tyrants at Apple have pulled the app from their App Store. Apple is no different than the Chinese communist party in their preference for totalitarian thought control. I’m proud of the remaining liberty-loving people of this great country. And I’m embarrassed, and horrified by the tech totalitarians who’ve taken control of it.”

“The trifecta of anti-civil liberties liberals, media totalitarians, and the tech tyrants, is the greatest threat to freedom and liberty that this country has seen in a generation. This is a demonstrable fact. Denying this is delusional.”

Apple’s crackdown on Parler follows Google banning the app from its Google Play Store yesterday. As a result, two powerful tech companies have blacklisted Parler from the world’s two major app stores in a 24 hour period. These app stores are responsible for over 99% of all app installs on smartphones so Parler is essentially being blocked from providing its app to all smartphone owners.