Free speech focused platforms are growing at record rates but Trump continues to rely on the Big Tech platforms that censor his speech.
Share

In August, Facebook CEO Mark Zuckerberg ominously stated that Facebook is “getting people ready for the fact that there’s a high likelihood that it takes days or weeks to count this — and there’s nothing wrong or illegitimate about that.” He also warned that the platform would be introducing “new rules regarding premature claims of victory or other statements about the results.”

Since that moment, Facebook and the other Big Tech companies have been grooming US voters to accept the unprecedented level of uncertainty that’s now unfolding around the 2020 US presidential election results and normalized the notion that anyone who questions this uncertainty should be censored.

From election night, the Big Tech companies followed through on this election night narrative that they have been crafting for months by mass censoring President Trump and many other users who attempted to discuss and share their opinion on election developments. 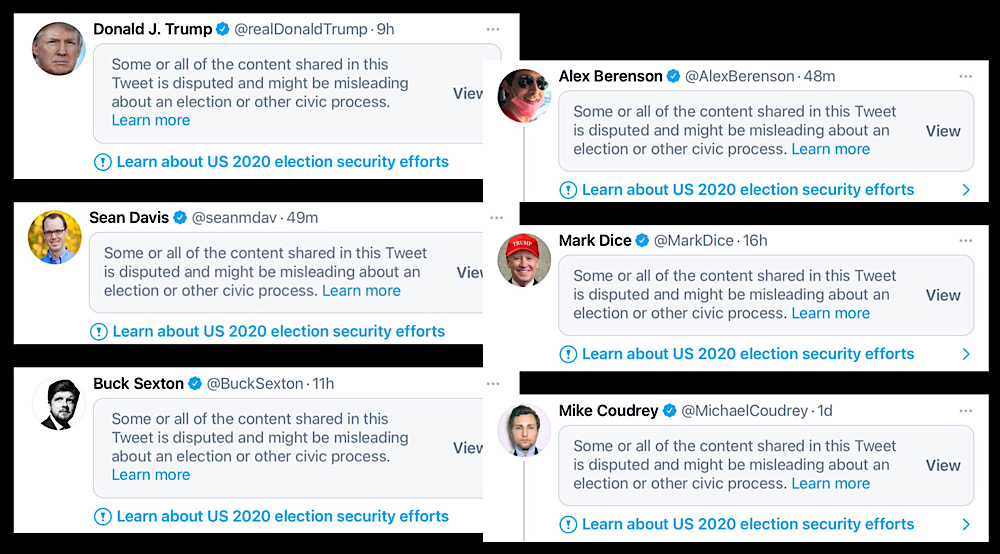 Yet while Big Tech’s censorship of election-related statements has gone into overdrive since election night, the signals that this would happen have been apparent for years.

As users of Big Tech platforms have grown frustrated with the mounting censorship, free speech focused platforms such as Gab, Minds, BitChute, LBRY, and Parler have experienced rapid growth.

These free speech platforms have created a space for their users that’s free from censorship and on election night, users of these platforms were able to openly discuss the election without their statements being restricted or removed.

Gab’s unfiltered mirror of Trump’s Twitter feed demonstrates the freedom Trump would enjoy if he were to embrace these platforms.

But despite these free speech platforms offering the President a platform where he can speak freely, Trump has so far rejected them. Instead, he continues to use Big Tech platforms to communicate with the world and has chosen Twitter, the platform that throttles him the most, as his preferred broadcasting tool.

A recent analysis highlighted the huge impact Big Tech’s censorship has on Trump’s ability to reach people. According to the analysis, the shares and replies on one of Trump’s election night tweets dropped by more than 5x after Twitter censored it.

And the ripple effect of Trump staying on these Big Tech platform is much greater than fewer people seeing his statements because of the censorship.

Most mainstream media outlets support censorship and consistently pressure Big Tech platforms to escalate their censorship efforts. The Silicon Valley giants willingly bow to this pressure and constantly restrict what the President and other users are allowed to say.

This media pressure combined with the mounting censorship distorts the narrative around Big Tech censorship. It gets positioned as a positive thing and normalized by mainstream media outlets which then makes the general public more willing to accept future censorship.

This creates a vicious cycle where the level of censorship snowballs because of the continuous pressure and normalization.

Since 2016, Big Tech platforms have become increasingly emboldened by the normalization of their censorship and now censor millions of posts each quarter based on vague, subjective buzzwords such as “hate speech” and “misinformation.”

By embracing free speech platforms, Trump could change the dynamic. If free speech focused platforms were the default launching point for his statements, they would be seen by more people.

The mainstream media pressure to censor social media posts would be weakened because this pressure would be directed at platforms that won’t bow down to their censorship demands.

Regardless of whether the President now chooses to embrace these free speech platforms, the trend is clear.

Free speech focused platforms will continue growing because users are sick of Big Tech censorship. The Silicon Valley giants will continue to scale up their censorship efforts, even if it causes their overall user base to decline.

If Trump had embraced free speech platforms in 2016, he could have accelerated the growth of these platforms that value open discussion and shifted the dynamic around censorship. But by failing to embrace free speech focused platforms now, Trump isn’t just risking his statements being censored, he’s risking complete termination of his social media accounts.

Democrats are aggressively pushing for Trump to be deplatformed, mainstream media outlets are amplifying these calls, and Big Tech almost always complies with pro-censorship pressure.