JAMA, an international peer-reviewed medical journal, has been attacked by some Twitter users for publishing a study entitled, “Racial/Ethnic Variation in Nasal Gene Expression of Transmembrane Serine Protease 2 (TMPRSS2).”

This is one of the many scientific papers dedicated to researching coronavirus. But the way the journal announced it on Twitter, by referencing “Black individuals,” has caused what looks like a knee-jerk reaction among the activist-prone subset of users, with some posts implying racism as they called for the study to be “canceled” by the journal.

RELATED: Twitter is an echo chamber of insanity and it is impacting academia

And it doesn’t seem as if they would mind if the scientific method also got “canceled” along the way.

“Given the essential role of TMPRSS2 in SARSCoV2 entry, higher nasal expression of TMPRSS2 may contribute to the higher burden of COVID19 among Black individuals,” JAMA’s post linking to the paper said. 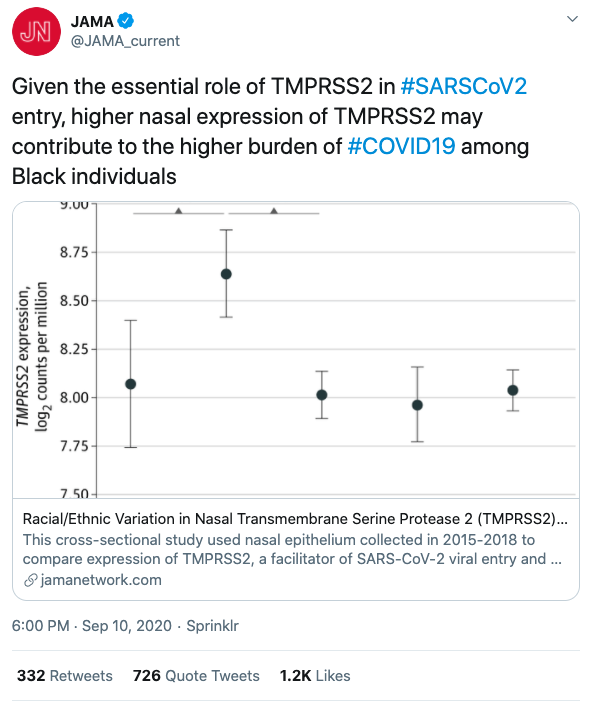 The study, produced by three researchers from Genetics and Genomic Sciences and Pediatrics departments of Icahn School of Medicine at Mount Sinai, New York, looks into how Covid-19, caused by the virus, has affected non-white communities.

In some parts of the US, they said, infection and death toll from the disease has been disproportionate to the point of being two to three times higher among the black population. The study’s goal was to find out why this may be the case, and it looked into self-identified race/ethnicity to offer some potential answers.

Some Twitter users called for the study to be retracted without delving any deeper into why – while another whose passion seems to be defunding the police had clearly only read the headline before proclaiming that it was “terribly fluffy.” 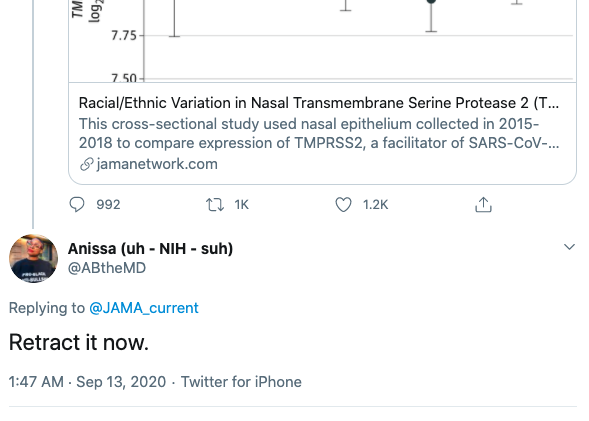 Race is a social construct, this user argued, and seemed more interested in the use of the word “black” than in the content of the study. When one of the commenters explained that the abstract said that race/ethnicity in the study, including the term “black,” was self-identified, the user offended by the headline replied, “Okay, yes I have now read the abstract.”

But they would not let go of the criticism of the paper, rejecting its approach and finding some “more likely” causes for higher mortality rates among black Americans infected with coronavirus.

Among these causes cited as being “more likely” than the medical and biological ones are racial disparities and social determinants of health.