The student leadership at Skidmore College, NY, blocked an effort by students to form a Young Americans for Liberty chapter, claiming the club is a hate group that promotes “alt-right” agendas. Members of the club believe a “cancel culture” campaign was the reason for the rejection.

Young Americans for Liberty (YAL) is a pro-liberty nationwide activism group for college and university students with hundreds of chapters across the country. According to its website, it is “the most active and effective pro-liberty youth organization advancing liberty on campus and in American electoral politics.”

Hannah Davis, a junior at Skidmore College, led the effort to form a YAL chapter at her school. She created an Instagram page to mobilize interested students.

But a campaign against her effort soon began. A petition, titled “Stop Skidmore College from Approving the Young Americans for Liberty Club,” was launched. It alleged that the pro-liberty organization’s “proclivity to spread hatred cannot be tolerated,” and continues to reference past controversial events by other YAL’s chapters.

“YAL’s pattern of racism, homophobia, and transphobia cannot be disputed. Skidmore must make no space for this kind of open bigotry on campus,” the petition reads.

Aside from the petition, which now has more than 1,700 signatures, there were were more than 100 negative comments on the Instagram page Davis created for the chapter, with some critics saying YAL should be “barred from colleges and universities.” 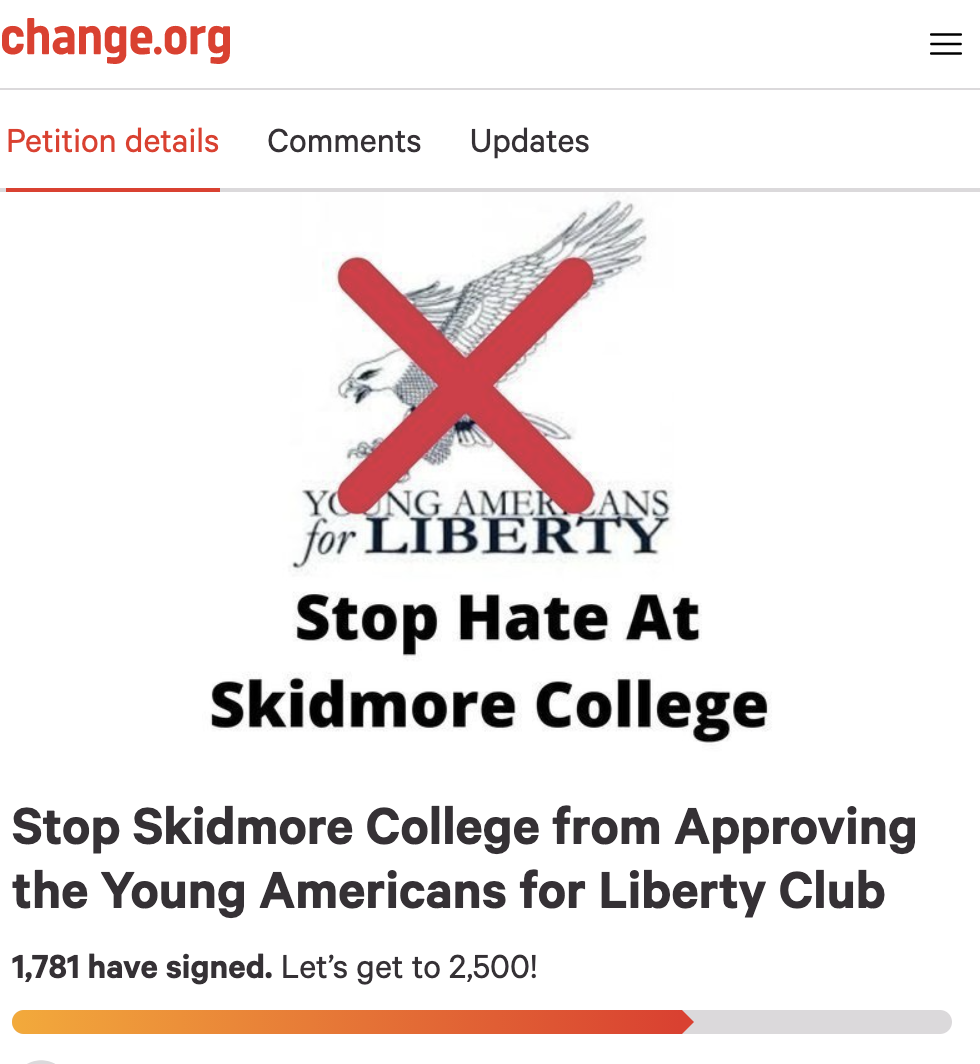 The Student Government Association then told Davis that the chapter could not be formed because of “concerns of hate speech and making students on campus feel unsafe.” She was also told that YAL “would not have a healthy and sustainable future at Skidmore, and it was beyond reasonable doubt that it would be unsuccessful.”

Davis believes the “cancel culture” campaign was responsible for the disapproval from the student leadership, arguing that the potential YAL chapter at Skidmore had not participated in the hateful behavior opponents of her efforts were citing.

“A cancel culture campaign was organized against us which they coined as holding students accountable for their actions,” Davis told Times Union.

“YAL at Skidmore has not participated in any of the hateful behavior that they want us to take accountability for. This idea of collectivized guilt resulted in members of our chapter being forced to leave due to harassment. I have been subjected to endless harassment, false accusations and threats of violence in which Skidmore has been slow in addressing properly.”

The political science student plans to appeal the decision. However, the college’s administration is not keen on intervening because “the student leaders whom our students have elected as their representatives have the right to vote to decide the outcome of this process.”

“This is an important part of the educative experience for our students as they freely conduct their affairs and think about public discourse, civic engagement and campus culture,” the college’s president told Times Union in a statement.

According to YAL, the barring of the formation of a chapter at Skidmore is another example of the intolerance of alternative views.

“Unfortunately, the events that have transpired at Skidmore College are another glimpse into the Orwellianization of higher education in America,” YAL communications vice president Reed Cooley told The College Fix.

“Modern academia has been supplanted with a higher education cartel, keen on converting young Americans into foot soldiers for the radical left and its dystopian agenda. If learning, open discourse, and freedom of thought were really valued by the school’s student ‘leadership’ … they would not be attempting to silence YAL’s voice on campus,” Cooley added.

Cooley also hinted that YAL was not giving up on the effort to form a chapter at Skidmore.

“What they fail to understand, however, is that banning conservative and libertarian voices only makes them stronger, inspiring them to fight back even harder against their dogmatic, narrow-minded culture of campus tyranny,” he said. “YAL proudly stands behind Hannah Davis and our chapter at Skidmore College, and all options are on the table moving forward.”