More manipulation from the internet's most trusted sources.
Share

Not being social enough used to be a problem, but now with the coronavirus pandemic, shaming those not properly observing social distancing instructions has become a thing. One way to prove and call people out, especially in the media and online, are photos that supposedly prove they are breaking what’s considered a life-saving rule.

But unfortunately, some media outlets are demonstrating that “misinformation” around the crisis is a wider category than you might think at first – and can be simpler to achieve than creating “deepfakes” or complicated conspiracy theories.

Former British athlete, now a commentator, James Cracknell, learned about this the hard way and shared it with Twitter. 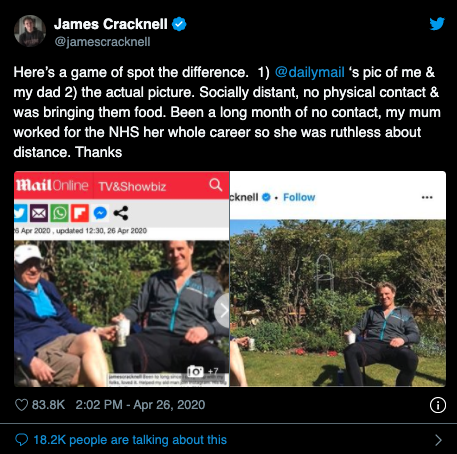 Cracknell posted two photographs showing him with his elderly father: one published by the Daily Mail that appears photo-edited to show them sitting close to each other (considered dangerous behavior these days), and another, which he says is the original, where they are seen sitting “socially distant” and without any physical contact.

Some of the commenters still found Cracknell’s decision to spend time with his parents at all, after bringing them food, questionable, but most were angry at the state of the media and journalism in general.

Manipulation of one kind or another, especially with headlines and photos has been a part and parcel of the media world even before there was clickbait; but now, with outlets cash-strapped and struggling to compete, things are only getting worse.

An article published by Bored Panda shows just how easy and old-school it is to manipulate reality through photography even without any editing, particularly in view of the social distancing frenzy.

Two Danish photographers, Olafur Steinar Gestsson and Philip Davali, proved this by running an experiment: taking pictures of the same scene with several people in the shot, but using two different techniques: by a wide-angle, and a telephoto lens.

And depending on the different angles and perspectives achieved by using these different lenses, the results of the same scene captured in these ways are two dramatically different photographs, showing people as either quite a bit apart, or very close together.

“As producers of photography, we have a responsibility to draw attention to the fact that images in some cases does not show the proximity of objects as people seem to believe,” said Kristian Djurhuus of the Ritzau Scanpix agency.