The two powerful pro-censorship groups will also be sharing data with the financial industry, policymakers, and law enforcement.
Share 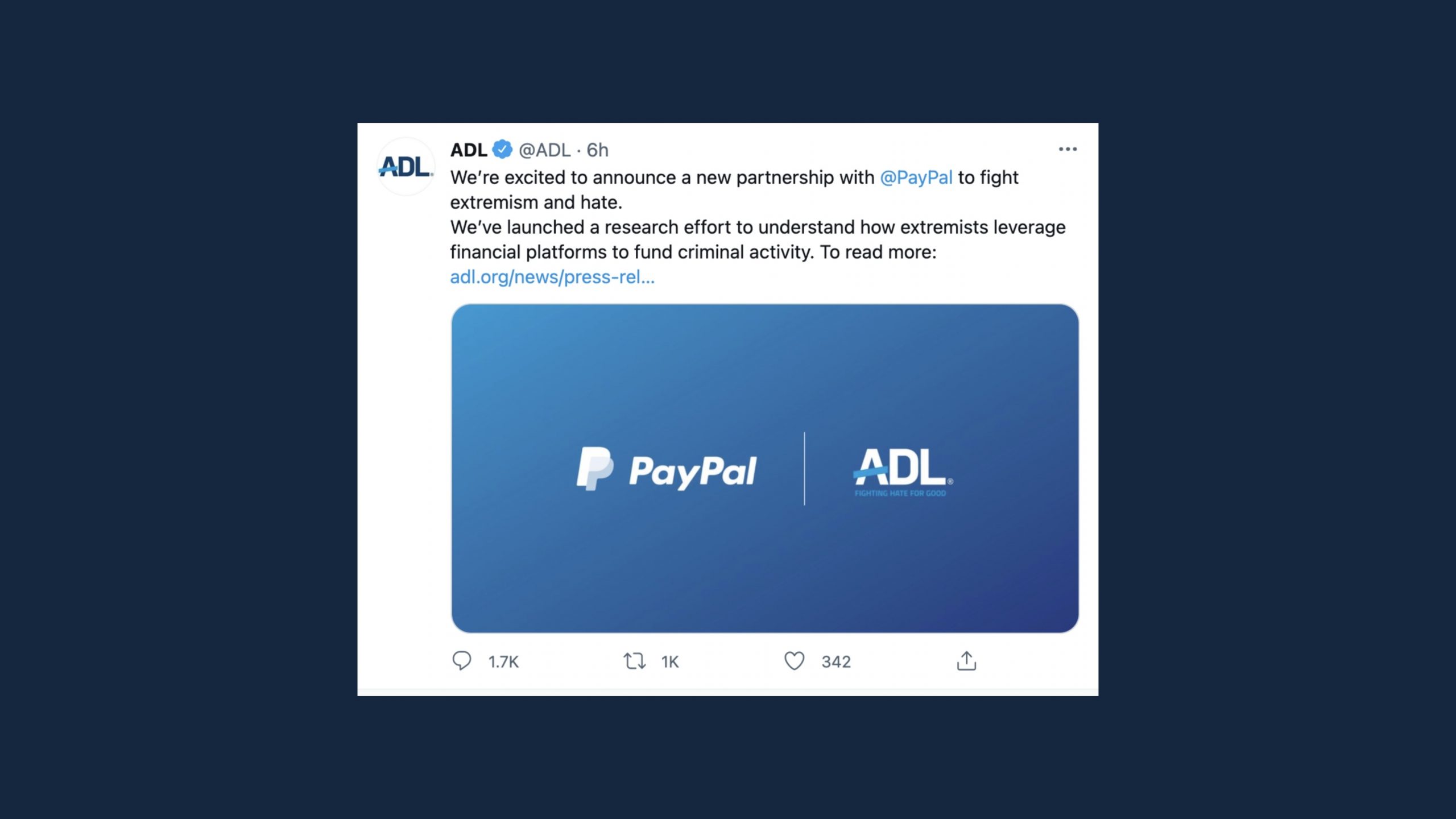 PayPal, one of the world’s biggest digital payments companies, and the Anti-Defamation League (ADL), an “anti-hate organization” that regularly pushes for increased online censorship, have announced a new partnership that will focus on “attacking” the revenue sources of groups and individuals that they deem to be “profiting from all forms of hate and bigotry against any community.”

In a blog post, the ADL said the goal of this new partnership is “to fight extremism and hate through the financial industry and across at-risk communities.”

The ADL added: “PayPal and ADL will focus on further uncovering and disrupting the financial pipelines that support extremist and hate movements. In addition to extremist and anti-government organizations, the initiative will focus on actors and networks spreading and profiting from all forms of hate and bigotry against any community.”

Not only will PayPal and the ADL attempt to cut off the revenues of those that they deem to be profiting from hate but they will also be harvesting data on “extremist and hate movements” and sharing this data “broadly across the financial industry,” “with policymakers and law enforcement,” and with “other civil rights partner organizations, such as the League of United Latin American Citizens (LULAC).”

Manhattan District Attorney Cy Vance, Jr. Is publicly supporting this PayPal-ADL partnership and has even offered assistance to this and other similar censorship campaigns:

“I applaud PayPal and the ADL for joining forces to combat hate and extremist movements who seek to utilize financial platforms to bankroll their criminal activities and profit from the spread of racism and bigotry,” the Manhattan District Attorney said. “My office stands ready to assist financial institutions and businesses of all kinds in this urgent fight to stop hate and protect members of historically marginalized communities.”

ADL CEO Jonathan Greenblatt described this partnership as “setting a new standard for companies to bring their expertise to critical social issues” and framed it as “a unique opportunity to further understand how hate spreads and develop key insights that will inform the efforts of the financial industry, law enforcement, and our communities in mitigating extremist threats.”

LULAC CEO Sindy Benavides expressed a desire for more censorship collaborations between the private and public sector in the future and admitted that this partnership is an attack on the revenue sources of anyone that PayPal, the ADL, or LULAC deem to be “hateful”:

“We hope to see more private and public partnerships such as these to help raise the social awareness of the public to the dangers that exist in plain sight. Attacking these hateful groups’ revenue sources weakens their reach and exposes just how unstable they truly are. The data and research collected from experts will help organizations, like LULAC, inform their strategy to combat evil. We congratulate these organizations and will continue to stand alongside them against hate.”

Many prominent civil rights activists have noted that campaigns to censor based on the vague and subjective term “hate” are really just an excuse for those behind the campaigns to grab more power and censor speech they don’t like.

“When people say they want to ban hate speech, what they mean is they want to ban speech that they hate,” former American Civil Liberties Union (ACLU) director Ira Glasser said earlier this year. “But if you allowed something called ‘hate speech’ to be banned, then the only important question would be ‘who decides?'”

But despite these concerns, hate speech rules and laws have proliferated over the last few years and been used to target a wide range of innocuous content such as jokes, archives, and posts from people who are condemning or criticizing the speech of others.

The announcement of this partnership follows both PayPal and the ADL being strong proponents of online censorship in an individual capacity.

Over the last couple of years, PayPal has targeted numerous accounts including those of alt-tech platforms, independent news outlets, and anti-lockdown groups. PayPal also participated in a Facebook boycott that was launched by the ADL and several other groups and called for the tech giant to censor more aggressively.

Some examples of the ADL’s work with Big Tech companies include the ADL being added to YouTube’s “Trusted Flagger” program in 2017 (a program that gives members “prioritized flag reviews for increased actionability” on content that they flag to YouTube and allows them to have “ongoing discussion and feedback on various YouTube content areas”) and the ADL providing direct input to YouTube when it was formulating its controversial June 2019 hate speech rules which have resulted in the censorship of hundreds of thousands of videos.