Fans of true crime podcasting and associated genres have one less show to listen to now as the maker of The Peripheral announced he is shutting it down.

“I sat down to edit the latest Peripheral episode today. I was feeling pretty excited to get another interview out. I hit play and just listened for a bit, but I didn’t hear my own voice talking to the guest. It sounded like a complete stranger – someone who sounded vaguely like me but vacant and devoid of passion and empathy. Ever since the harassment campaign against me, my heart hasn’t been in this. I would like to continue out of respect for the brave and wonderful guests who have shared their stories, but just thinking about hitting the publish button gives me great anxiety. I’m told this podcast is important and changes lives but the thought of exposing myself, my guests, or my family to further ridicule from these online hate groups isn’t worth it. The veiled threats, doxxing, homophobic slurs and rumors is disgusting regardless of their cause. They can high five each other and celebrate successfully taking down another “problematic” podcast.

Sorry for letting all my listeners down or anyone who admired me. These groups have proven that their hate trumps any love and understanding I’ve tried to put out into the world. To those I’ve advised about podcasting, I strongly urge you to reconsider. The bigger your podcast becomes, the more prone you become to criticism, personal attacks, and drama. The toxic culture and harassment will never dissipate. The passion you put into it will be dampened by the vultures of social media.

I felt the need to give an explanation instead of leaving you, the listener, wondering what happened. The current episodes will remain available until I no longer feel like paying for hosting. EDIT: Simply sharing this post has created a new backlash because harassers and cyber stalkers feel so offended that I would make such a statement. Some whom I wasn’t even referring to but they feel I’m speaking them directly because of their hateful obsession with me.”

The Peripheral is a storytelling podcast that interviews crime victims, people suffering from mental illness or those otherwise traumatized, giving them an opportunity to share their personal dark stories involving topics that are usually considered taboo.

The booming podcasting scene often proves to be too much to handle for many creators, so it’s not unusual to see shows come and go – sometimes even successful ones, due to burnout and similar reasons.

But The Peripheral’s creator, Justin – who is known for co-hosting the well-known true-crime podcast Generation Why – claims that his reasons are quite different.

According to the Facebook post, he now essentially has his own “dark” story to tell – that of podcasting and social media, and of having his show chased off the internet thanks to a campaign of harassment launched by what he refers to as “hate groups.”

The maker of The Peripheral further says that both his guests and his family, in addition to himself, experienced “veiled threats, doxxing, homophobic slurs and rumors” on account of his show being viewed as “problematic.” 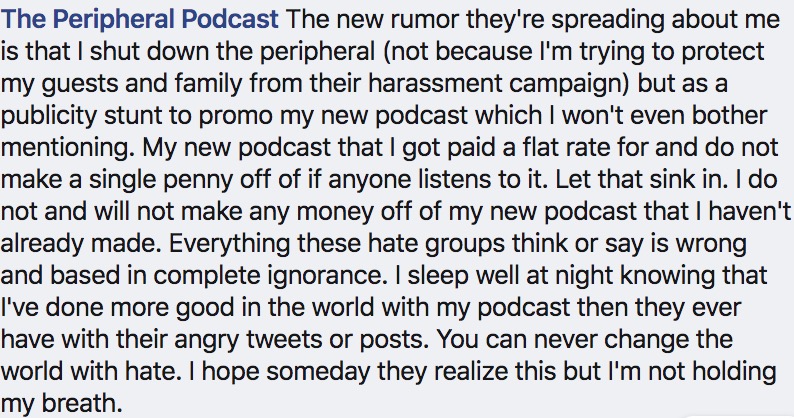 His post indicates that he discovered that, “the bigger the podcast, the bigger the target” – and describes the podcasting scene in extremely negative terms, as a toxic place where creators are subjected to malicious scrutiny on social media.

And while his frustration is coming across loud and clear in the post, it took several days for Justin to go deeper into the campaign against him:

“This campaign against me all stems from the fact that I refused to hate on another podcast.I refused to take part in their public shaming. They claim I “misuse” my platform to actually put out a message of understanding and not hate. These mobs have tried to hijack my podcast groups, spread false rumors about me, and do everything in their power to silence the message that I’ve put out. Let it be known that I will never take part in any public shaming or pile on of another person. It’s been demanded of me many times to take down others and I never have. Unlike them, I do not derive pleasure from destroying others and would rather counter hateful messages with ones of sympathy and understanding.”

This point is also debated on Reddit’s community dedicated to podcasting, where suggestions have been made that the Facebook group behind The Peripheral’s exit is called “Podcasting is Problematic.”

The Reddit post further suggests that the group’s members “have a blind hatred for any show loosely associated with Sword and Scale.”

That’s another true crime podcast whose creator Mike Boudet is reviled by online mobs who have targeted his source of income and his podcasts.

It would seem that Justin’s other show, Generation Why, “advertised for” Sword and Scale – which might have been enough to draw the ire of “hate groups” on Facebook. 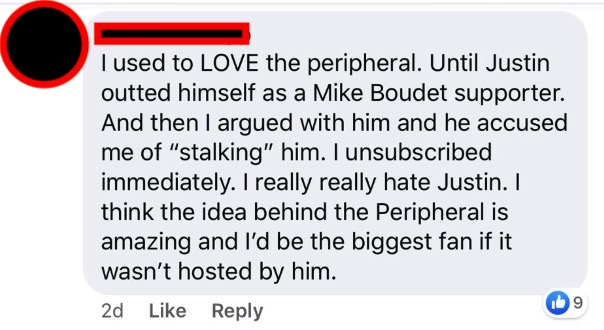 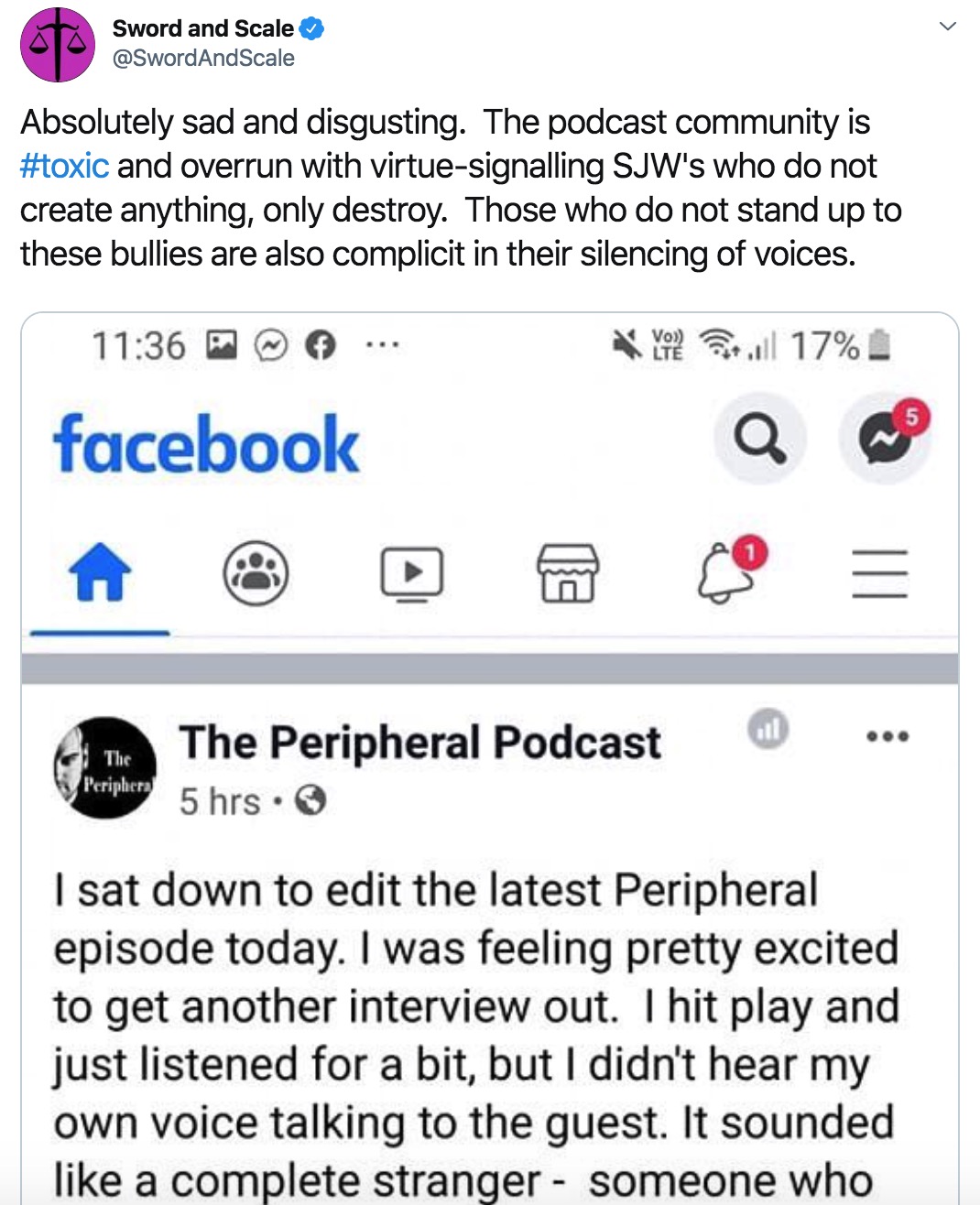