Here’s some “breaking news” (NOT): YouTube’s, Twitter’s, etc, copyright systems are broken, and disturbingly, all too often unfair and prone to rendering their users victims of manipulation. Turns out – by just about anyone, acting out against anyone they choose.

To be fair – big centralized social platforms’ systems are only broken because these companies are complacent, greedy, and lazy. They take the path of least resistance because it’s offered to them by lawmakers who came up with US copyright law’s DMCA, and resulting takedown and appeal notices process. Like in some dystopian alternate universe turning on its head how most democracies (still) operate – on a platform like YouTube, it’s the opposite: creators are all guilty by default – until possibly proven innocent.

And many diverse players have been abusing this policy for a long time now, for variously important and relevant goals. But it never gets old to shine some light on any new instance of this simply as a reminder of what this system is, and where it’s ultimately going to end up unless something changes.

With that in mind – what we have here now seems to be a “repeat offender” – seemingly the same (impostor) that in the past attempted to take down Justin Whang’s Twitter account, identified here as having the @SuperHoundSH handle (apparently, one of many) on the platform – who is now allegedly trying to extort YouTubers for Bitcoin so their videos might be restored. Accusations of a serious crime like blackmail are flying around in the comments, too.

What appears as a screenshot from a Discord exchange has been posted on Twitter to back this claim up. 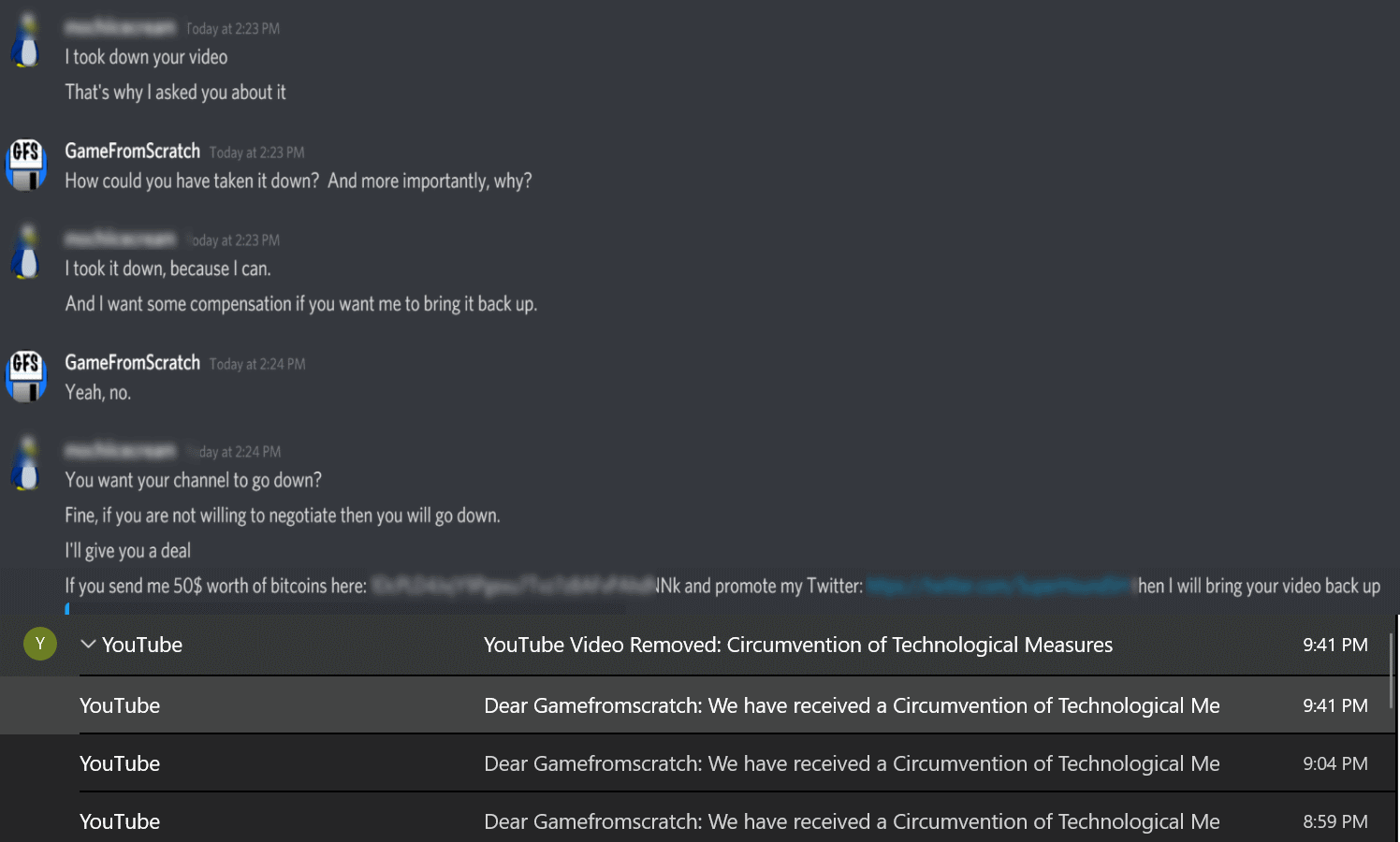 In it, a tutorial-focused YouTube channel GameFromScratch is seen attempting to communicate with a user whose name was blurred out, and who informed the popular creator that their videos had been taken down (presumably through false DMCA requests).

Why?, the victim asked.

“Because I can,” was the answer.

(Sure you “can” – because YouTube and the entire copyright system acts as your enabler-in-chief.)

And if GameFromScratch wanted their video reinstated – the issuer of the DMCA “wanted some compensation” in return.

When the target replied with what was essentially a “NOPE” to blackmail – the aggressor threatened to take the whole channel down – unless they received “$50 worth of Bitcoin.”

Considering that YouTube generally takes up to ten days to address copyright strikes and appeals, it is safe to assume that there’s a risk Memology 101 might actually be taken down indefinitely after a false strike.

Especially after YouTube’s carless negligence in responding to the issue, saying that the strike has to be resolved for the channel to be reinstated – which is impossible because it’s not a real strike.

Thanks @TeamYouTube for nothing. The party striking the videos has 10 days to answer but YouTube is only giving me 7 days to act. BIG BRAIN TIME. pic.twitter.com/WvdwzGRnyQ

The channel-owner took to Twitter and shared the ongoing issue with his fans. Here’s what he said: 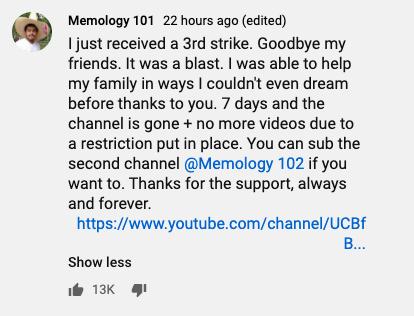 “I just received a 3rd strike. Goodbye my friends. It was a blast. I was able to help my family in ways I couldn’t even dream before thanks to you. 7 days and the channel is gone + no more videos due to a restriction put in place. You can sub the second channel @Memology 102 if you want to. Thanks for the support, always and forever.”

The channel-owner further revealed that he received the copyright strikes from an individual who was impersonating a streamer named Gross Gore.

Here @GrossieGore clarified he had nothing to do with the strike. Someone is impersonating him and I think I know who it is:
Gross is innocent. https://t.co/PBtTzDVudz

Surprisingly, SuperHound ended up claiming responsibility that he was responsible for the illegal copyright strikes. What’s more, it was also found that SuperHound has a fake website that was used to get access to people’s IP addresses.

We will now have to wait and see if YouTube will consider the false copyright allegations and save Memology 101 from being put down. That being said, on the brighter side, Memology 101 has a backup account by the name of Memology 102, which will hopefully help distraught fans stay tuned to the content regardless of the channel takedown.