Chinese propaganda mocks the US over police brutality, but in China criticism of police is censored in real-time

With the US being hit by the George Floyd protests, Chinese internet users are also seeking inspiration and are pushing back against the Chinese Communist Party for suppressing dissent. While the CCP was allegedly looking to profit from the Black Lives Matter protests by launching a propaganda war against the US, Chinese citizens’ criticism against their home government became quite a spectacle.

Recently, the Chinese Ministry of Foreign Affairs spokeswoman Hua Chunying tweeted, “I can’t breathe” – the last words uttered by George Floyd before he passed away. 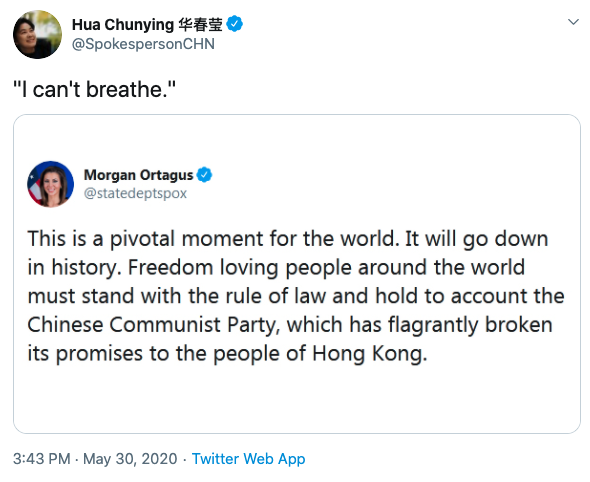 “How would those politicians or media in the US report it if this happened in China, Russia, or any other country?” Hua said at a press briefing recently.

The comments were made after state news outlet Xinhua posted a headline that read: “Heavy-handed crackdown on protests lays bare U.S. double standard on human rights.” The report said that the response to protests were an authoritarian crackdown: “Measures taken by so-called ‘foreign adversaries’ to restore order in times of tumultuous unrest are in violation of basic human rights, whereas brutally treating domestic protests – most of them peaceful – and even causing deaths are not uncommon on U.S. soil.”

Chinese internet users have, however, highlighted the fact that the residents of the US at least had the freedom to protest against the issue, whereas doing something of that sort in China would attract jail time or worse, and police brutality in China can often be secretive and worse.

After CCP ramped up its propaganda efforts against the US, several accounts of police brutality in China are also being unearthed – and, of course, censored online at every opportunity.

You may also recall back in December where we reported on police interrogating a man about his online posts. (We were hit with a cyber attack the next day.)

Based on a report by the human rights group Bitter Winter, it was revealed that a Chinese petitioner “Zhang,” who believed that his father suffered death due to torture by police, had tried fighting the death for 37 years, but to no avail.

“We won’t win. Rather, we might expose our entire family to the risk of going to jail,” said Zhang. He also said that he and his brothers witnessed their father’s death back in childhood, 37 years ago, wherein his father was clearly tortured to death by the police authorities. Chinese authorities often burn bodies, tamper evidence, and manipulate autopsy reports to ensure that the accounts of police brutality are never publicly known.

Zhang and his older brother took upon themselves to seek justice for their father’s death and kept filing petitions for 37 years. His brother, who was the active one in filing petitions, suddenly fell in the sea and drowned when he went fishing. It is worth noting that several individuals who were waging legal battles for an extended period often succumbed to such “accidents”.

After his older brother’s death, his other brother took it upon himself to continue the legal battle. This brother was then imprisoned by the local police authorities and kept in a psychiatric hospital. The doctors in the hospital stated that Zhang’s brother wanted to seek justice for their father’s death because of a paranoid mental illness, resulting in wanting an “exaggerated” compensation.

As a last resort, Zhang is now turning to the media, as such attention may help bring some progress to the 30-plus years old stagnant case. But much of China’s media being state-controlled in China (or at least heavily censored), there may not be much Zhang may achieve, as his word may not even receive the kind of outreach that can have any impact with all of the constant censorship suppressing any kind of uprising.