Fiat money is a number and an image printed on a piece of blank paper, like your dollars and your euros – whose actual value is in reality shockingly arbitrary, based on little-to-no intrinsic value outside what governments issuing it, and markets depending on and/or colluding with those governments feel like assigning to it, on any given day.

So – ever since the moment the idea of decentralized cryptocurrencies that are not owned or controlled by central banks (and state authorities, as each other&rsquor;s puppet/masters at various times) started to emerge as perhaps a viable alternative to fiat money – did anybody seriously think these powerful entities – governments, central banks – would not eventually try to do “something” about all this “nonsense”?

Well – as Bitcoin, Ethereum, Litecoin, and other cryptocurrencies emerged, they also gave rise to cryptocurrency exchanges like San Francisco-based Coinbase in some 190 countries – while this firm is also managing fiat currencies in another 30+ countries.

But now, Coinbase CEO Brian Armstrong is out there “defending” his company&rsquor;s business for none other than a contract it has with the US “Secret Service.”

In reality – this is not at all surprising – but nonetheless, it&rsquor;s so interesting.

Coinbase&rsquor;s links and activity was first exposed by US government spending database on USASpending.gov, pointing to the company winning a 4-year contract, expiring in May 2024, selling blockchain analytics software.

The buyer of this information is the US Secret Service – that&rsquor;s the actual name of a US federal law enforcement agency that is a part of the Department of Homeland Security.

Brian Armstrong doesn&rsquor;t deny there&rsquor;s a contract allowing access to the Coinbase Analytics software – instead, he sought to elucidate on what this really means. According to Armstrong, the blockchain analytics software does no more than streamline and organize what&rsquor;s already publicly available data, before selling it.

“The information offered in Coinbase Analytics has always been kept completely separate from Coinbase internal data,” the company has said. 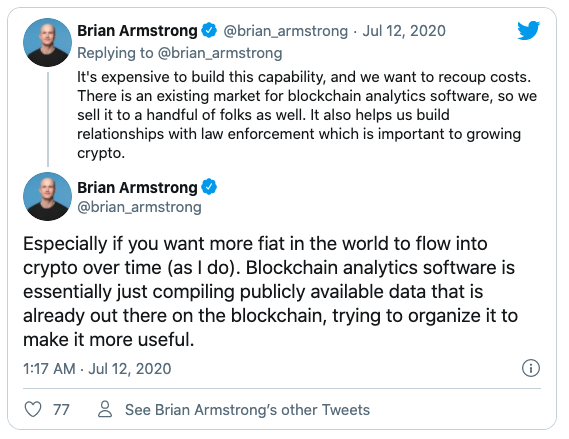 Given the sometimes exaggerated and unrealistic narrative around the cryptocurrencies and their derivative industries existing as immaculate islands in an otherwise deeply and seriously flawed fiat currency universe, it&rsquor;s no wonder that Armstrong has had to go out to explain his company&rsquor;s rationale in this “perfect” system.

“The decision to work with the Secret Service was a simple business choice aimed at recouping some of the $13.5 million Coinbase spent acquiring blockchain intelligence startup Neutrino last year,” he said on Twitter.