The world may easily need more Dick – Masterson, that is – but the comedian and catchphrase (namely, that “the world needs more Dick”) seems to have miscalculated the sustainability and longevity of his business in the face of one behemoth payment processing entity that disagrees – and it is called Mastercard.

Masterson announced that his Patreon alternative crowdsourcing project was being shuttered after 18 months due to payment processing for it now being down permanently.

NP2 processing is down permanently. Thanks for the support, everyone. After 18 months, I can confidently say that Patreon, et al, must censor to survive. We're all under the thumb of MasterCard and they're likely in your wallet. pic.twitter.com/Uxm1VDgd2U 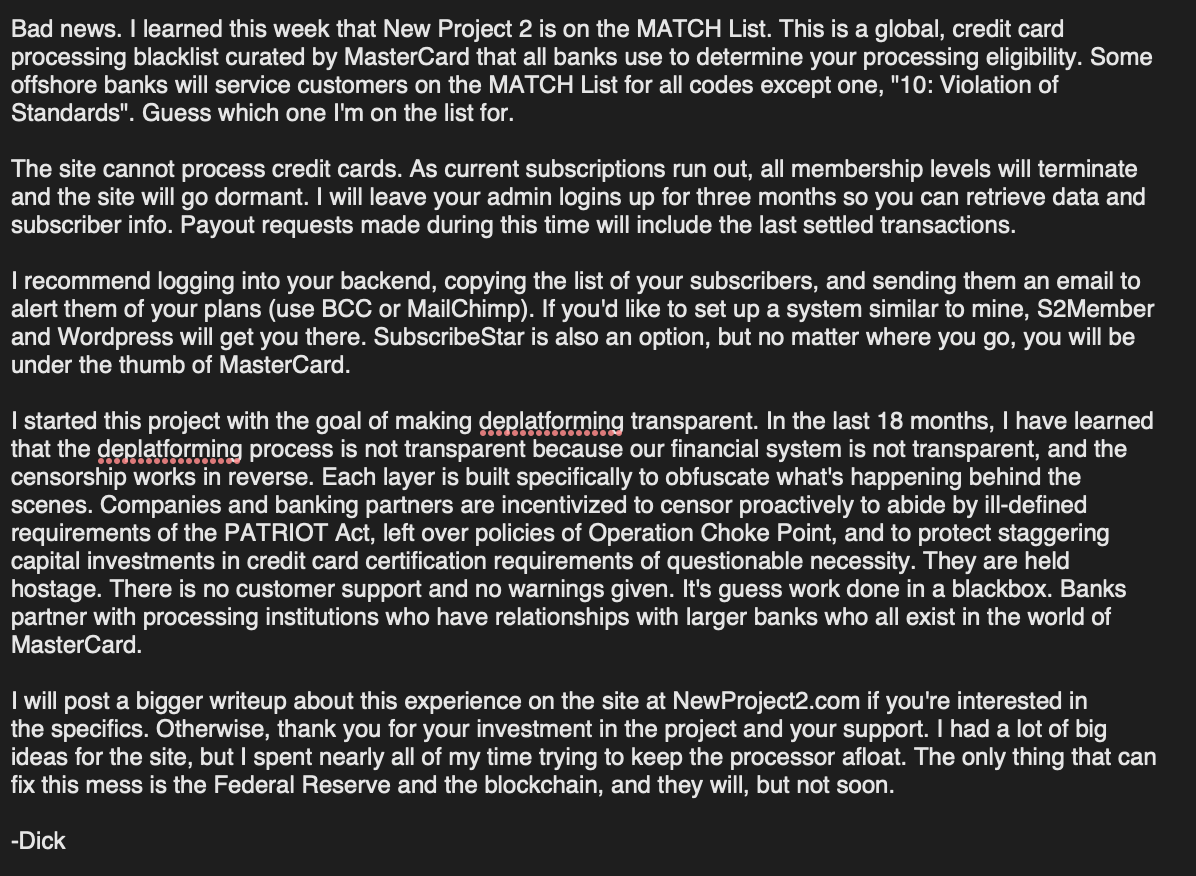 And Masterson suggested it was largely because of Mastercard’s dominance and resulting diktat of terms in the payment services business.

Dubbing it New Project 2, Masterson was looking for a way to let his audience directly support his work and the work of others, as opposed to going through Patreon – riddled with a number of controversies accusing this leader in “the “crowdsourcing industrial complex” of deploying censorship and stifling creators on a number of occasions – while at the same time establishing itself as the go-to in this particular branch of the tech and online economy.

However, Masterson’s own project did not fold because of competition – he says it was the work a global credit card processing system blacklist controlled by Mastercard – something known as the MATCH list.

And since New Project 2 as a business found itself on that blacklist, that also meant the site could no longer process credit cards, collect subscriptions, and consequently, keep this business model afloat.

Apparently, New Project 2 was hit with code 10 of MATCH – “violation of standards.” And that’s as bad as things get, he suggests – because not even offshore banks will work with businesses affected by this “rating.”

Announcing the news, Masterson said that the motive behind launching the now abandoned New Project 2 had been to provide a clear view into how digital deplatforming works. But he added that he feels he has not been successful because the very nature of deplatforming in the US depends on the financial system, which in itself is not transparent.

Describing what he refers to as “censorship working in reverse,” Masterson describes a system rigged at all levels to get rid of any “loopholes” for avoiding censorship and other stumbling blocks faced by small and medium (digital) businesses.

“Companies and banking partners are incentivized to censor proactively to abide by ill-defined requirements of the PATRIOT Act, left over policies of Operation Choke Point, and to protect staggering capital investments in credit card certification of questionable necessity,” Masterson said on Twitter, adding:

“They are held hostage. There is no customer support and no warnings given. It’s guess work done in a blackbox.”