Elizabeth Warren calls for the breakup of Amazon, Facebook, and Google

Senator and presidential hopeful Elizabeth Warren has laid out her two-step plan for breaking up Amazon, Google, and Facebook - a plan that she hopes will restore competition in the tech sector and protect consumer’s personal information.
Share 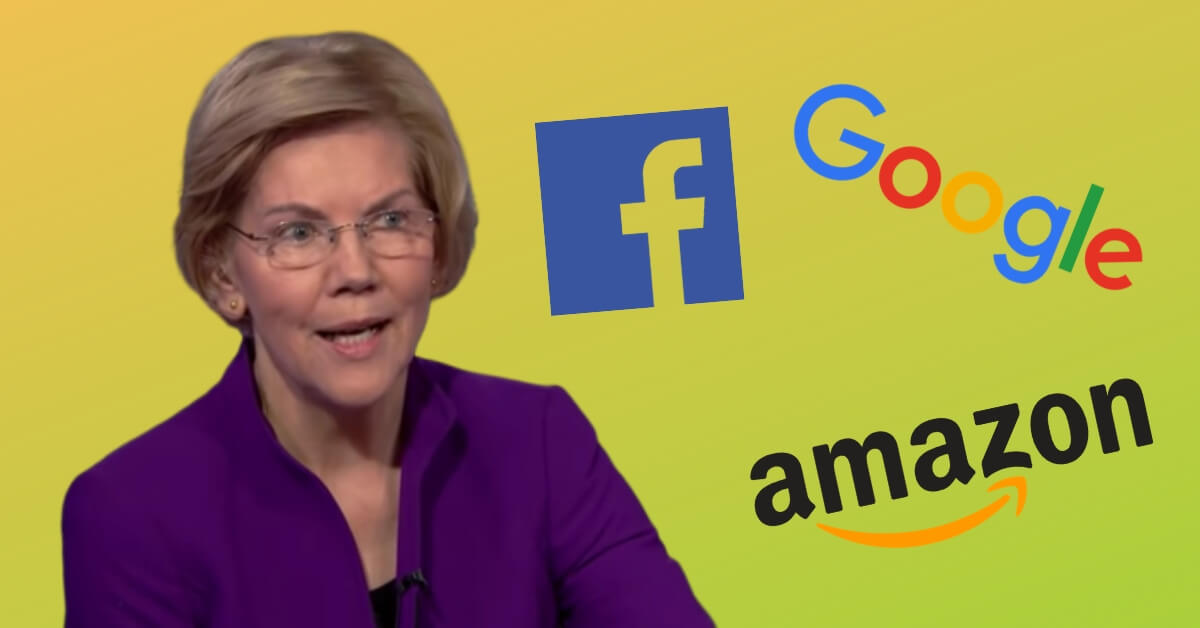 Senator and presidential hopeful Elizabeth Warren has put forward a two-part proposal to break up the big tech companies which she hopes will make the tech sector more competitive, protect the future of the internet, and give consumers more control over the data they share with big tech companies.

The first part of the proposal discusses passing legislation that will stop large tech platforms such as search engines, social networks, and online marketplaces from selling their own products and services on the platforms they own:

Companies with an annual global revenue of $25 billion or more and that offer to the public an online marketplace, an exchange, or a platform for connecting third parties would be designated as “platform utilities.”

The proposed penalties for violating this legislation are eerily similar to the penalties in the EU GDPR (European Union General Data Protection Legislation) which can fine business that violate GDPR up to 4% of their annual revenue:

To enforce these new requirements, federal regulators, State Attorneys General, or injured private parties would have the right to sue a platform utility to enjoin any conduct that violates these requirements, to disgorge any ill-gotten gains, and to be paid for losses and damages. A company found to violate these requirements would also have to pay a fine of 5 percent of annual revenue.

The second part of the proposal discusses reversing some of Amazon, Facebook, and Google’s previous mergers:

Current antitrust laws empower federal regulators to break up mergers that reduce competition. I will appoint regulators who are committed to using existing tools to unwind anti-competitive mergers, including:

While Warren’s proposals would reduce some of the existing power the big tech companies have in the market, there’s nothing in her proposals that directly supports smaller tech companies and encourages innovation.

Using a fine that’s so similar to the EU GDPR also serves as a reminder of how regulations that are designed to protect consumers from big tech companies often have unintended consequences. For example, while the GDPR has had a beneficial effect on consumer privacy in some areas, it’s also had a negative effect on the structure of the internet by requiring websites to display cookie consent notices which disrupt the consumer’s on-site experience. By forcing “platform utilities” to spin off their other products and services, Warren’s proposals may negatively impact the experience of the customers who use these “platform utilities.”

Regardless of how practical Warren’s proposals are, highlighting the power and influence these large companies have over the tech industry is beneficial. And she does raise a valid point about consumer privacy:

We must give people more control over how their personal information is collected, shared, and sold—and do it in a way that doesnʼt lock in massive competitive advantages for the companies that already have a ton of our data.

Something does need to be done about personal data and privacy. Amazon, Google, Facebook, and other big tech companies have a monopoly on user data which allows them to solidify their presence in the marketplace. However, rather than breaking up big tech, we should encourage innovation in the marketplace and support alternative tech companies that respect user privacy. This will transform the marketplace into a more competitive and healthy space which better protects consumers and their personal data.