A recent study carried out by the Media Research Center showed that since May 2018, Twitter and Facebook censored Donald Trump 65 times compared to zero such instances affecting Joe Biden, who is now the Democratic presidential candidate.

This clear trend continues mere days before the US ballot, particularly on Twitter, that has in recent months repeatedly and controversially blocked information coming from the president himself, by “fact-checking” and covering it on various occasions. 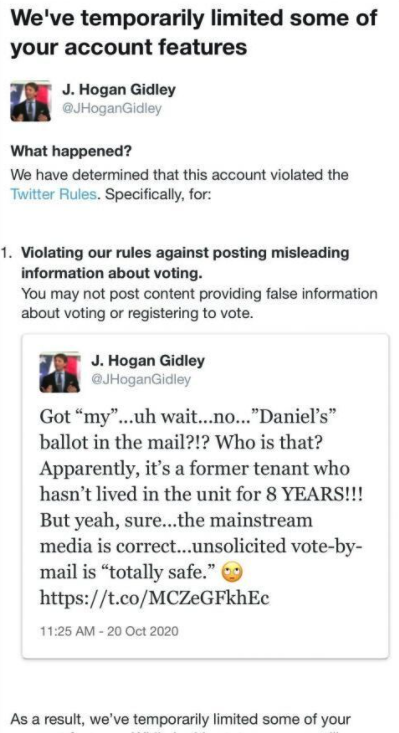 Gidley was accused and punished by Twitter for allegedly posting misleading information about voting, after he tweeted a photo of a vote-by-mail envelope he received that was sent to a person who has not lived at that address for the past eight years.

Trump has long argued that mail-in voting is a system vulnerable to various types of manipulation and errors, and represents a serious risk of election fraud. In fact, one of the president’s posts that Twitter decided to put behind a warning label has been about the practice, which Trump dubbed “a voter security disaster.”

On the other hand, his political opponents and their supporters – Democrats, affiliated media, and even tech industry figures – are strong advocates of this type of voting, declaring it safe and secure. Twitter clearly agrees and enforces this opinion as a matter of content policy, flagging and removing any dissenting posts.

In Gidley’s case, the social network blocked proof that the system can, and indeed does go wrong – like when he received “his” ballot in the mail, addressed to somebody else. Literal information was censored here as “false information.”

Gidley described Twitter’s decision to temporarily suspend his account as “irrational and inexplicable” – although, given his role in the campaign and the upcoming presidential debate, the move might have been quite rational and explicable, although hardly fair and unbiased.