Suggesting the origin of the coronavirus was China seems to be problematic for Google.
Share

YouTube is executing its newly acquired, or rather, augmented censorship powers – banking on a world ill-prepared to fight back or even question anything much as it’s thrown into a frenzy over the coronavirus pandemic. And YouTube is doing its thing with the efficiency but also the bluntness of a chainsaw.

Knowingly or unknowingly challenge the ever-changing rules (for the worse, free speech-wise), strict, coordinated with various authorities – some elected, some not: and monetization of your videos/channels might go out the window just like that.

A Chinese dissident would probably be among the last you’d expect to be shocked by YouTube’s iron-fist rule over speech on its platform – but when Jennifer Zeng was informed that it had been “determined” her YouTube channel, “Inconvenient Truths,” would no longer be eligible for monetization, the tone of her announcement on Twitter showed that she had indeed been taken aback. 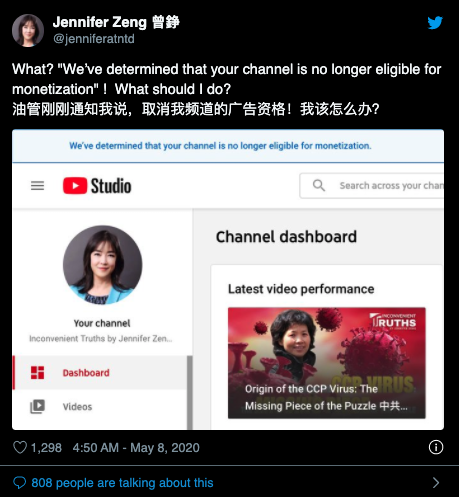 Zeng is a writer, human rights activist, free speech supporter, the author of “Witnessing history: One Woman’s Fight For Freedom and Falun Gong” and the main subject of award-winning documentary “Free China: the Courage To Believe.”

The channel that’s now stripped of the ability to earn her money has lately been dedicated almost exclusively to the role the Chinese authorities, specifically, the country’s omnipotent Communist Party (CCP), have had in the coronavirus pandemic. In fact, she refers to the virus as “CCP virus,” signaling pretty strongly where her persuasions lie regarding the roots of this global controversy.

Zeng’s experiences are first-hand. Now based in New York, Zeng grew up in China and even spent time in a CCP labor camp.

To give you an idea of the content that YouTube has now quietly sidelined by stripping it of monetization opportunities, look no further than the screenshot Zeng posted on Twitter announcing the clampdown: her latest video was entitled, “Origin of the CCP virus: The missing piece of the puzzle.”

The piece of the puzzle left to solve regarding the case of YouTube and its behavior here is: why is the giant taking issue with content critical of the CCP so meticulously, going even after relatively small creators (Zeng’s channel has just over 15K subscribers)?

Is it a case of bad algorithms or biased human raters, i.e., editors? It’s a good bet we’ll never know. In response to one of her followers on Twitter, Zeng revealed that YouTube’s old MO is firmly in place, as she tweeted, “No reason was given (for the channel demonetization decision). Just a sentence suddenly appearing on the backend of my channel.”

“A sentence,” indeed. By a “court” nobody authorized, of a “state” nobody recognizes. YouTube, that is.