Jukin Media are again accused of weaponizing other people's content for an extortion scheme that's easily made possible by YouTube's broken system.
Share

This case has so many hallmarks of what&rsquor;s going terribly wrong with the internet today, that anyone on the internet must surely pay attention.

In it, an alleged copyright troll by any other name (let&rsquor;s say – one specializing in viral-style videos) is going after a creator on YouTube on a dubious infringement claim, and outside YouTube&rsquor;s own channels; the attempt itself relies heavily on “the war on memes”; and YouTube, as the digital Wild West where nothing works as far as creators&rsquor; rights are concerned, isn&rsquor;t lifting a finger – at least not as of this time – to help the channel under attack in any way, shape, or form.

Fortunately, the victim here is not some small YouTuber that might easily fall by the wayside, as is so often the case. This one is at least big enough to gain some attention: it all revolves around a video posted by Henry Liang, aka MxR Mods on YouTube – who has over two million subscribers over there, and quite a few tens of thousands of followers on Twitter, where he also announced his trouble with Jukin Media.

“$3,000 for a single meme because it contained footage from two of their clips,” the tweet said, adding:

“If I don&rsquor;t pay this, they&rsquor;ll strike and take down my channel.”

Here are the charges Jukin media gave me. $3000 for a single meme bc it contained footage from two of their clips. If I don't pay this, they'll strike and take down my channel. pic.twitter.com/61h8FrJJxf

The tweet thread includes a screenshot of Jukin Media&rsquor;s curious, to say the least, communication with the creator. It&rsquor;s not your run-of-the-mill, or even faintly professional-sounding infringement notice. Instead, it&rsquor;s a message asking for money from the creator in return for avoiding any present, or future trouble. Straight up. 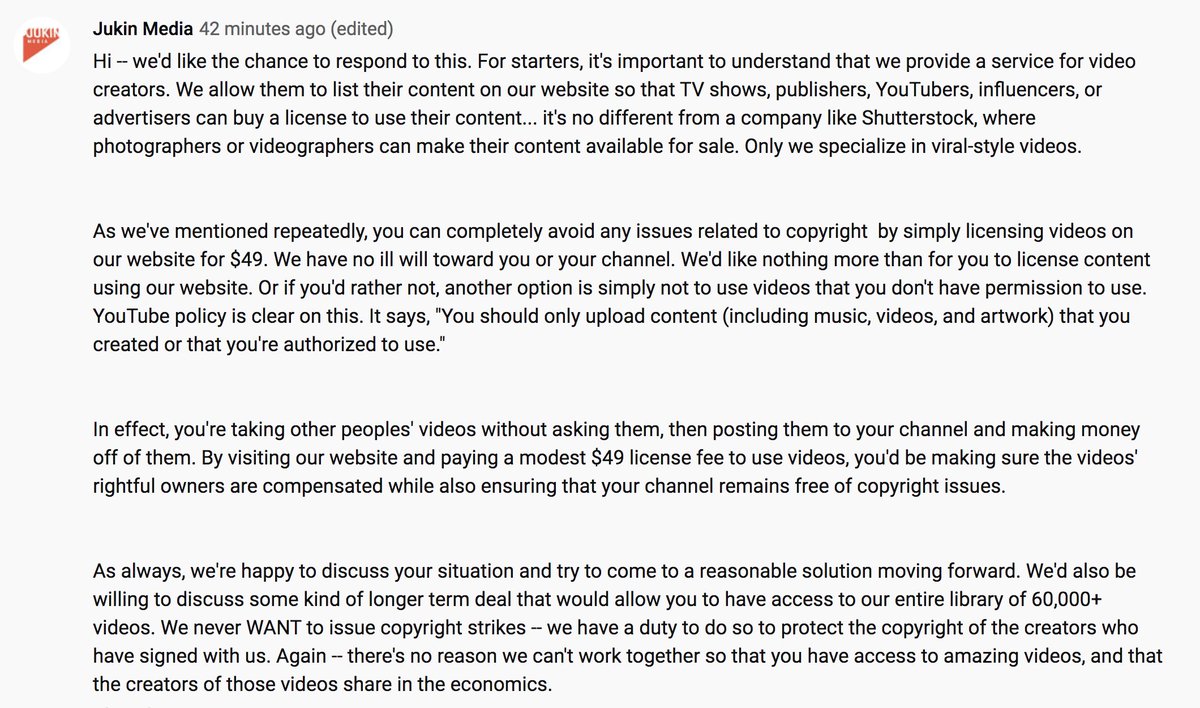 The charge here from “the rights holder,” aka Jukin, is that MxR infringed on copyright the company apparently holds in some meme the MxR channel made use of – but those memes, by all accounts, had been created by a third party. The company decided to go after a wildly popular YouTube channel – in other words, where the money is.

And it&rsquor;s also where YouTube&rsquor;s “shoot first (at creators) and ask questions later” copyright policy means a creator&rsquor;s nightmare – favoring anything from legitimate copyright claims to flat-out copyright trolls, over any interests of YouTubers themselves.

The fear of creators facing this scenario is what seems to be driving Jukin&rsquor;s message. This may, or may not, yet prove to be a double-edged sword for the company, though – as it might gain immeasurable negative exposure for going after a popular channel.

In the meantime, Jukin said it had no ill will toward MxR. And the channel could “completely avoid” any future problems simply by paying a modest “licensing fee” to the company. Further, Jukin would like “nothing more” than to see this transpire. If not, however – Jukin fell back on citing YouTube&rsquor;s notoriously flawed and harmful (to creators) copyright policy itself. TL;DR: it could get really messy for you, creator.

Jukin also says they “never WANT” to issue copyright strikes…not if they can get creators to pay up first. Otherwise – the tone of this message sent to the YouTube channel reads pretty much the way it looks to be intended: It would be a shame if something happened to it…

It&rsquor;s a sad state of affairs when a majority of the aggregate hundreds of commenters on MxR&rsquor;s Twitter are now struggling simply to determine how to qualify all of this: is it blackmail – or extortion?

But perhaps even more importantly in the long run, aside from the immorally aggressive tactic, others want to know: is this a legitimate case of copyright infringement, or an example of fair use that an unethical entity is trying to abuse?

“Fair use” means using copyrighted material in a limited way that is clearly done to produce commentary, news reporting, parody, research, or criticism. Fair use and copyright infringement, in other words, cannot coexist in the same instance.

So which one is it here? Leonard French, a lawyer who runs a copyright-focused YouTube channel, talks about “the injustice of copyright” in this lengthy stream – picking up on, and unpacking in detail, this important topic of the day over on YouTube.

YouTube channel The Quartering, also covered the story, with Jeremy saying of Jukin Media: “They are a company that ambulance chases viral videos and the promises their owners money for them.”

“The way they generate their money, from what I can tell,” Jeremy says, “Is by then taking these viral video clips…and then abusing the copyright system and issuing large amounts of claims.”

MxR are no heroes, tough: the channel just want to do their thing on YouTube without getting harassed in the process by any “parasitic copyright company.”

That worked for a while, as MxR agreed to go along with Jukin Media in some past instances, just to make the dreaded “strikes” go away. But now, Jukin is asking for $1,500 per clip they claim as owning/representing, per creator video – and now going straight for the “strikes jugular.”

Memology 101, though, has its verdict, and it&rsquor;s a harsh one: “(MxR) caved in the past. Therefore, Jukin Media has taken this as a chance to rob them completely.”