Evidence disputing the accusations doesn't appear to be considered in the section of the documents describing how to determine whether an alleged crime is "credible."
Share

Leaked documents provided by former Facebook content moderator Ryan Hartwig appear to outline a one-sided internal process that&rsquor;s used by Facebook and its content moderators to assess the credibility of accusations of “recognized crime” on its platforms. 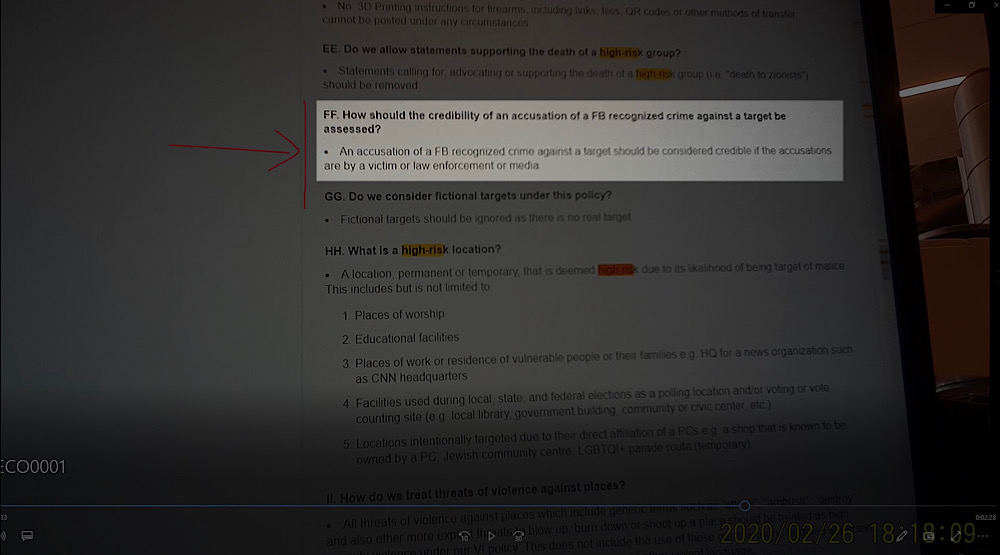 The timestamp on the photo of the documents shows that it was taken on February 26, 2020 so some of the details of Facebook&rsquor;s policies may have been updated since.

According to Hartwig, these documents pertain to Facebook&rsquor;s controversial “Dangerous Individuals and Organizations” policy and he claims that this is the policy Facebook used to brand the shooting in Kenosha, Wisconsin a “mass murder.” The shooting resulted in the death of two individuals and another person being heavily wounded.

17-year old teen Kyle Rittenhouse has been charged with murder after shooting at men who were pursuing him in Kenosha, Wisconsin but the case has yet to go to trial and one of Rittenhouse&rsquor;s attorneys, John Pierce, has described his actions as “100% self-defense.”

According to Facebook&rsquor;s public-facing definition of mass murder in its Dangerous Individuals and Organizations policy, a homicide is considered mass murder “if it results in three or more deaths in one incident.”

Based on this definition, the Kenosha shooting fails to meet Facebook&rsquor;s public criteria for a mass murder but it has been given this designation regardless.

Not only is Facebook&rsquor;s public definition of a mass murder inconsistent with the Kenosha shooting but the burden for an accusation of recognized crime to be considered credible, according to the documents provided by Hartwig, is much lower than the burden required by criminal courts or even the court of public opinion.

In criminal court, the prosecution and defense present their evidence to a jury and an incident is only recognized as a crime if jurors agree that a crime has been perpetrated.

Even in the court of public opinion, which is often heavily criticized for rushing to conclusions without considering all the available evidence, the accused is usually given the opportunity to put out a statement to defend themselves.

But according to these documents, accusations from a victim, law enforcement, or media are the only things that are considered when Facebook and its moderators decide whether accusations of crime are deemed to be credible.

There&rsquor;s no mention of considering evidence or testimony that challenges these accusations or defends the accused in the section of the documents that covers how to establish the “credibility of an accusation of a FB recognized crime against a target.”

After Facebook designated the Kenosha shooting a mass murder, Rittenhouse&rsquor;s Facebook and Instagram profiles were suspended and all search results for his name were blocked which prevented all posts, photos, videos, and news articles related to Rittenhouse from appearing in these results.

Facebook has also announced that any praise or support for Rittenhouse or the Kenosha shooting will be purged from its platforms meaning that simply stating Rittenhouse&rsquor;s official legal defense – that he acted in self-defense – is now forbidden on Facebook.

Facebook is one of several online platforms that has been digitally erasing support for Rittenhouse since the Kenosha shooting.

Twitter has locked the accounts of multiple Rittenhouse supporters, including his defense lawyer Lin Wood, and crowdfunding website GoFundMe deleted his campaign to raise funds for his legal self-defense case.