Airline’s advert tells Scandinavians they have no culture, blames “online attack” after getting downvoted

Viewers slammed the advert’s assertion that “absolutely nothing” is truly Scandinavian.
Share

Scandinavian airline SAS is getting ratioed on YouTube after asserting that nothing is truly Scandinavian in its latest campaign.

The video opens with the narrator asking “what is truly Scandinavian?” and then answering her own question with “absolutely nothing.”

The rest of the video then goes on to claim that the iconic Scandinavian windmills, Swedish meatballs, and many other things typically associated with Scandinavian culture are “copied” from other countries.

Many viewers have slammed the advert and see it as an attack on the company’s Scandinavian customers.

Can somebody please fire the entire board of #SAS to save the company from itself? Have you ever seen a company before with such a lack of soul or integrity, arranging advertising campaigns where they spit their own customers in their faces? Idiots, morons, the whole lot. Fire!

SAS disabled comments on the YouTube video but the overwhelming pushback against the advert can be seen in its dislike/like ratio with the video accruing 43,000 dislikes and just 1,800 likes within a day of being uploaded.

As criticism of the advert started to go mainstream, SAS temporarily hid the YouTube video, claimed that “the campaign has been hijacked,” and blamed the backlash on an “online attack.” 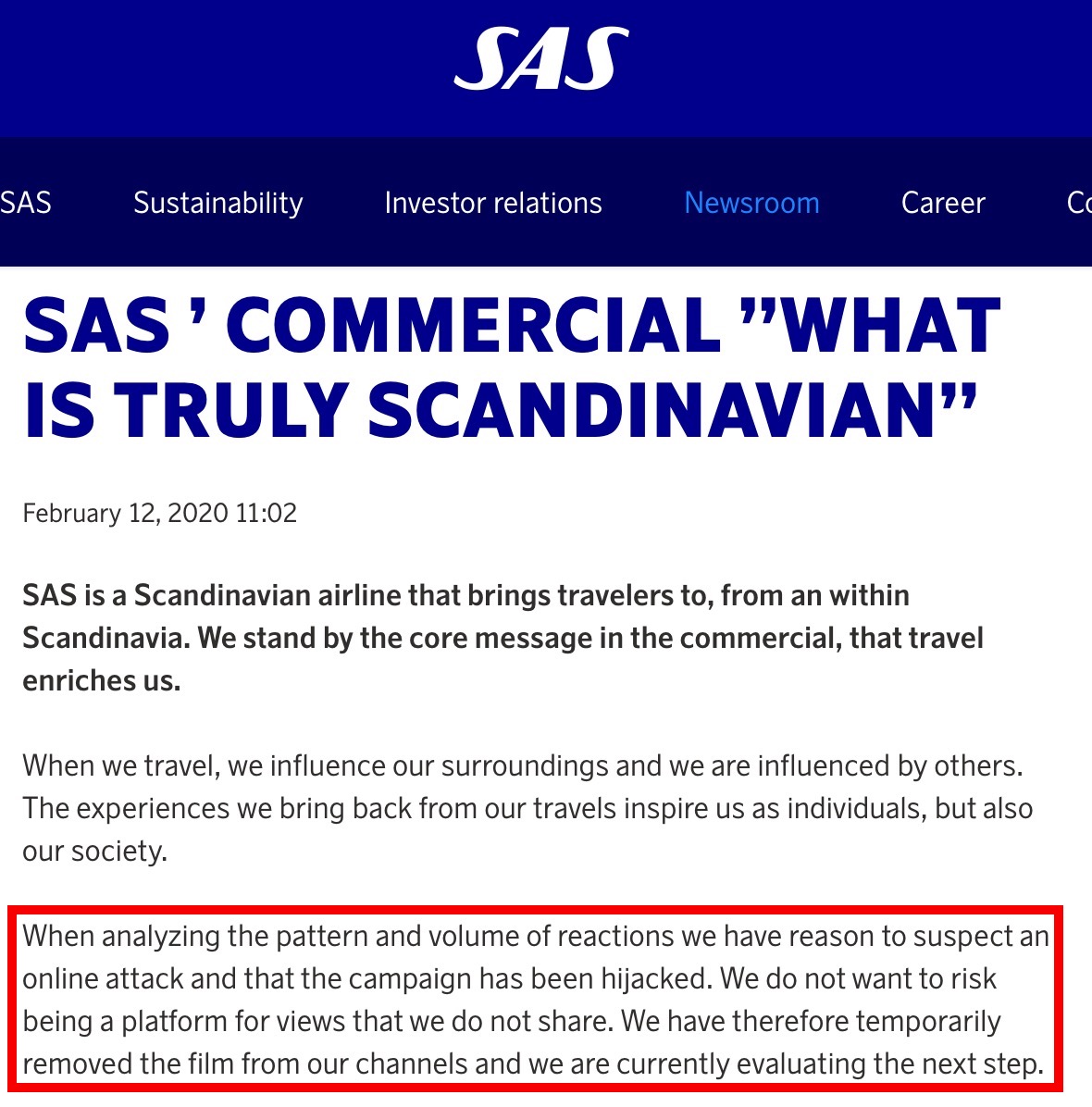 SAS responds by claiming the mass criticism is a targeted attack? And that they don’t want to be a platform for hate? I’m sorry, what? Like claiming that scandinavian culture doesn’t exist is hateful towards all Scandinavians and our ancestors before us? pic.twitter.com/hVcm3MXqCL

SAS then made the original YouTube video public again and released a “shorter and clearer version” of the video while continuing to insist that criticism of the video was an “attack.”

Like with the original video, this shorter version has its comments disabled and is getting ratioed on YouTube with the video currently having over 6,600 dislikes and just 289 likes.

This Gillette advert was blasted for attacking men, has accrued 1.5 million dislikes, and is currently the 29th most disliked video on YouTube ever.