It’s slowly becoming clear that US state governors were contacted by the social media giant Facebook over “Reopen America” events, not the other way around.

While CNN reporters initially tweeted that the governors were the ones to ask Facebook to ban the event pages of “Reopen America”, it’s now looking more likely that Facebook actively pursued guidance from state governors in a move to shut down groups that were organizing protests themselves. 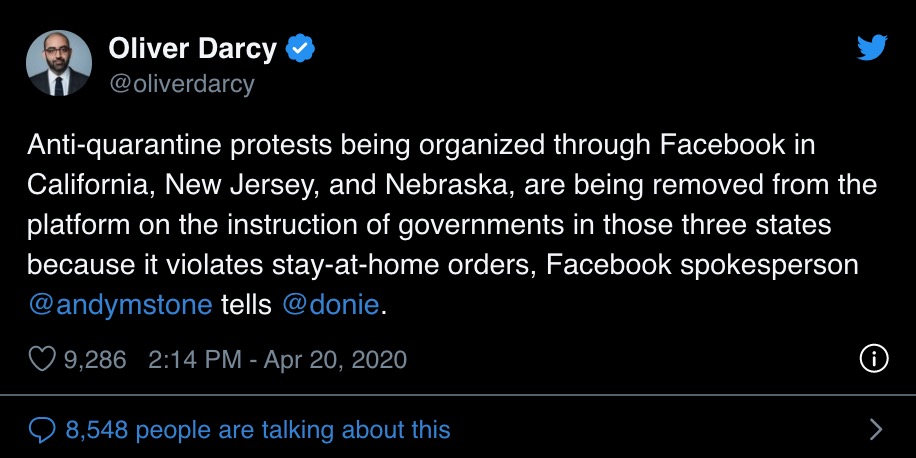 But that appears to not have been true. (surprise, surprise, CNN)

What’s more, another CNN reporter also ended up sharing a tweet along the same lines of Facebook shutting down pages due to government orders.

While CNN, as well as other newshouses such as Politico, reported that Facebook shut down the protests based on the government’s orders, the governor’s office of Nebraska has made it crystal clear that it had no involvement whatsoever and that it was Facebook’s own decision to delete the groups from the platform.

“The Governor’s Office is not aware of any Facebook events regarding COVID-19 protests, and has not requested Facebook to pull any events down. Facebook reached out last week to learn more about Nebraska’s social distancing restrictions, and the Governor’s staff provided already publicly available information about Nebraska’s ten-person limit and Directed Health Measures,” said the Nebraska governor’s office, when Reclaim The Net asked them what was going on.

Furthermore, even New Jersey’s governor denied their involvement in the decision to shut down pages and said, “The governor’s office did not ask Facebook to remove pages or posts for events promoting lifting the provisions of the governor’s stay-at-home order”.

Facebook CEO Zuckerberg has himself now changed course and said that the event groups were actually banned for spreading “harmful misinformation”.

“We do classify that as harmful misinformation and we take that down,” Zuckerberg said. “At the same time, it’s important that people can debate policies, so there’s a line on this, you know, more than normal political discourse. I think a lot of the stuff that people are saying that is false around a health emergency like this can be classified as harmful misinformation.”

Nonetheless, when we pressed Facebook, they said that it may revisit its decision on the matter and reverse any page takedowns as governments haven’t actually prohibited any such events.