Crowder is fighting back against YouTube's constant censorship of his channel.
Share 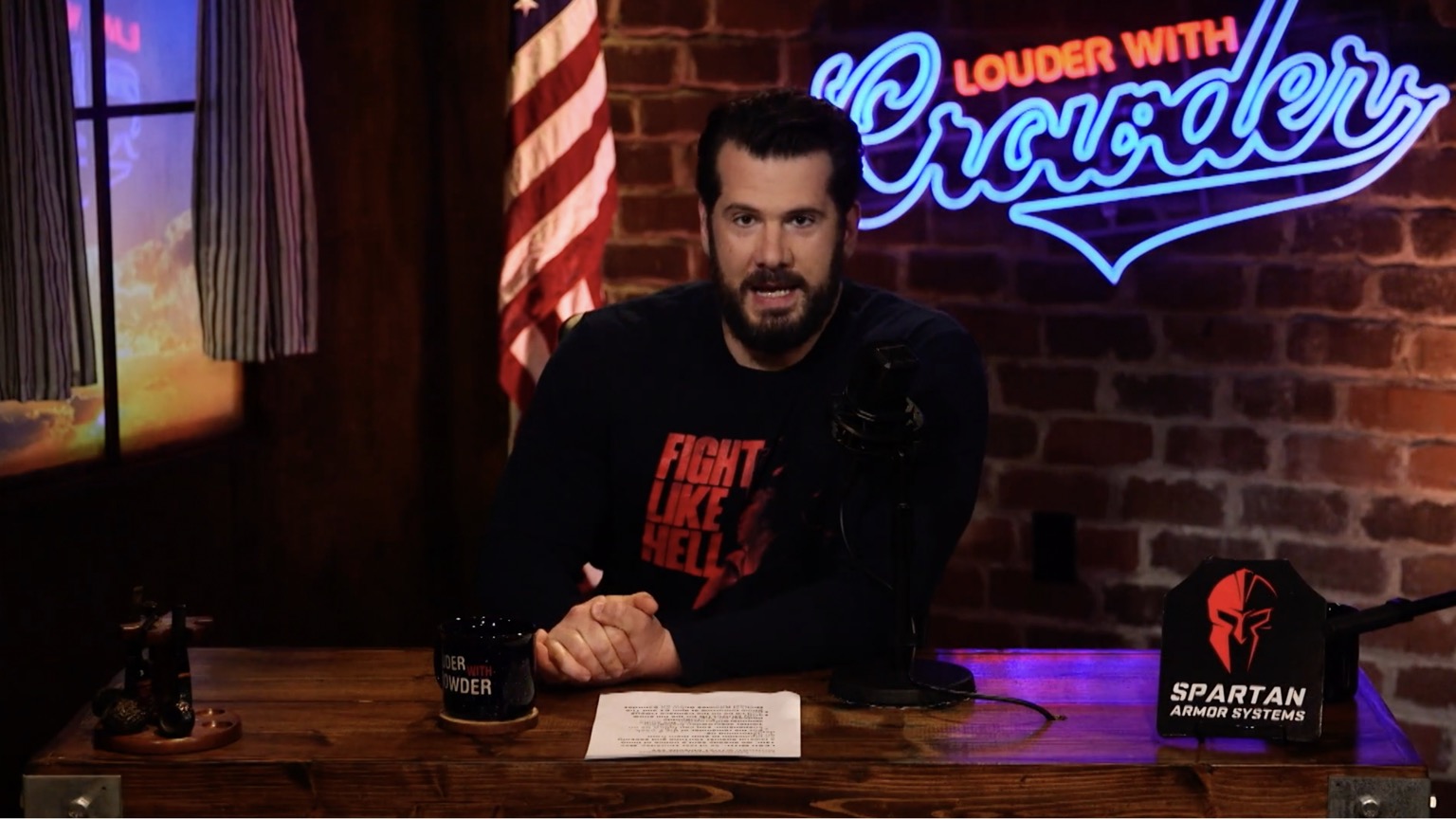 Comedian Steven Crowder has announced that last Thursday (May 14, 2021), his company, Louder with Crowder LLC, gave a legal notice to YouTube announcing its intent to file a lawsuit and seek an injunction to stop YouTube deplatforming his channel.

Crowder has one of the most popular conservative channels on YouTube with more than five million subscribers. However, over the last few months, YouTube has removed his videos, demonetized his channel, and most recently, suspended him from uploading or live streaming for two weeks.

“Once we hit the new year and a new president ascended, the landscape of social media shifted in favor of the left,” Louder with Crowder’s editor at large, Courtney Kirchoff, noted in a blog post announcing the legal action against YouTube. “Democrats took control of the presidency and now have control of both houses of Congress. As such, YouTube and other Big Tech platforms feel emboldened, with very few lawmakers standing in their way.”

In a video about the legal action they plan to take against YouTube, Crowder and his lawyer Bill Richmond discussed how the channel is now just one strike away from being deleted after receiving a warning strike and two hard strikes this year.

The warning strike was issued on a coronavirus lockdown anniversary video where someone in the studio said “young children are more likely to die of the flu than COVID.” 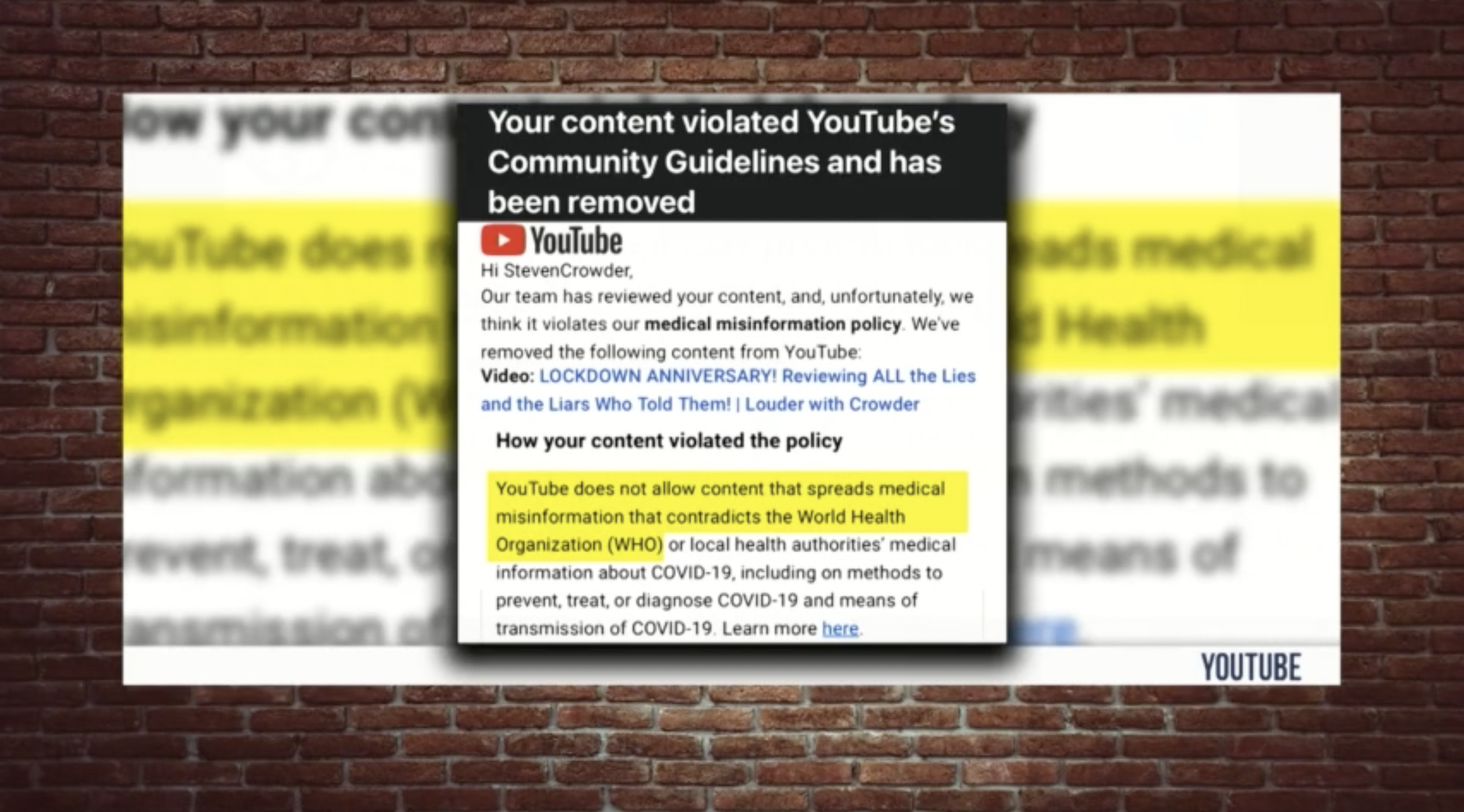 The statement reflects Centers for Disease Control and Prevention (CDC) statistics but YouTube deemed the video to be in violation of its “medical misinformation” policy.

“It is tantamount to saying that no conservatives or people who cite the CDC and believe that relevant information like young children have a different immune response to COVID than the standard flu, and it is significantly less lethal to young people but more lethal to old people, which we&rsquor;ve always talked about, YouTube is saying anyone with that point of view is not welcome on this channel, on this platform, I guess,” Crowder said when discussing this warning strike.

The first hard strike was issued on a March 29 video where Crowder provided examples of a vote being cast from a fake address in Nevada in 2020. YouTube deemed this to be “content that advances false claims that widespread fraud, errors, or glitches changed the outcome of the 2020 U.S. presidential election.” 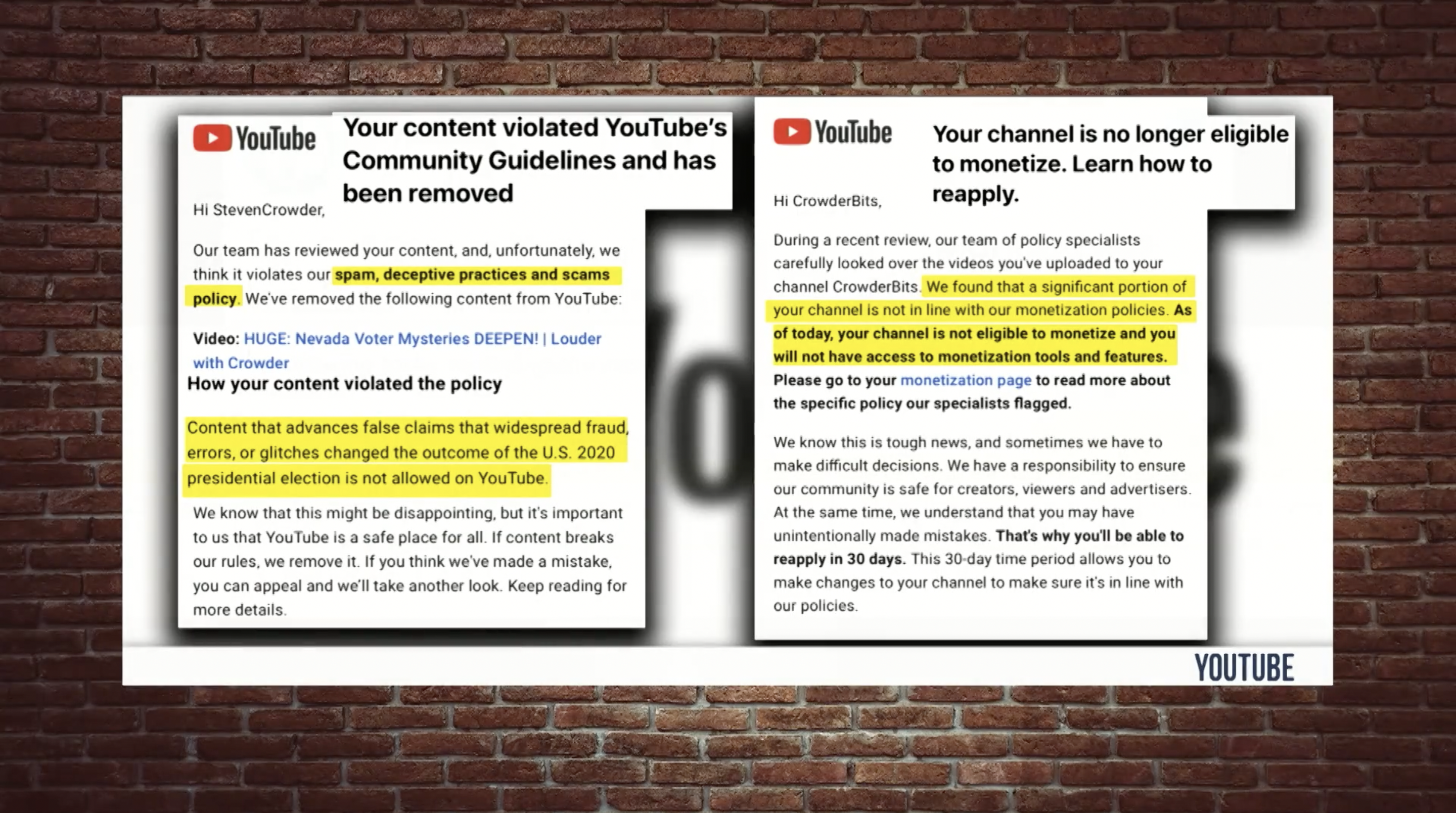 Crowder said he didn&rsquor;t make any such claims and described this first strike as “investigative journalism being a violation of the policy if someone doesn&rsquor;t like it.”

The second hard strike was issued on a May 10 video where Crowder described the Columbus police shooting of Ma&rsquor;Khia Bryant as “an example of a justified police shooting” that was “necessary to save the life of someone who is in the process of being stabbed.”

According to YouTube, this video violated its rules around “content reveling in or mocking the death or serious injury of an identifiable individual.” 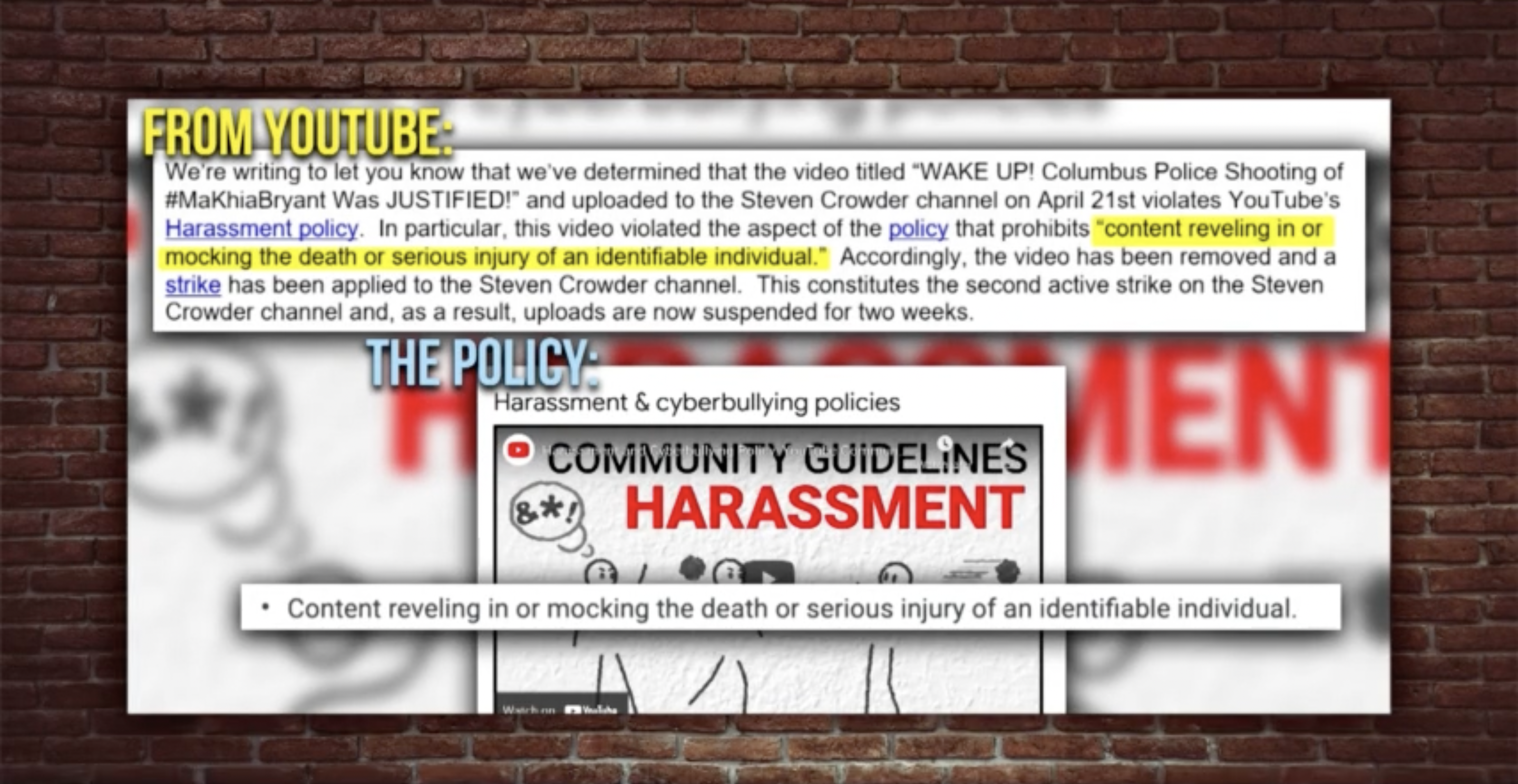 Crowder noted that Big Tech platforms allowed posts that were favorable to Bryant and critical of the police officer to remain up. But when he challenged the criticism of the police officer and argued that the shooting was justified because she had a knife in her hand and was about to swing at another girl, his video was removed and he was suspended.

“That means that the lie is allowed and the truth is not because the truth is simply from a point of view which is impermissible,” Crowder said.

“It&rsquor;s an incredible indictment of how YouTube enforces its policies and, and really the reason why we&rsquor;ve had to give the notice, serve the notice of moving for an injunction, to prevent the deplatforming,” Richmond added.

Richmond continued by discussing how he and Crowder&rsquor;s team are concerned about YouTube actively looking for violations that aren&rsquor;t actually violations and explained that this is why they&rsquor;ve moved forward with this injunctive notice which will request immediate relief to protect the existence of Crowder&rsquor;s YouTube channel.

“This is something that concerns every person who values any type of democracy,” Richmond added. “What they&rsquor;re saying is ‘these ideas are so dangerous that we can&rsquor;t address them and rebut them, we can&rsquor;t criticize them, we just have to extinguish the opinions entirely, we have to eradicate these opinions from the planet because we can&rsquor;t deal with them.&rsquor; But the reality when everyone looks at this is, this is a comedy show that takes on important issues. Commentary, politics, issues that are facing everyone in every part of the nation in the world. And we have to be able to talk about them.”