The Ellen Show is using copyright claims to silence criticism

The Ellen Show is weaponizing the DMCA as a censorship tool.
Share

If you have an interest in the internet’s media scene, you’ll know it might at this point really seem to be all about campaign/media narratives in a vicious cycle – i.e., a seemingly infinite political/rhetorical regress following an ideological direction – but when all’s said and done, to no useful place.

Be that as it may – the troubles currently faced by prominent liberal talk show host, Ellen DeGeneres is a narrative that follows through to where so many stories end these days: in censorship.

This made some people upset as they argued that being friends with Bush was support for “tolerance of hate and discrimination”.

So far so good – DeGeneres took a stance, it was reported about. She defended herself – saying that people should learn to be friends with and accept those with a differing opinion to their own in order to open debate and increase tolerance.

But is seems that this “peacemaker” was not so benevolently inclined towards anyone asking any further questions about her true motivations. And she then went after some of the internet’s most basic rules that are there to protect the right to question positions espoused by public figures and to exercise free speech.

DeGeneres’ show, in fact, decided to go for the “copyright claim” as a means to silence those questioning what the alleged was really a case of the star’s burgeoning hypocrisy. 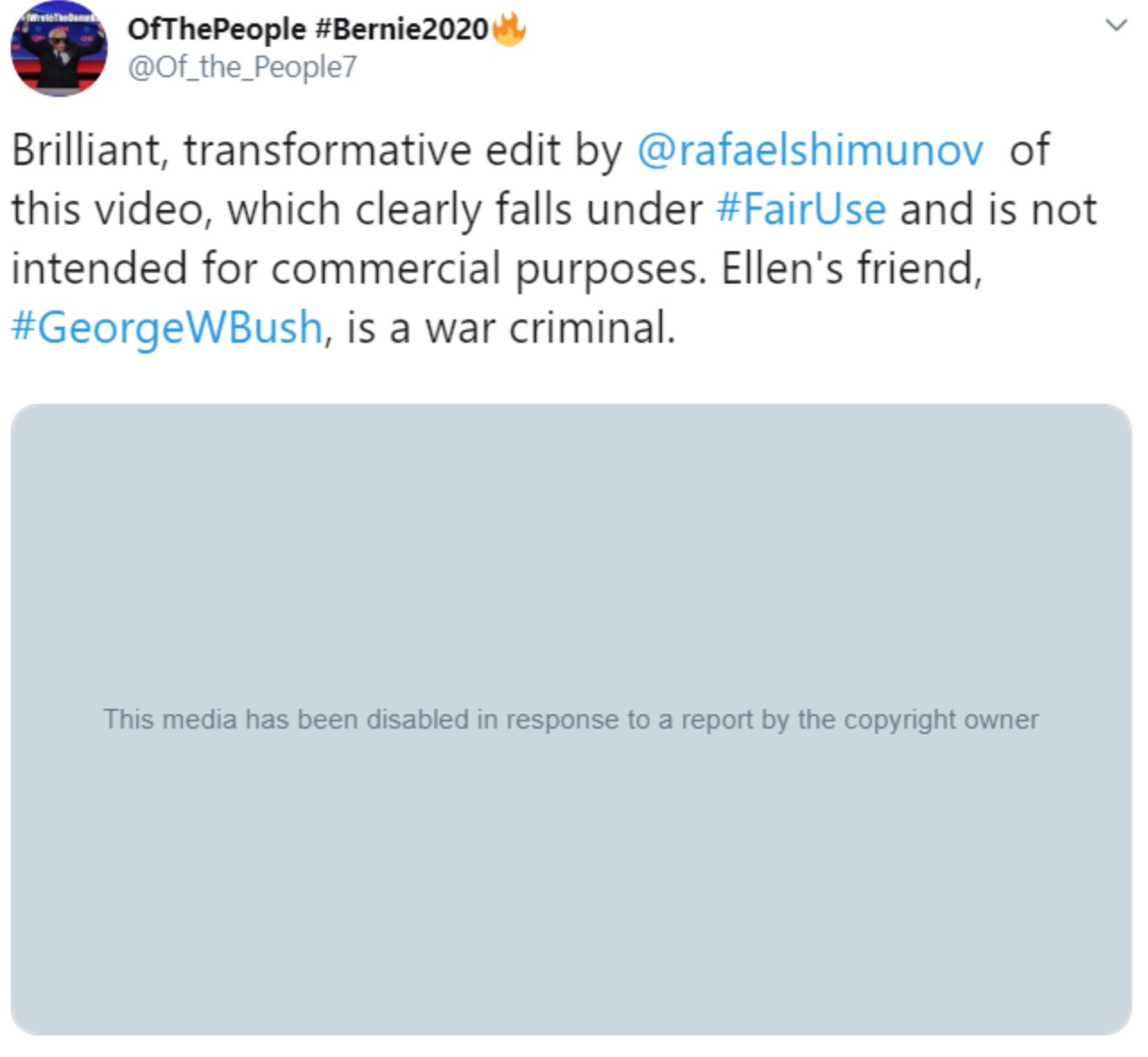 The video that pushed the buttons of the internet was a transformative one, created by Rafael Shimunov – that took Ellen’s “be nice to each other” monologue about the situation and added images on the back display with scenes of devastation in the Middle East – those that are often attributed to President Bush’s policies.

Regardless of the argument or even whether The Ellen Show likes it or not, this kind of use of original material is protected online as fair use.

@TwitterSupport just notified me that they have removed this video. In the screenshots I am posting is an e-mail address for @TheEllenShow and I say Twitter do your thing and ask Ellen why she keeps reporting this content that is definitely #FairUse. @rafaelshimunov https://t.co/6vziaTGvSi pic.twitter.com/tubd5ReBlC

But there’s been something of the “Streisand effect” developing here, too. This, of course, refers to somebody attempting to stifle the spread of information they see as unfavorable – only to witness it gaining more audience thanks to the censorship effort than it would have ever have done originally.

It’s not yet known where the ill-thought-out copyright takedown claims may have come from – perhaps the Ellen Show’s “social media manager.”

Even if that’s true, – the case still reveals the censoring powers of modern copyright law and the controversial DMCA that causes content to get deleted upon only a mere accusation of wrongdoing. Combine this with a well-timed claim during a heated political debate and it’s easy to see that The Ellen Show is weaponizing the DMCA as a censorship tool.