After its own censorship spree, Twitter complains it’s getting censored in Uganda

Over the last week, Twitter has engaged in one of its largest-ever US censorship campaigns. Between Friday and Monday, it suspended a staggering 70,000 accounts with that number including the high profile suspension of the President of the United States.

But while Twitter’s sweeping US censorship campaign was garnering most of the attention in US media, another political censorship story was brewing.

Both of these Silicon Valley companies decided to take action against these accounts days before the 2021 Ugandan general election which takes place on January 14.

Unlike in the US, Uganda’s government pushed back hard against the Silicon Valley giants’ removal of these accounts.

It accused the US tech giants of meddling in the Ugandan election and then shut down social media and messaging apps in the country two days before the election.

“If you want to take sides against the NRM, then that group should not operate in Uganda,” Ugandan President Yoweri Museveni said. “We cannot tolerate this arrogance of anybody coming to decide for us who is good and who is bad.”

President Museveni is a known supporter of social media censorship and has blocked both Facebook and Twitter on election day during the last election in 2016.

However, Twitter has decided to complain about the situation and warn about the harms of this online censorship in Uganda, without any reflection on the impact of Twitter’s mass censorship of political conversations and figures in the US.

“Ahead of the Ugandan election, we’re hearing reports that Internet service providers are being ordered to block social media and messaging apps,” Twitter’s Public Policy account wrote. “We strongly condemn internet shutdowns – they are hugely harmful, violate basic human rights and the principles of the # OpenInternet.” 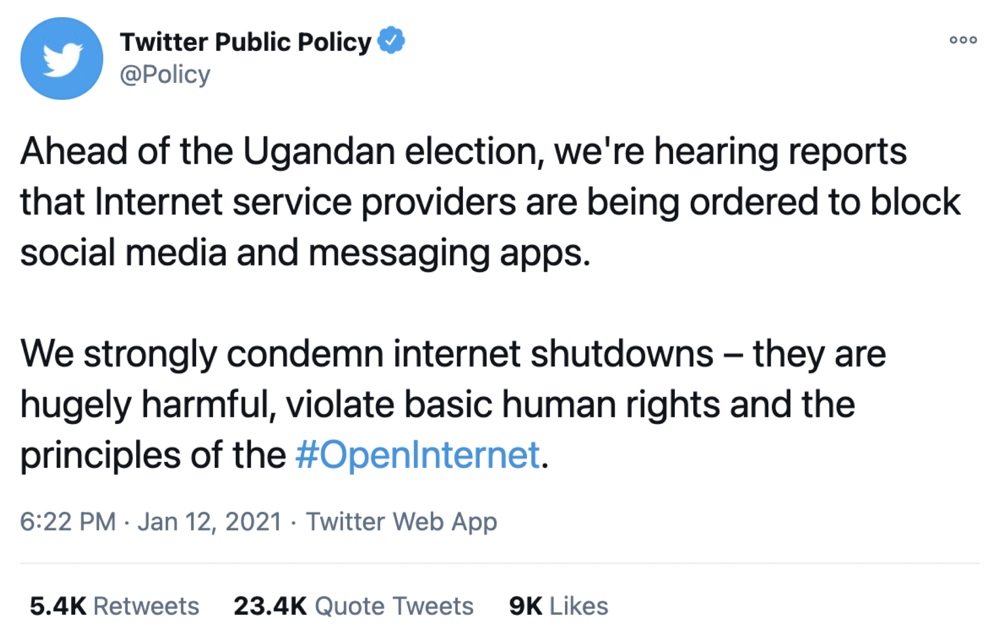 In a follow-up tweet, the company added: “Access to information and freedom of expression, including the public conversation on Twitter, is never more important than during democratic processes, particularly elections.” 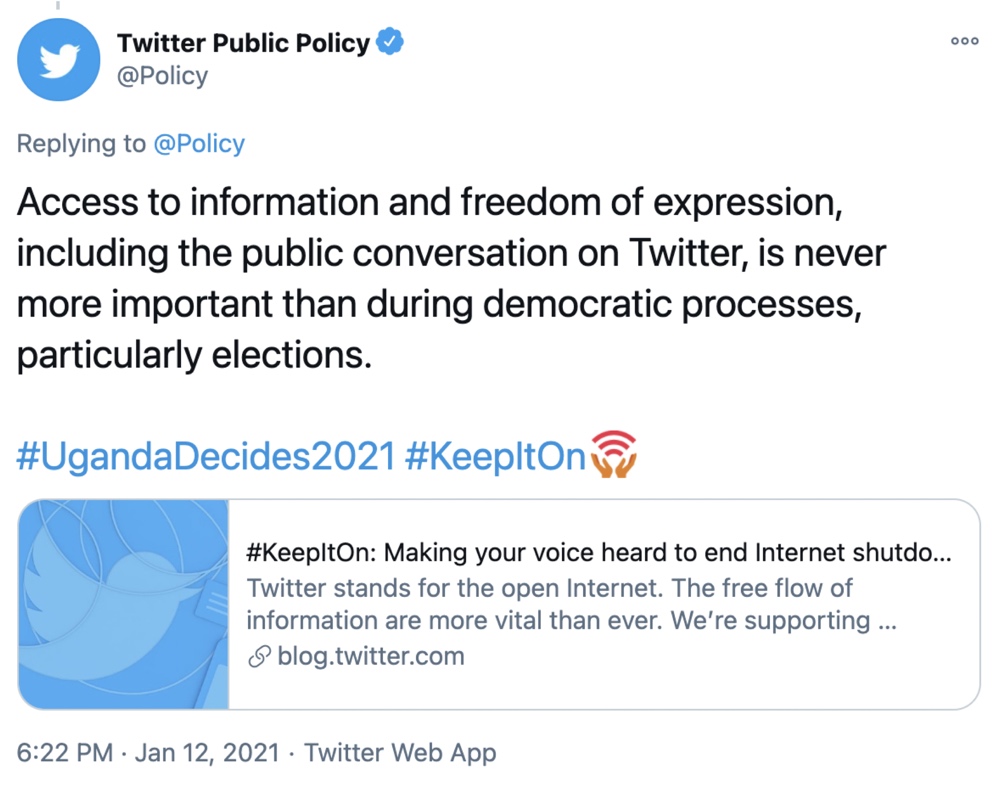 This statement is coming from the same company that heavily censored tweets about the 2020 US presidential election and from President Trump in the months leading up to the election.

Trump was censored hundreds of times, numerous memes about his opponent Joe Biden were removed, and countless tweets about mail-in voting were suppressed.

Then in October, less than three weeks before the election, Twitter censored a bombshell story from the New York Post about Joe Biden and his son Hunter Biden’s alleged corruption scandal.

If access to information is really so important to Twitter during democratic processes and elections, why did it suppress hundreds of messages from the President, hide criticism of his opponent, and block a major election-related news story from one of the country’s largest media outlets in the months leading up to the 2020 US presidential election?

If freedom of expression is so important to Twitter during democratic processes and election, why did it consistently hide, label, and editorialize those who were sharing their opinion on mail-in voting in the run up to the 2020 US presidential election?