Turning Point USA founder Charlie Kirk has been locked out of his Twitter account for tweeting out the details of a story about voter fraud in Pennsylvania and asking the question “what’s going on?”

“Pennsylvania just rejected 372,000 mail-in ballots One voter was said to have submitted 11 duplicate ballots Pennsylvania might be the key to winning the White House What’s going on?” 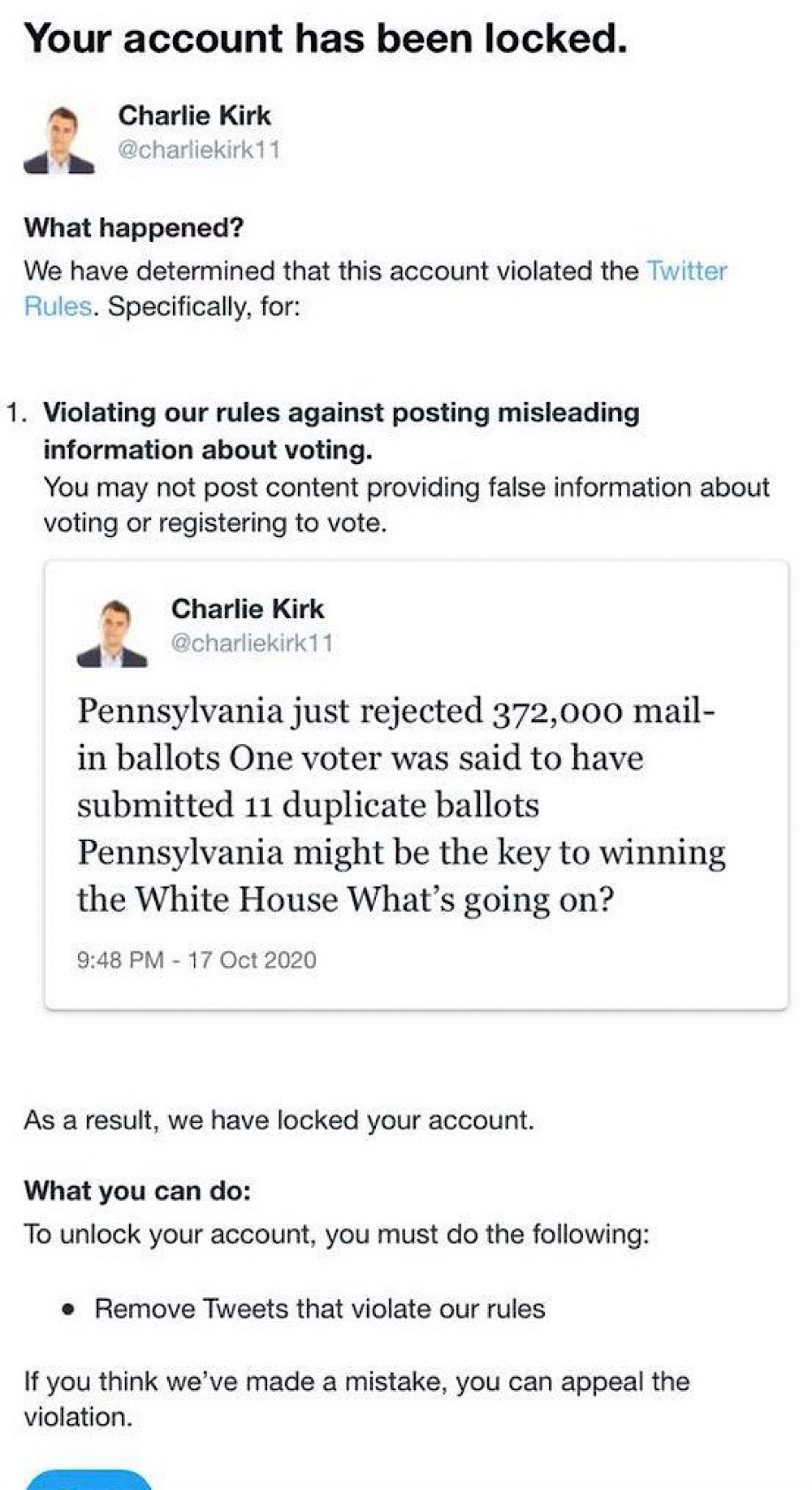 The first two points in Kirk’s tweet about 372,000 rejected mail-in ballot requests and one voter submitting 11 duplicate ballot applications are details from a story that has been reported in local and national media.

Kirk’s question must have violated Twitter’s rules on posting “misleading” information about voting and the election by referring to ballot request applications as “ballots.”

Kirk’s third point about Pennsylvania being key to winning the White House is also strongly supported by statistics with Donald Trump securing a narrow win in the battleground state of Pennsylvania in 2016 but Democrats winning the state in the six elections before 2016.

And Kirk’s final point is simply a question that makes no assertion or judgment.

But according to Twitter, Kirk’s statement violated the rules against “posting misleading information about voting.”

The locking of Kirk’s account represents yet another escalation from Twitter when it comes to censoring tweets that discuss mail-in voter fraud.

Twitter recently locked the account of Richard Grenell, the former acting Director of National Intelligence, after he shared a photo of ballots that had been mailed to people who have been dead for more than 10 years

President Trump also had one of his tweets labeled for making a “potentially misleading” statement about mail-in voting. Twitter editorialized the tweet with a message stating: “Learn how voting by mail is safe and secure.”

In addition to censoring statements about voter fraud, Twitter has also been accused of selectively applying fact-checks on tweets about mail-in voting. Debunked statements and photos claiming that the United States Postal Services (USPS) is trying to sabotage vote by mail often go unchecked while tweets discussing voter fraud are routinely censored.

Voter fraud is mostly discussed and highlighted by Republicans meaning that the censorship and selective fact-checking often affects conservatives.

But voter fraud isn’t the only election-related topic that’s being censored by Twitter. Negative tweets and stories about the Democratic presidential candidate Joe Biden have been heavily censored on the platform in recent months.

Earlier this week, the platform aggressively censored a viral story about Biden that alleged he and his son Hunter Biden had engaged in a corruption scandal.

Twitter has also been locking the accounts of users that question Biden’s health and forcing users to remove an infamous compilation video showing Joe Biden with young girls.

And Twitter is even making it difficult for users to share certain election-related stories by directing them to “credible” information whenever they attempt to retweet something Twitter has branded disputed or misleading.