Twitter sued for not removing images of child sex abuse

Twitter is known for acting fast to delete people’s speech on the platform – but there’s allegedly something Twitter appears to be more reluctant to take down; even when asked multiple times, and even when that content is illegal.

A minor has filed a lawsuit against Twitter for refusing to remove sexually explicit videos of him, which was posted when he was aged 13. At the time, Twitter claimed the videos, posted by sexual predators, did not violate community standards.

The lawsuit claims that Twitter failed to remove the videos at the request of both the minor and their parent. The social media company responded to their requests by saying, “We’ve reviewed the content, and did not find a violation of our policies, so, no action will be taken.”

According to the lawsuit, the plaintiff, who is now 17, responded:

“What do you mean you don’t see a problem? We both are minors right now and were minors at the time these videos were taken. We both were 13 years of age. We were baited, harassed, and threatened to take these videos that are now being posted without our permission.”

Feeling he had no choice, the plaintiff complied and sent the sexual predators videos of him engaged in sexual acts with another minor. However, he eventually got fed up with the blackmail and even blocked the predators.

They warned him he had “made a big mistake.” It seems they carried out that threat since a compilation of the videos surfaced on Twitter in 2019.

After realizing the videos had surfaced online, the plaintiff and his parent reported the issue to Twitter. However, the social media company, which claims to have zero tolerance for child exploitation, ignored their requests, and the videos circulated on the platform for nine days. That was despite the plaintiff providing proof of identity and age, and even reporting the accounts that were circulating the video.

The videos were only removed after the plaintiff’s mother contacted an agent at the US Department of Homeland Security. The agent raised the issue with Twitter, and the social media company did what it should have done all along.

Twitter removed the videos and reported the accounts that circulated the video to the National Center on Missing and Exploited Children. The video compilation, initially posted in 2019, got more than 167k views and over 2,000 retweets before it was removed. Even some Twitter users who saw the videos noted that the people featured were minors, according to the suit.

Why Twitter refused to remove the video immediately is unclear.

What’s more surprising is how Twitter allegedly doesn’t always take the same approach to deleting illegal content that it does to removing legal speech – a point that’s made by the complaint:

“Twitter does not deploy its extensive content moderation capacities to prevent or significantly reduce this abuse, even though it violates Twitter’s own policies on hateful conduct. Rather, upon information and belief, Twitter selectively removes or prevents some content on its platform, and selectively chooses not to remove or prevent other content.”

The complaint highlighted Twitter’s alleged hypocrisy by showing a recent thread from Twitter CEO Jack Dorsey about the banning of President Donald Trump from the platform: 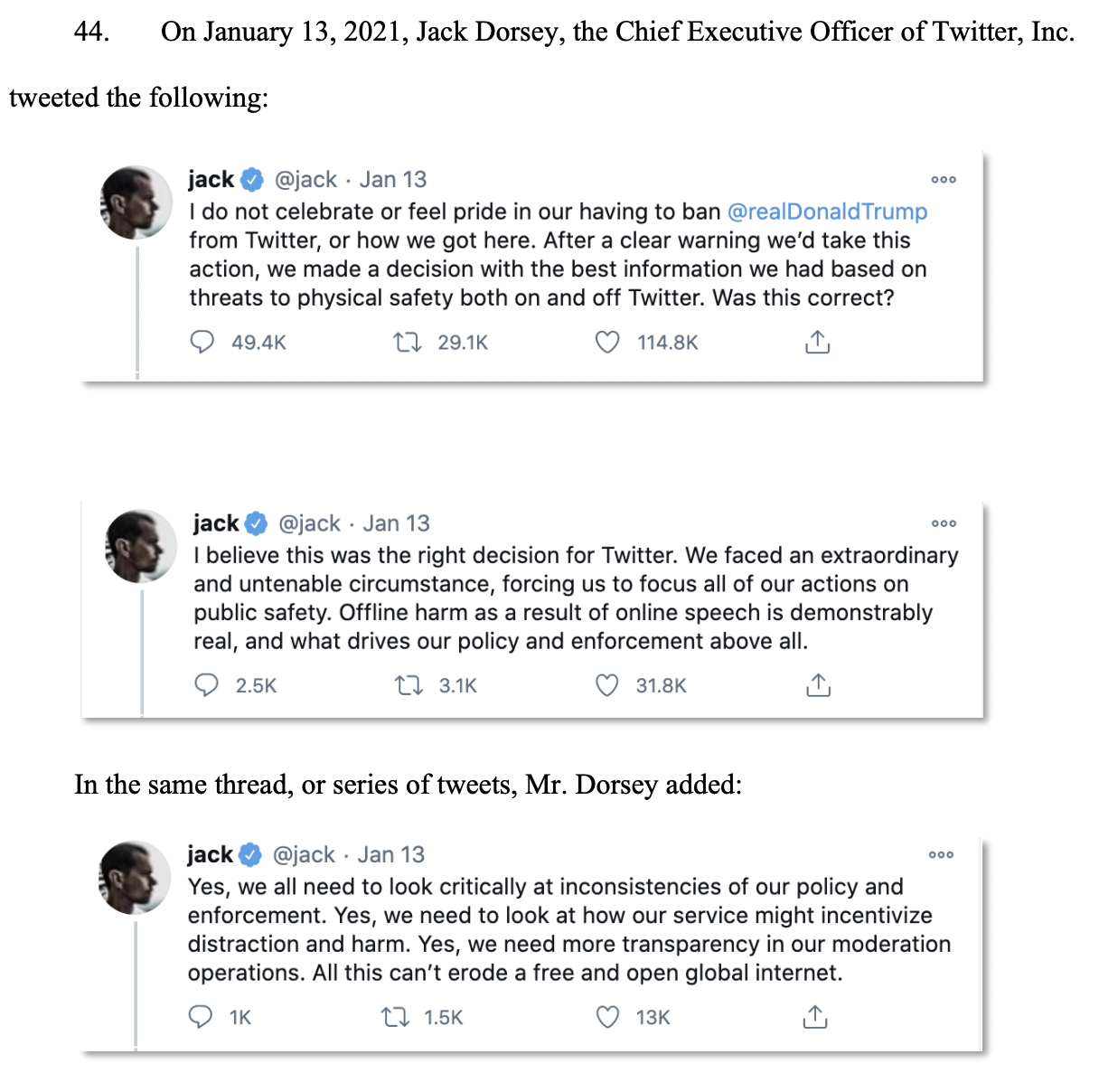 The social media company refused to comment on the specifics of the lawsuit, just saying “Twitter has zero-tolerance for any material that features or promotes child sexual exploitation. We aggressively fight online child sexual abuse and have heavily invested in technology and tools to enforce our policy.”

The lawsuit also alleges the inaction by Twitter allowed the person or persons behind the leaking of the videos to be able to post more content that sexually exploited minors. It further claims that one of the accounts that posted the video “had already been reported to Twitter for posting [child sex abuse material].”

However, “Twitter did not block IP addresses, or take other measures, allowing the person or persons behind [the] account to continue distributing sexually-exploitative material on the Twitter platform from other user accounts.”

Suing on behalf of the minor is the National Center on Sexual Exploitation Law Center and two other law firms. They want Twitter to be charged with negligence, receipt and distribution of child abuse, and violation of the duty to report child sex abuse. The suit aims to have Twitter compensate the plaintiff financially for the damages caused.