Twitter has banned Articles of Unity, a campaign group calling for non-partisan unity in the US.

The campaign was launched by Bret Weinstein, who announced the account suspension on Aug 28. According to him, Twitter suspended the account for “amplifying the hashtag #JustSayNotoDonadtandJoe.

“Twitter suspended #Unity2020&rsquor;s account for amplifying #JustSayNoToDonaldAndJoe as President Trump was accepting the Republican Party&rsquor;s nomination. Pull back the curtain and see how we got here: vague rules and selective enforcement are the duopoly&rsquor;s best defense. Heads up, @jack.” 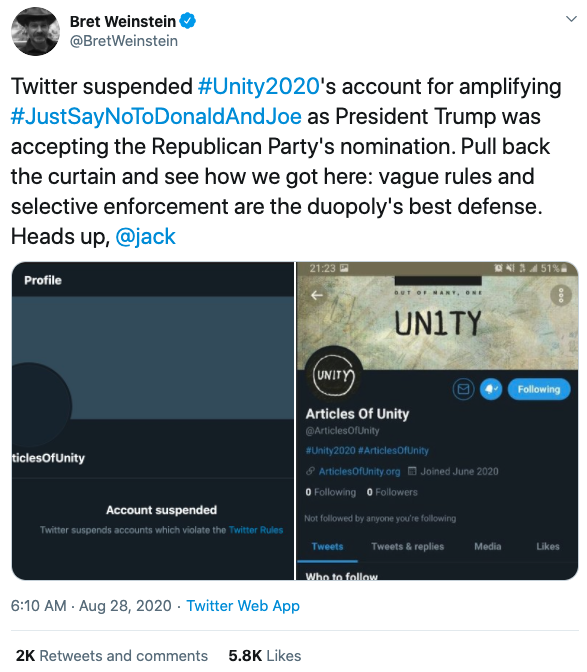 Before Articles of Unity got suspended, the hashtag had more than 11k tweets.

Professor Weinstein is a biology professor who rose to fame in 2017 after getting targeted by a radical mob of students at Evergreen State College in Washington. He is currently host of the Dark Horse podcast. 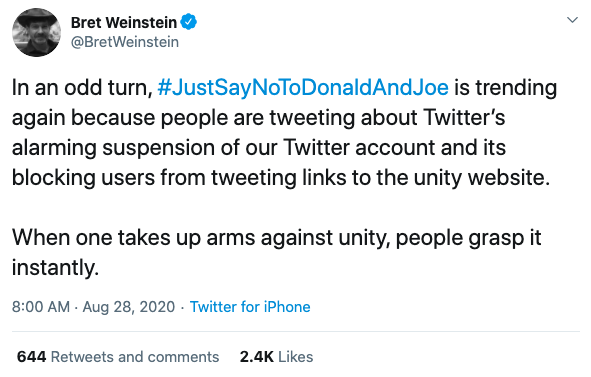 “In an odd turn, #JustSayNoToDonaldAndJoe is trending again because people are tweeting about Twitter’s alarming suspension of our Twitter account and its blocking users from tweeting links to the unity website.

“When one takes up arms against unity, people grasp it instantly,” Weinstein wrote on Twitter.

On the group&rsquor;s website, a statement in response to the ban reads, “It’s clear the establishment does not want this message of Unity to spread.”

In a pushback against Twitter&rsquor;s ban for amplifying the hashtag, supporters of the group created a video, showing the Twitter gods that they are real people and not bots.