People are tired of Wikipedia being used to portray a narrative rather than just provide fact.
Share

For at least one long-term “casual Wikipedia editor” it took the site citing The Mary Sue website as a source for a Star Wars article, and the overall review it gave to the franchise, to call Wikipedia out as being “broken.”

Twitter user Oliver Jia noticed an issue with The Mary Sue – a feminist geek site – being edited into Wikipedia’s current article on the Star Wars sequel trilogy as a source that stated that “many regard the newer films as being the best of the franchise.”

To give you an idea of how broken Wikipedia is, The Mary Sue is apparently what counts as a source for “many” people considering the Star Wars sequel trilogy the best in the series. pic.twitter.com/lUV8XyBsqT

Jia – who tweeted out screenshots of both Wikipedia and Mary Sue articles – highlighted that this is an example showcasing Wikipedia’s overall state of being broken as a reliable source of objective information. 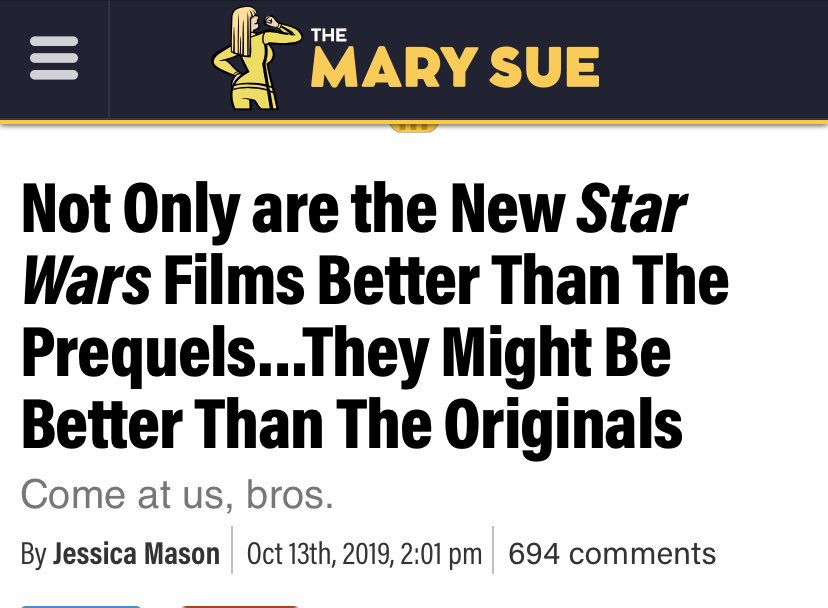 As a causal editor, he added, he had come across “echo-chamber bias among mods and major editors” in the past, that he describes as “incredible.”

“A site like Polygon or Kotaku could be blatantly wrong, but they’re still counted as reliable sources worthy of being cited,” Jia tweeted.

He also asserted that Wikipedia – rather, ostensibly, the Wikimedia Foundation that’s behind it – has made claims to being impartial, while the site’s track-record disproves it. He also noted that Wikipedia’s wealth of pages in many languages that produce sometimes radically different content on the same topic – depending on cultural and political slant – only compound the problem of a lack of objectivity.

“Makes you wonder how many people have been misled by Wikipedia,” Jia tweeted.

Wikipedia co-founder Larry Sanger has recently been looking at alternatives that can fix this bias within encyclopedia models.

Some of Jia’s commenters on Twitter pointed out that they thought Wikipedia was simply ideologically biased and prone to supporting social justice issues.

But other commenters on Twitter pointed out that Wikipedia has been “broken for years.” Perhaps even from the very beginning – as a combination of unrealistic expectations and bad delivery.

Wikipedia to this day touts itself as a free online encyclopedia created and edited by volunteers around the world. And to be fair – most of this, at face value, appears to be true. It isn’t necessarily Wikipedia’s fault that most web users are ready to accept it as an actual information authority, rather than just another index of information. It’s also not Wikipedia’s fault that users are ready to discard their own capacity for critical thinking.

In a way, Wikipedia is like fiat money of online information – whose value rests solely on everyone involved agreeing that it actually has any value at all.