Rapper Zuby locked out of Twitter for responding “OK, dude” to a transgender activist

Twitter has decided to interpret the use of the phrase “OK dude” on its platform as – hateful conduct.

Rising UK rapper Zuby&rsquor;s account @ZubyMusic was temporarily locked when Twitter decided to punish him for saying “OK dude” in an exchange with Emily Gorcenski, who is biologically male but identifies as a woman.

Zuby announced the news and provided the evidence for for his suspension on Instagram, including a screenshot of Twitter&rsquor;s rules against hateful conduct.

I've been temporarily locked out of Twitter for tweeting 'OK dude' in response to someome. Apparently that violates the 'hateful conduct' policy. ??‍♂️ Wow… I've appealed it.

These rules seek to protect users regardless of their race, ethnicity, sexual orientation, gender, gender identity, religion, etc. And the way to violate the rules is to promote violence, make threats or harass others.

Struggling to understand how “OK dude” fits into any of these categories, Zuby announced he would appeal Twitter&rsquor;s decision.

Gorcenski, aka “Pronoun Enforcer”, declared victory as a pronoun had been “enforced” – referring to Zuby as a misogynist.

The conversation between the two included Gorcenski telling the rapper that she had sex with more women than Zuby, to which he replied, “OK dude.”

Twitter and Instagram users who thought it was unjustified for the social network to react in this way said that Google defines “dude” – not unlike, “guys” – as a unisex term.

Moreover, instead of being a legitimate way to fight against hateful conduct, Zuby&rsquor;s supporters understand Twitter&rsquor;s move as yet another one stifling free speech in an escalating, and at times absurd, desire to impose a particular policy.

Gorcenski, meanwhile, has been accused of fighting abuse by abusing others, and being no stranger to controversial statements made on Twitter, which the platform treated as acceptable.

As one user tweeted Gorcenski on one occasion referred to “TERFs” (“trans-exclusionary radical feminist”) as white supremacists, urging Antifa groups to treat them like Nazis.

Emily regularly calls for violence against "Terfs", which is a derogatory term Trans activists label women who refuse to comply with absolutely every facet of Trans dogma.
Twitter's bias is extreme and insane. pic.twitter.com/uxMSZYytML 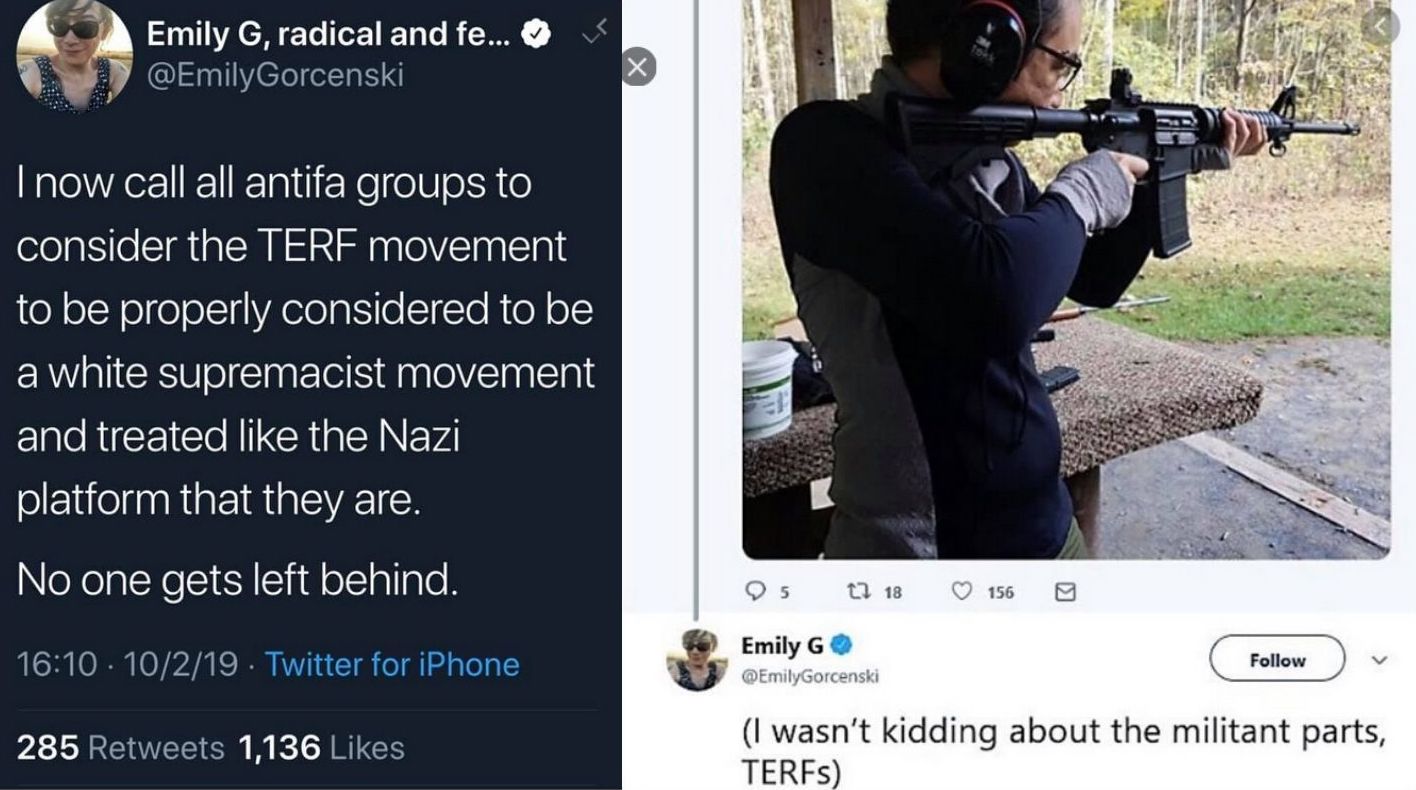 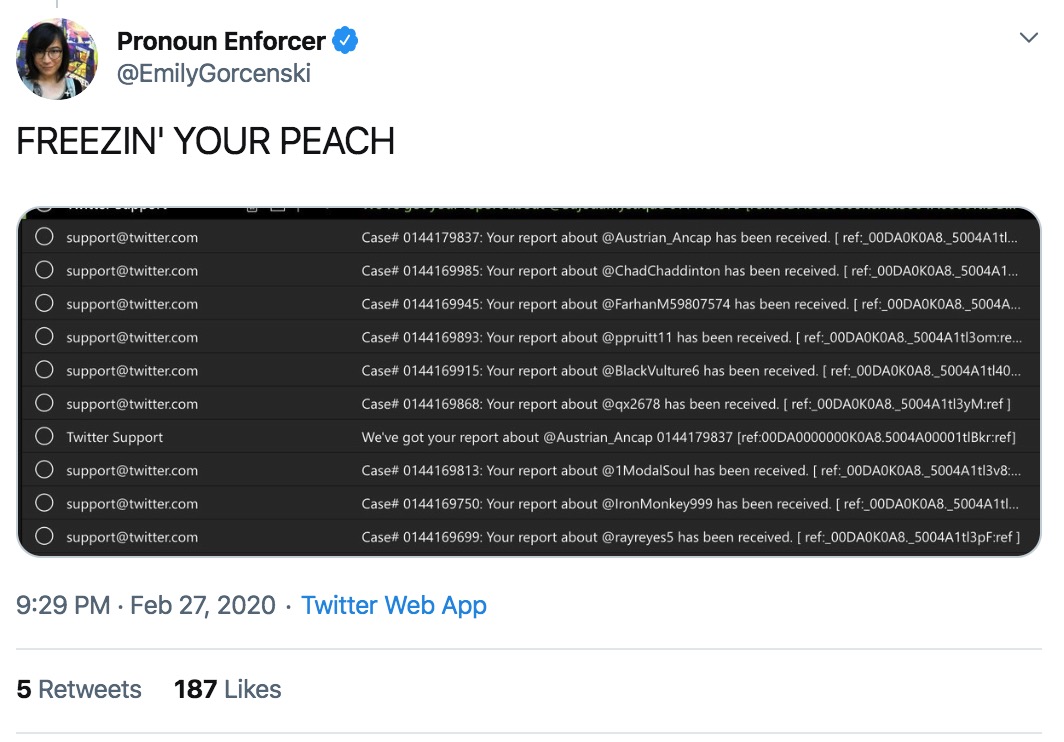 “I wasn&rsquor;t kidding about the militant parts, TERFs,” Gorcenski said in another tweet posted along with a picture of a person holding up a rifle at a shooting range.

However, this appears to have been in line with Twitter&rsquor;s rules against hateful conduct and making violent threats.

Many replies to Gorcenski&rsquor;s announcement of pronoun enforcement over Zuby said simply, “OK dude.” To this, Gorcenski responded by reporting more users to Twitter. 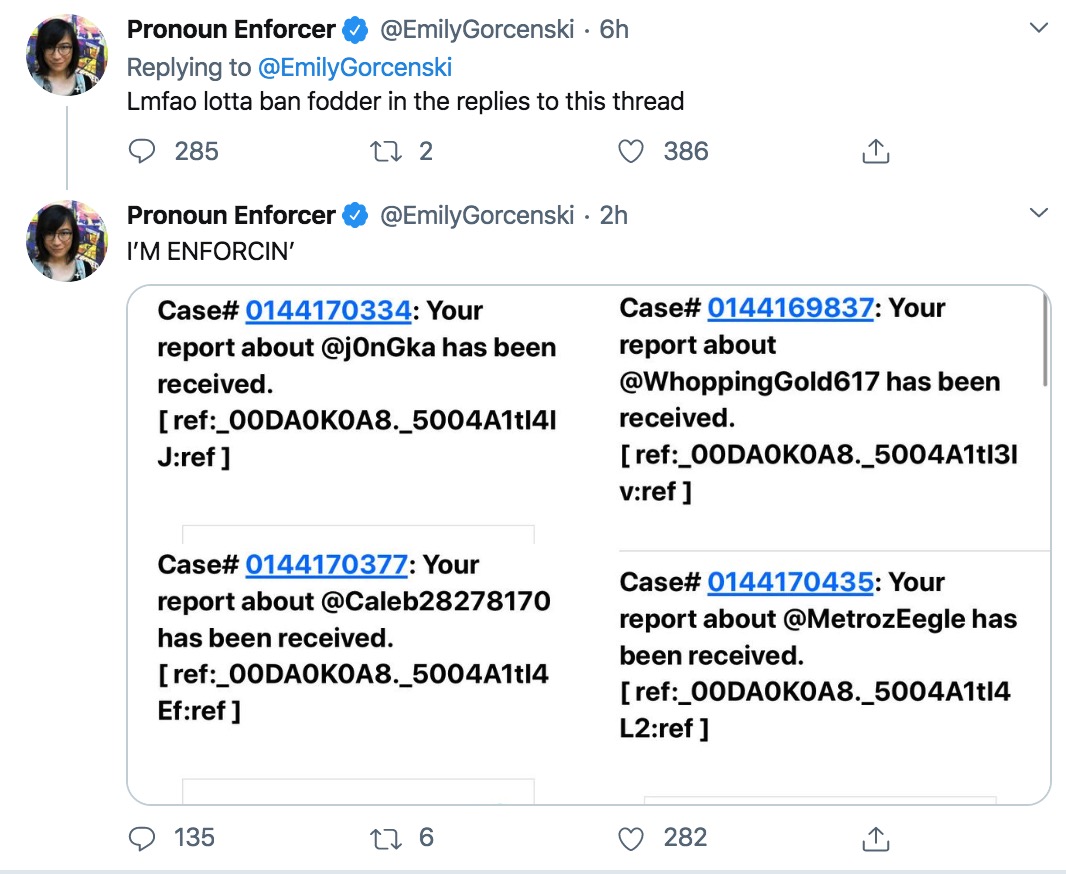 But all this did was cause even more “OK dude,” “Keep enforcing my dude,” “Good job dude,” and similar replies.