"The PRC’s goal is to replace you," warned Barr.
Share

United States Attorney General Bill Barr has accused Silicon Valley companies of helping to extend the Chinese government’s power over the American nation. According to Barr, mega-corporations are easily giving in to the demands of the Chinese Communist Party, dragging their policies to other countries.

During a speech Thursday at the Gerald R. Ford Presidential Museum in Michigan, Barr accused Hollywood and companies like Twitter, Facebook, and Google of being easily manipulated by the Beijing government. These mega-corporations have been forced to censor content or change their policies to satisfy Chinese regulators. However, on many occasions, the content they censor in China also is censored in the rest of the world.

As an example, Barr cited the movie “World War Z”, wherein one script that never came to light, it was suggested that the virus that brought humanity to an end had been born in China. The scene was rewritten to please China and in the end did not even come out in any country anyway. In Hollywood, there are many similar examples where the producers must adapt the films to be able to overcome the Chinese censors, but this does not justify that these cut versions should reach theaters in other countries.

Regarding Silicon Valley, companies such as Google, Yahoo, Microsoft, and even Apple have been willing to collaborate with the Chinese government to maintain their business within the country. Social networks like Facebook or Twitter have been accused multiple times of censoring content that speaks badly of the Beijing government, such as platforms deleting posts that suggest the coronavirus outbreak was in China.

“The Chinese Communist Party thinks in terms of decades and centuries, while we tend to focus on the next quarterly earnings report,” said Barr. “America’s big tech companies have also allowed themselves to become pawns of Chinese influence.”

“Corporations such as Google, Microsoft, Yahoo, and Apple have shown themselves all too willing to collaborate with the [Chinese Communist party],” he said.

“Appeasing the PRC may bring short term relief…but in the end, PRC’s goal is to replace you,” warned Barr.

As if to prove the point, during Bill Barr’s speech, a New York Times journalist tried to share a story related to alleged forced sterilizations carried out on Uygur women in China, but Twitter did not allow it because it was “suspicious.” 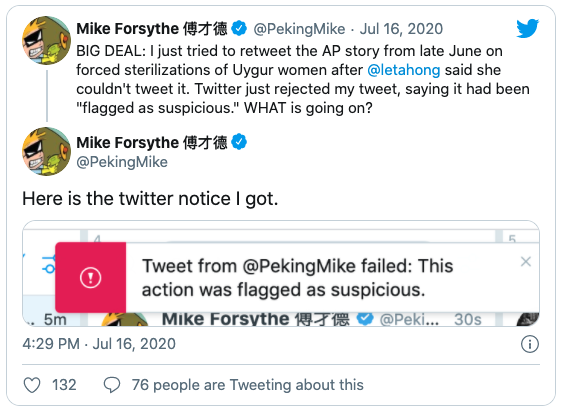