Ex employee says HR there is prone to "deflect to mental illness" and cover up any problems.
Share

Facebook and other tech companies, known rightly so as global giants, have grown over the past couple of decades not only in terms of massive revenues and influence, but also of their workforce.

Collectively, they employ thousands of people, but at the end of the day little is known about their corporate culture – beyond the perky and optimistic messages carefully crafted by their PR teams and sold to the outside world.

Also, Big Tech jobs are well-paid, motivating people to try to keep them regardless of any problems they may be experiencing in the workplace.

And if the picture painted by former Google and Facebook engineer Patrick Shyu is anything to go by – there are plenty of deeply ingrained and unaddressed problems inside these companies, sometimes seriously jeopardizing their employees’ well-being.

Shyu, who has made a name for himself on YouTube where he was more than half a million subscribers, mostly creating videos revealing insider details about the life of programmers – on Monday posted a video entitled, “Facebook employee suicide cover-up.”

The case concerns a 38-year-old who last week jumped to his death from a Facebook building. The way the company decided to react to the event prompted Shyu – but also other current employees posting on the anonymous employee app Blind – to question whether there is an attempt at work to misrepresent the suicide as apparently merely “a passing.”

Facebook’s possible motive here could be to deflect any attention from the reasons behind the suicide, namely, the company’s workspace culture, that is repeatedly described as “toxic” in the video and in the anonymous group’s comments.

Based on insider and unconfirmed information that he has had access to, Shyu explains that the story is that the employee committed suicide only an hour before he was due to file a review into a “SEV” – serious site event. The employee, who had been under mounting pressure for some time prior, apparently tried but failed to push back the date of the review, before deciding to end his life.

But as Shyu points out, if true, this would have been merely the straw that broke the camel’s back, as the employee had faced poor performance reviews putting him in danger of getting sacked, and even apparently had an attempt to transfer teams sabotaged by a manager who manipulated him. On top of everything, the employee’s H1B visa status as a temporary worker meant he was extra vulnerable to losing his job – and in the end, the long-term unaddressed stress of the job and the work environment seem to had finally caught up with him. 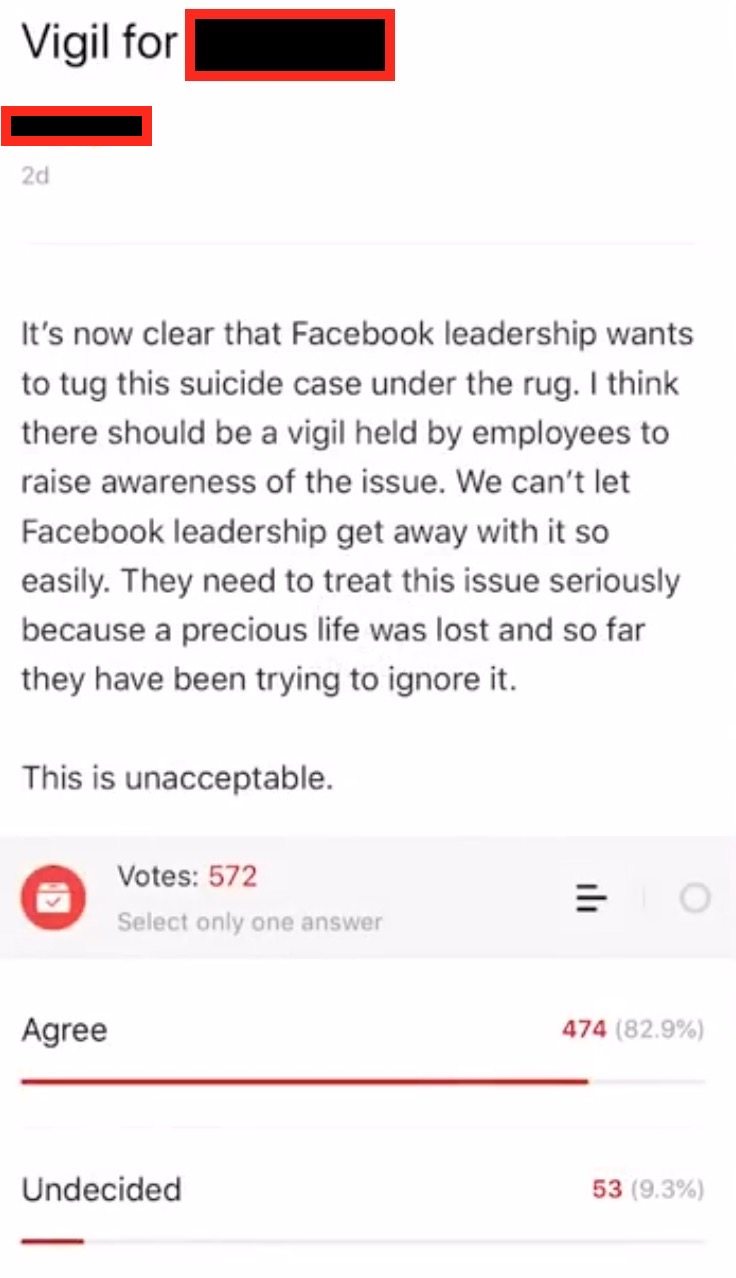 In an app that allows employees at an organization to communicate anonymously, one user wrote, “It’s now clear Facebook leadership wants to tug this suicide case under a rug. I think there should be a vigil held by employees to raise awareness of the issue. We can’t let Facebook leadership get away with it so easily. They need to treat this issue seriously because a previous life was lost and so far they have been trying to ignore it”. 82% of the Facebook employees that responded to the message agreed with the sentiment.

Another employee explained how they too had thought about killing themself over the pressures of the job.

However, this tragic story is not only about what happened – but also about how the company handled it.

In his own comments, Shyu points out that the company’s behavior was not all that surprising – with the management and the HR department usually holding Q&A meetings to address a crisis, where they answer the questions, advise employees to get help from a counselor, and carry on in the hope everything would be quickly forgotten – and crucially, without enacting any changes to improve the situation.

For this reason, Shyu urges Facebook employees to press the issue and demand answers about the employee’s suicide, and not allow the management to sweep it under the carpet, or misrepresent it – all the more since the way the employee died suggests he was trying to send a public message. Whether or not a mental disorder played into the tragedy, he continued, the HR there is prone to “deflect to mental illness” and cover up any problems. 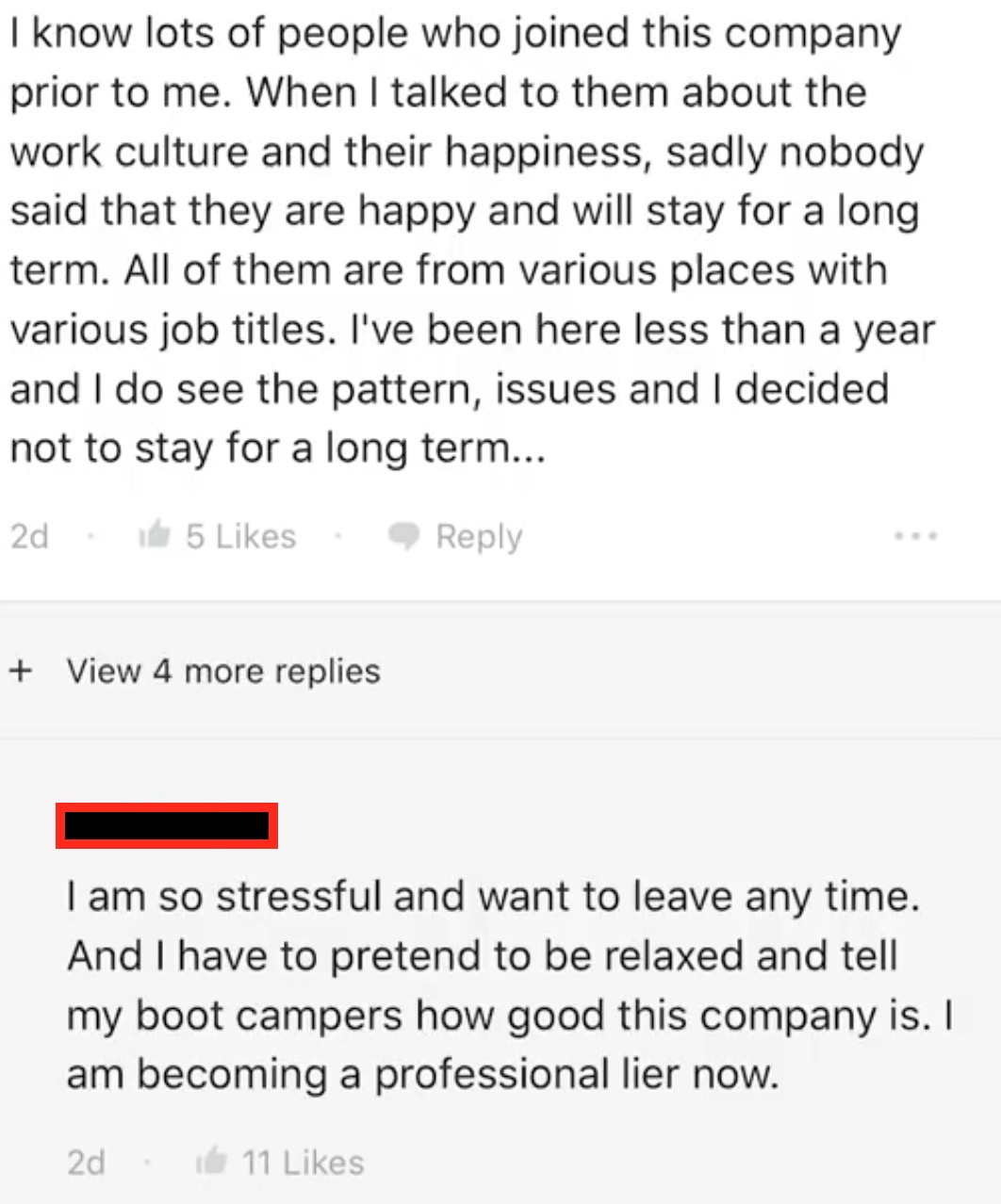 According to Shyu, Facebook’s internal culture suggests that this time, too, employees are being silenced and censored, discouraged from speaking about issues – while the company explains the odd manner of treating the case as respect for the suicide victim’s privacy – an argument that some commenters on the anonymous internal group have described as little more than Facebook’s “hypocrisy.”

And lastly, Shyu – who is calling for a full criminal investigation into workplace bullying – had this piece of advice for anyone working in Big Tech:

“These companies can and will just drive you into the ground. They will milk you for every ounce of blood that they can get. I would recommend that you always watch out for yourself and always have your best interest (at heart). No company is worth dying for, no company is your family.”