Firefox users are left frustrated this evening when a bug meant that almost all of their browser add-ons were disabled, including popular extensions such as LastPass, Ghostery, Dark Mode, uBlock Origin, Greasemonkey, NoScript, and many more.

Instead users were left with the following message for each extension: “…could not be verified for use in Firefox and has been disabled” 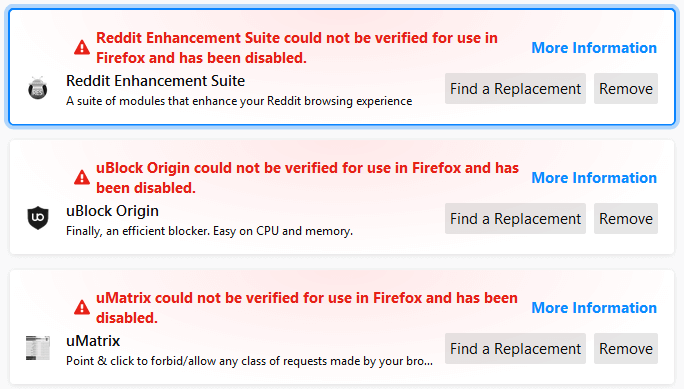 The bug, that’s still ongoing, it most likely an error involving the expiration of an intermediate signing certificate, as the errors appeared to start kicking in as it became midnight in the GMT time zone.

While it&rsquor;s down to negligence on Mozilla&rsquor;s part, Firefox wouldn&rsquor;t do something like this on purpose, as some have speculated, after reading that Firefox plans to prevent some addons working next month if they contain obfuscated code. This is a genuine bug and was unintended.

Since Firefox 48 and Firefox ESR 52, Firefox extensions need to be signed. Firefox will block the installation of extensions with invalid certificates (or no certificates), and that is causing the widespread issue on user systems.

Other than switching to an alternative browser until it&rsquor;s fixed, here are some temporary fixes we&rsquor;ve tested that may work in your instance:

Update: Mozilla product manager Kevin Needham supplied us with this statement at around 12 noon Eastern time on May 4th 2019:

Late on Friday May 3rd, we became aware of an issue with Firefox that prevented existing and new add-ons from running or being installed. We are very sorry for the inconvenience caused to people who use Firefox.

Our team has identified and rolled-out a fix for all Firefox Desktop users on Release, Beta and Nightly. The fix will be automatically applied in the background within the next few hours.

Until then, many users are likely to be better off using an alternative browser such as Chrome, Chromium, PaleMoon or Brave until it&rsquor;s fixed. (*Full disclosure: Brave is a partner of Reclaim The Net).