This comes after Senator Blumenthal pressed a Google representative on why the company wasn’t doing more to censor Jones and Infowars from YouTube search.
Share

Infowars attorney Norm Pattis has responded to what he describes as Senator Richard Blumenthal’s pressing of a Google representative to “expunge completely any trace of Mr Jones and Infowars from the YouTube searches,” saying “we take grave exception to the remarks.”

Blumenthal made the comments when questioning Google’s Vice President for Government Affairs and Public Policy Karan Bhatia during a Senate Judiciary Committee hearing titled “Google and Censorship through Search Engines.”

Before presenting his questions, Blumenthal disclosed that:

Blumenthal then went on to accuse Jones and others of spreading lies in the wake of the Sandy Hook shooting and argued that their coverage of the shooting does not constitute speech and that Google’s machines aren’t doing enough to censor their content:

“This stuff is not speech it’s incitement, harassment, defamation. I respectfully suggest whatever your machines are, they’re not working, would you agree?”

Bhatia responded by saying hoax videos of the kind Blumenthal referenced have no place on Google’s platforms and talked about how YouTube had amended its community guidelines earlier this year to make it clear that “any such video that comes up will be taken down immediately.” While Bhatia didn’t specify which community guidelines change he was referring to, he was likely talking about the change that prohibits any content which questions the validity of public violent incidents.

Bhatia added that given the number of videos that are uploaded to YouTube, the company has to depend on tools or machines to spot videos that violate these policies and that these machines are constantly improving.

Blumenthal seemed unsatisfied by Bhatia’s response and suggested that “the machines are not working” and continued to push Google to do more to take down this type of content with Bhatia responding by committing to continued investment and improvement in this space.

In a letter to Senator Lindsey Graham, Pattis said that Blumenthal’s attacks on Jones and Infowars would, in most other contexts, be slanderous and that they are already being actively litigated:

“Senator Blumenthal’s stated basis for the attack on Mr. Jones and Infowars was the assertion, slanderous in any other context than a legislative chamber or courtroom, that Mr. Jones continues to “deny” the reality of the mass shooting at the Sandy Hook Elementary School in Newtown, Connecticut in 2012, and that Mr. Jones has conspired with, and continues to conspire with, others to cause emotional distress to the families or surviving family members and first responders to the shooting. These claims are being actively litigated in Connecticut in lawsuits handled by a firm employing Senator Blumenthal’s son, Matthew.”

Pattis then went on to question why Blumenthal is pushing for more censorship in a hearing that’s meant to be investigating Google’s censorship:

“We do question why, in a hearing about censorship by Google, a United States Senator was calling for more effective silencing of the right to speak freely. We are particularly concerned that repeated attacks on Mr. Jones and Infowars are waged without effective opportunity for Mr. Jones, or his designated representative, to appear and to set the record straight. As we see it, Senator Blumenthal’s various attacks on Mr. Jones are part of a concerted effort to chill speech in anticipation of the 2020 general election.”

Pattis added that Jones is considering suing Google, Facebook, and others over their content-based censorship:

“Mr. Jones is contemplating litigation against Google, Facebook and others to determine whether the broad immunity conferred upon social media companies from suit for publication of material generated by others under Section 230 of Communication Decency Act necessarily entails a corresponding duty to refrain from content-based censorship. Such litigation would be an expensive challenge. We would like an opportunity to offer testimony on whether such an amendment to the Act would be in the public interest.”

Pattis finished by saying he, Jones, and Infowars want the letter to be added to the public record and want to be given an opportunity to respond to similar attacks in the future:

“We are asking that this letter be made part of the public record as to the July 16, 2019 hearing. The gratuitous and erroneous attacks on Mr. Jones and Infowars will no doubt continue, but, at a minimum, we request a meaningful opportunity to respond the next time the community convenes.”

These comments from Blumenthal come after Alex Jones has been censored from most major platforms on the internet over the last year. The most recent example of this censorship is Alex Jones and Infowars editor-at-large Paul Joseph being banned from both Facebook and Instagram because they are supposedly “dangerous individuals.” At the same time that this ban was rolled out, Facebook banned linking to and sharing Infowars content, unless the Facebook post is “explicitly condemning the content.”

They also come after YouTube has rolled out numerous new policies which have led to the mass censorship of creators on its site. Despite the collateral damage for its creators, YouTube is continuing to push forward with pro-censorship policies such as its recently announced “creator-on-creator harassment” rules which are likely to shut down debate and discussion on the site. 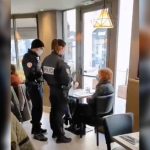