He has also welcomed social media's censorship of President Trump and the use of government propaganda.
Share

Richard Stengel, the head of the Joe Biden transition team for US state media outlets, is an outspoken supporter of “hate speech” laws, social media censorship, and other means that restrict or editorialize people&rsquor;s speech.

Stengel was recently named on the Biden transition website as team lead for the US Agency for Global Media (USAGM) – a US government-owned agency that&rsquor;s responsible for operating several state-owned media outlets which include Voice of America and Radio Free Europe/Radio Liberty.

Yet Stengel&rsquor;s past statements and roles show that he has a history of advocating for the suppression of speech based on censorship buzzwords such as hate speech, “disinformation,” and “misinformation.”

In 2019, Stengel wrote an opinion piece for The Washington Post titled “Why America needs a hate speech law.” In the article, Stengel suggests that hate speech “undermines the values that the First Amendment was designed to protect” and calls for states to “experiment with their own version of hate speech statutes to penalize speech that deliberately insults people based on religion, race, ethnicity and sexual orientation.”

Stengel has also claimed that several of the President&rsquor;s statements are hate speech and tweeted that if America were to adopt a hate speech law, “the President might be in violation of it.”

In addition to advocating for hate speech laws, Stengel has also called for a rethinking of the First Amendment.

During a May 3, 2018 panel discussion at the Council on Foreign Relations (CFR), Stengel stated: “I actually having once been almost a First Amendment absolutist, I&rsquor;ve really moved my position on it because I just think for practical reasons and for society we have to kind of rethink some of those things.”

And during an MSNBC interview, Stengel claimed: “The First Amendment doesn’t protect false speech about a virus or false speech that endangers the health of your users.”

Stengel&rsquor;s support for speech restrictions doesn&rsquor;t end with his views on hate speech laws and the First Amendment.

He has also cheered on Big Tech platforms&rsquor; censorship of President Trump and described their censorship of hate speech and misinformation as “fair.” 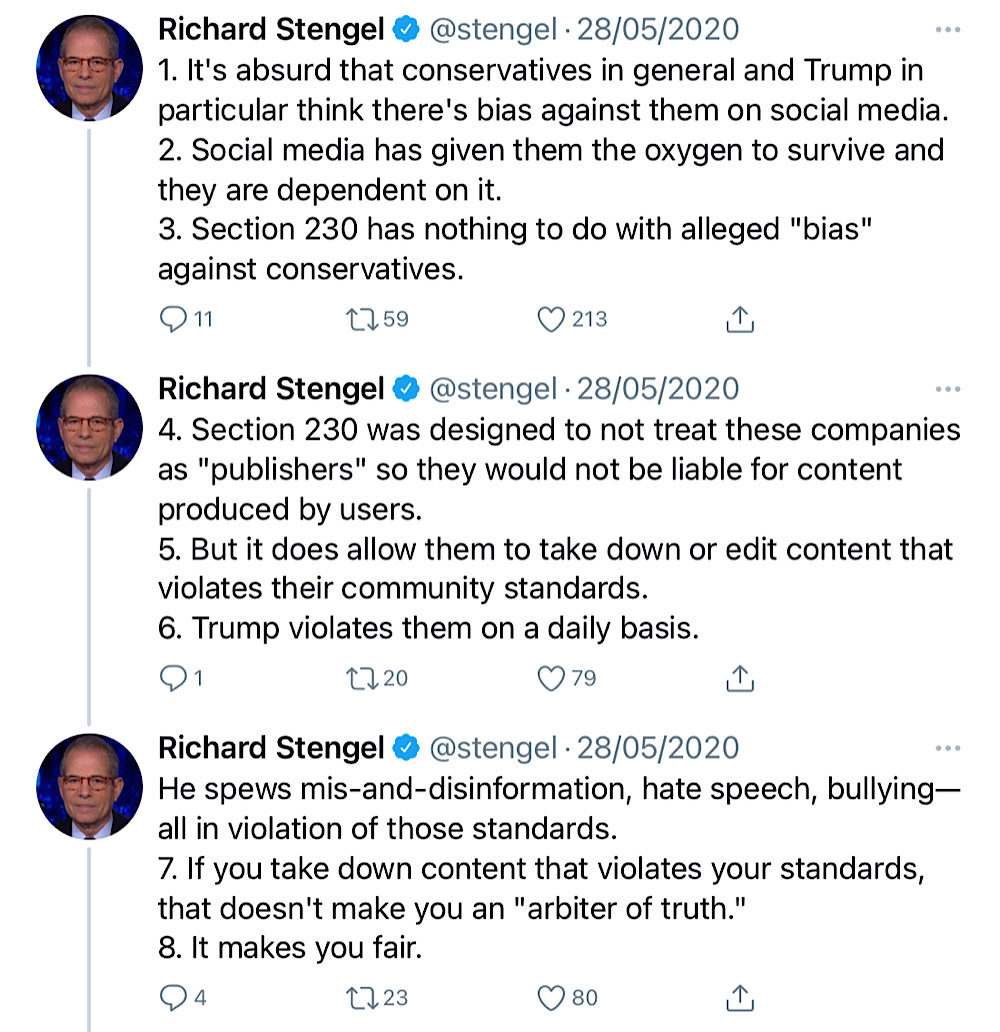 And during the same MSNBC interview where he claimed that the First Amendment doesn&rsquor;t protect false speech that endangers health, Stengel said Facebook and Twitter need to be “even more vigilant” about taking down content and that “Google needs to be even more vigilant about what they prioritize in their search results rather than emotional and inflammatory conspiracy theories that get people&rsquor;s eyes.”

Additionally, Stengel has worked closely with the Atlantic Council&rsquor;s Digital Forensic Research Lab – a US think tank that helps Facebook take down what it deems to be “fake news.”

In a specific demonstration of one of his proposals to curtail speech, Stengel has repeatedly argued that television news networks shouldn&rsquor;t show the White House Coronavirus Task Force briefings live and should instead show them on a delay where they&rsquor;re subject to “corrections & reporting.” 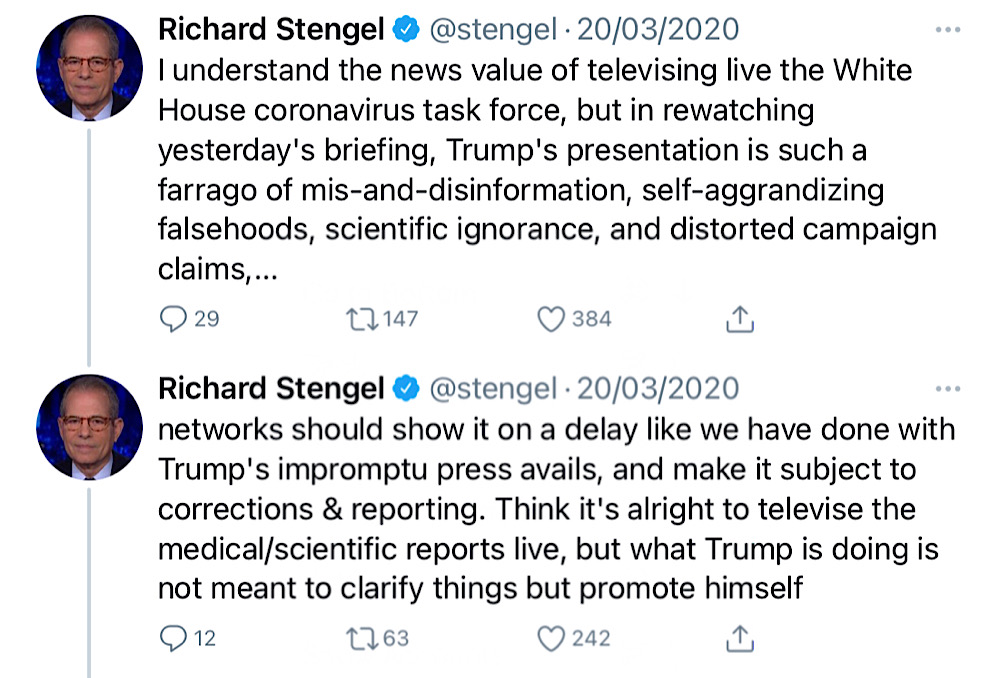 He has also suggested that if these press conferences continue to be shown live, news networks should start sending “experts” to “push back in real-time against the propaganda and disinformation.” 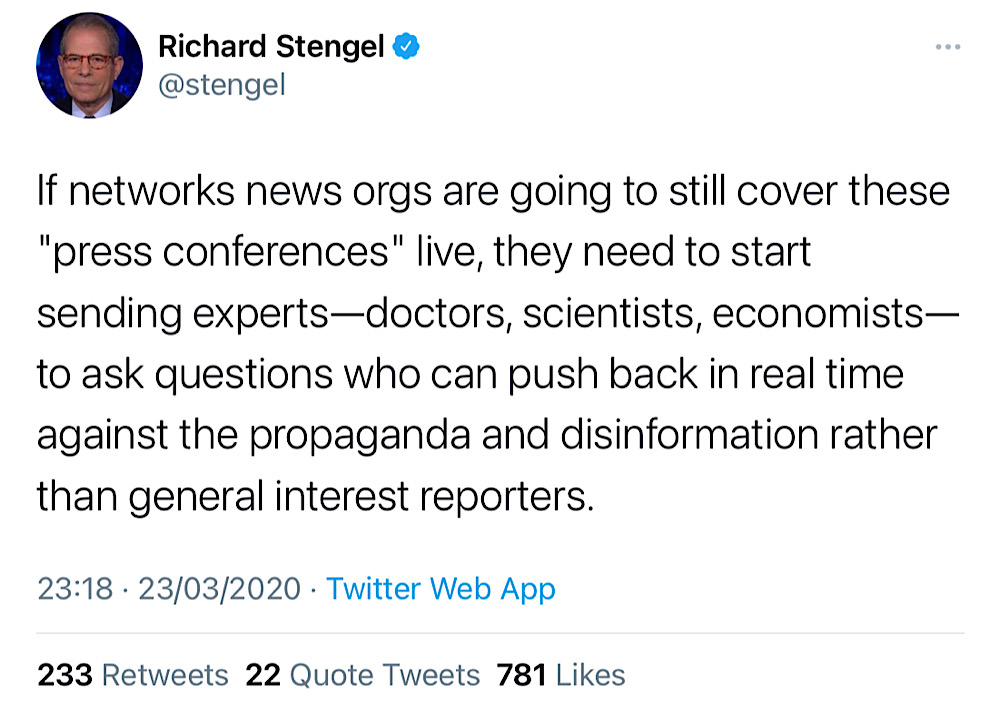 While Stengel is a proponent of suppressing or editorializing speech to push back against statements that he deems to be hate speech, misinformation, or propaganda, he has a different perspective when he&rsquor;s the one pushing the propaganda.

During his 2018 appearance at the CFR panel, Stengel discussed his role as President Obama&rsquor;s Under Secretary of State for Public Diplomacy and Public Affairs between 2014 and 2016 and described propaganda as something every country has to do:

“My old job at the State Department was what people used to joke as the chief propagandist job. We haven&rsquor;t talked about propaganda. Every country does it and they have to do it to their own population and I don&rsquor;t necessarily think it&rsquor;s that awful.”

Stengel&rsquor;s appointment comes as the Biden campaign has put forward several other online censorship proposals. This month, it demanded more post-election Facebook censorship and last month, the Biden campaign revealed its plans to create a task force to crack down on online “harassment” and proposed an end to the online sale of firearms and ammunitions.

Biden&rsquor;s transition team is also filled with employees from Big Tech companies such as Facebook and Twitter. These companies have deployed unprecedented levels of censorship over the last few years, much of which has benefited Biden.