The mob has been out in full force.
Share

“Boring” might seem like a pretty good description of the way media have gotten themselves invested in covering the stirrings in the British royal family – namely, what Prince Harry and his wife, Meghan Markle, might or might not do next with their lives.

Who knew, then, that such a simple statement might devolve into a “race” and “woke” war? To be fair – probably anyone who has been around the internet and the media during the past couple of years.

But still, this case of media/social media outrage is a little different, as it involved a member of a Britain’s actor “dynasty” – namely, Laurence Fox – who dared to go on the BBC and refer to the whole “Mexgit” thing as not rooted in race at all, and pretty boring, overall. That is – Fox and mixed-race university lecturer Rachel Boyle both appeared on BBC Question Time last week to debate the issue of the press coverage of Markle, i.e., the Duchess of Sussex.

And while Boyle said Markle was a victim of “a racist media backlash” – Fox said said this was a “boring” argument – at which point Boyle said he was “a white privileged male” – and then the actor called her – “racist.”

However, both participants seem to have suffered somewhat for their media performance art. Over on Twitter, Boyle said she was the recipient of a large number of email and Twitter hate messages from “mainly people who seem to hold alt right views.”

Laurence Fox, meanwhile, shared his own hate mail: a screenshot of what looks like an actual death threat he said he received from one “Chris L”: 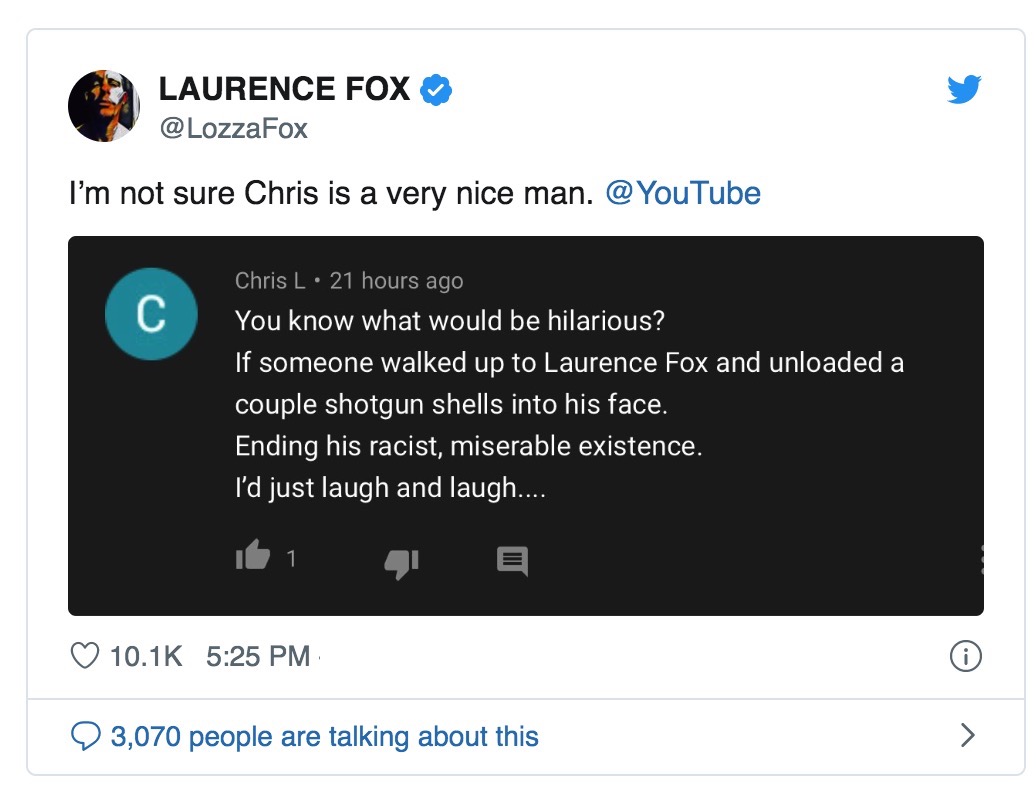 “You know what would be hilarious? If someone walked up to Laurence Fox and unloaded a couple shotgun shots into his face. Ending his racist, miserable existence. I’d just laugh and laugh.”

Shocked followers tagged the London police, hoping they would deal with this and advising the actor to report the threat “not just to Twitter but to the police.”

The people continually posting abuse, death threats and trying to get Laurence Fox sacked realise that:
A) you’ve proved everything about woke people being fascist and intolerant is true
B) you’re outing yourself as a literal racist for all us to see.
Utter cringe. pic.twitter.com/1yl5uQtaEk

However, the police in UK’s capital said they received no formal complaints about this matter.

Fox, meanwhile, seems to relish in his criticism of “woke hypocrisy” – highlighting that identity politics are in essence extremely racist, and branding “woke” activists as “fundamentally racist – they see color everywhere.”

Talk about doubling down – how about this “Anti-Woke Anthem” the actor has come up with.

It remains to be seen if Laurence Fox really has the power to turn the cultural tide on the “woke”.