On November 13, the local government of Mexico City tweeted that contact tracing through a QR code system would be compulsory at public places such as restaurants.

“All persons entering a closed space must scan a QR code with their mobile device,” the graphic stated, atop a list of steps spelling out how the program will work.

“The system will allow us to identify positive cases and stop chains of contagion. Therefore, its use will be mandatory,” the local government announced.

The Mexico City authorities planned to make it compulsory for businesses since the city is on high alert for COVID. The QR code would have to be displayed at the entrance of any premise. People entering the business would then have to scan the code using an app on their smartphones. After scanning, their numbers would be added to a database so that they would be contacted if someone who visited the same business later tests positive for COVID.

However, residents of Mexico City took issue with the fact that the government wanted to make the contact tracing through the QR code system compulsory.

“I’m not going to scan anything. Thanks for the suggestion, though,” one person replied.

“No, it’s not our duty to give you our data. You have earned our mistrust. Nor should it be mandatory to carry a cellphone,” Verónica Calderón, a journalist, wrote in a tweet. 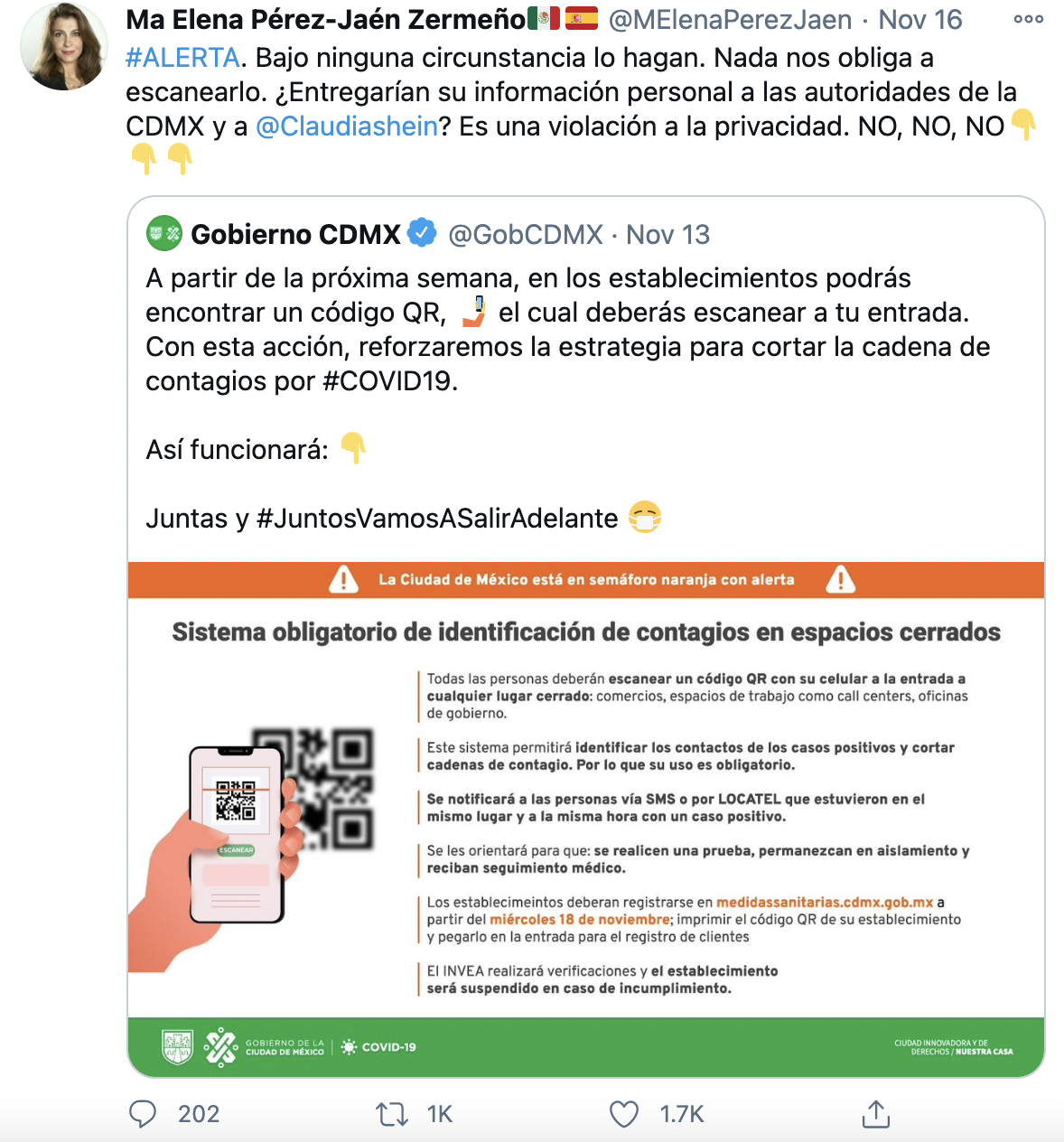 María Elena Pérez-Jaén Zermeño, a former commissioner at the Federal Institute for Access to Public Information, now a privacy advocate, advised her 75k followers not to use the QR code system “under any circumstances.” She called the system “a violation of privacy.” Her tweet got more attention than the original tweet by the Mexico City government.

Mexicans do not have a problem with QR code technology. In fact, QR codes are common at restaurants for browsing menus. However, they are not ready to use a QR code to hand over private data to the government.

Mexicans have good reasons not to trust the government. For instance, in 2017, it was discovered that the federal government was using spyware that was supposed to help track terrorists to track its critics.

To many Mexicans, the government would eventually use the contact tracing through the QR code system for the wrong reasons. Mostly that’s because the government is not very good at respecting the rights of its citizens.

The backlash to the idea of a compulsory contact tracing system forced the local government to backtrack. On Thursday, four days before the day the plan was supposed to be implemented, the government announced that the use of the QR code app would not be compulsory for both individuals and businesses since more people said they would ignore it.