A post on Reddit’s r/Coronavirus community that garnered more than 20,000 upvotes has been removed by what the social network ironically calls its moderators’ “Anti-Evil Operations team.”

The notification mentions that the post – entitled, “China may have prevented 95% of virus cases if it acted on silenced whistleblower’ warning” – had been removed because it violated Reddit’s User Agreement and Content Policy. 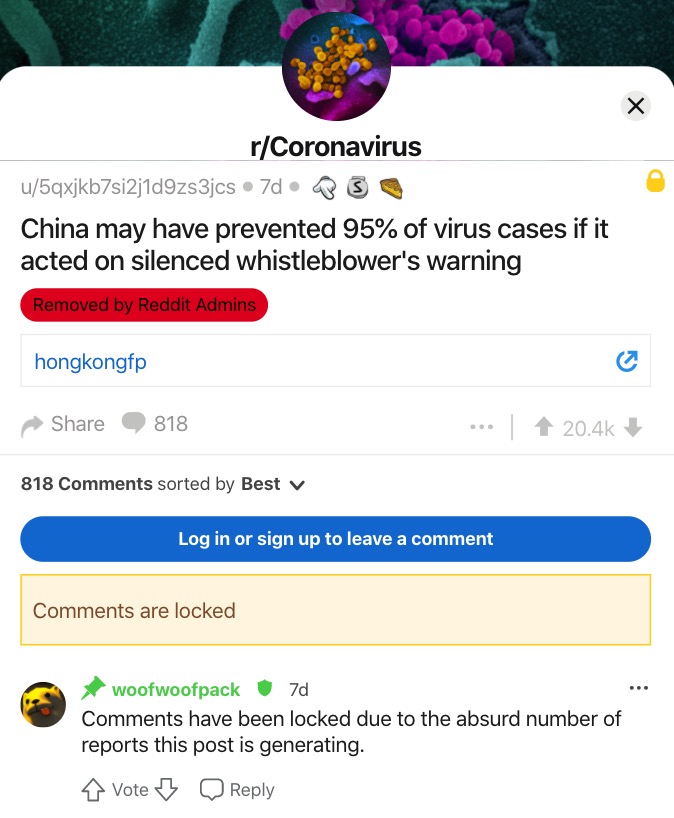 Another message posted by the subreddit’s administrators said the thread had been locked and new comments disallowed “due to the absurd number of reports” the post was generating.

Needless to say, there is nothing in Reddit’s User Agreement or Content Policy about banning posts for generating an “absurd number” of reports per se.

You shouldn’t be able to get a post banned just because you disagree with it: instead, Reddit’s rules cite things like illegal content, involuntary pornography, sexualization of minors, incitement of violence, threats or bullying, disclosure of personal information.

What’s likely to have happened here is that the post proved to be polarizing: collecting a large number of upvotes, but also comments and reports disapproving of the article published by the Hong Kong Free Press, HKFP.

This media outlet is known for its anti-Beijing stance, which, judging by the comments on Reddit, rubs many users the wrong way and makes them distrust all of its reporting.

The subreddit’s solution has been to remove the post and lock the thread, but explain it rather unconvincingly as a violation of Reddit’s rules.

The offending article quotes a recent study conducted by the University of Southampton and published by WorldPop, which suggests that China was late to react to the outbreak of the virus that originated in the city of Wuhan in late December.

This accusation has been persistent in some quarters ever since it became clear that the outbreak would turn into a pandemic.

Meanwhile, the study that is still awaiting peer review concluded that had China taken measures to curb the spread of the virus a week before it did, the number of people infected by it would have been reduced by 66 percent.

If, on the other hand, these measures came three weeks later, the outcome would have been 18 times worse in that country, researchers claim.