Six Days in Fallujah vs the perpetually offended

A new petition aims to get the game canceled.
Share

A petition has been launched addressing the UN, President Joe Biden, US, Canadian, and Iraqi governments, as well as Victura, Steam, Valve, PlayStation, and Microsoft with the goal of stopping the release of the upcoming Six Days in Fallujah game.

This is the second attempt to release the game – based on one of the bloodiest battles fought in the Iraqi war – after Konami in 2009 decided to drop it amid what they said was public backlash, saying also that it was led by the families of US soldiers killed during the clashes.

At the time, Konami said the intention was to “convey the reality of the battles to players so that they could feel what it was like to be there” – having previously defended its decision to publish the game to critics by saying it was after all, just a game.

Victura and Highwire Games picked it up in the meanwhile and recently announced its release, which is again provoking strong reactions by those who think its goal is to “whitewash” war crimes and somehow even incite people to commit mass shootings.

The petition, posted on Change.org, is one of the efforts to cancel the game, accusing it of promoting mass murder, dehumanizing Iraqis and Arabs, and going as far as brainwashing gamers into becoming racists. 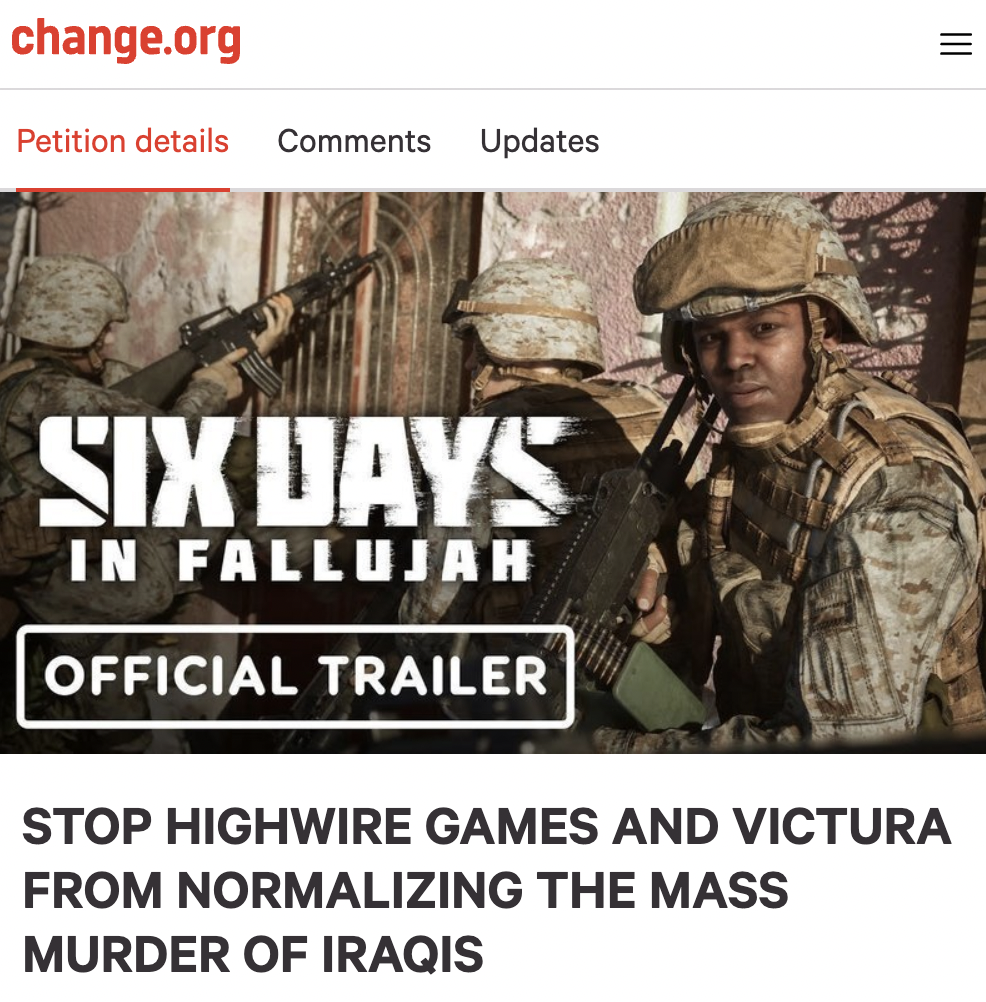 And this is not the only criticism that’s been coming the game’s way, as Kotaku is referring to it as a “war crime simulator” and a propaganda for the US war machine.

Those now decrying war crimes and war machines forget that mainstream media (like the New York Times) made sure to promote the idea of going to war in Iraq, based on the weapons of mass destruction narrative.

Like much art these days, the game is the latest opponent for a censorial mob – hall monitors of culture who, instead of just not taking part in something they don’t like, seek to destroy it completely.

Six Days in Fallujah developer in the Konami era was Atomic Games, whose former CEO now has his own company, Victura. Its website states that the game’s creators spoke with more than 100 US soldiers and Iraqi civilians in order to make a game that is based on real life scenarios and played either as a soldier or an unarmed civilian, but not as an insurgent.

Victura also said that based on the stories of those interviewed during the development process, they “invested more than three years building technologies to explore specific parts of the combat experience more realistically than other games have so far.”