A summary of the latest, sometimes expletive-riddled, revelations.
Share 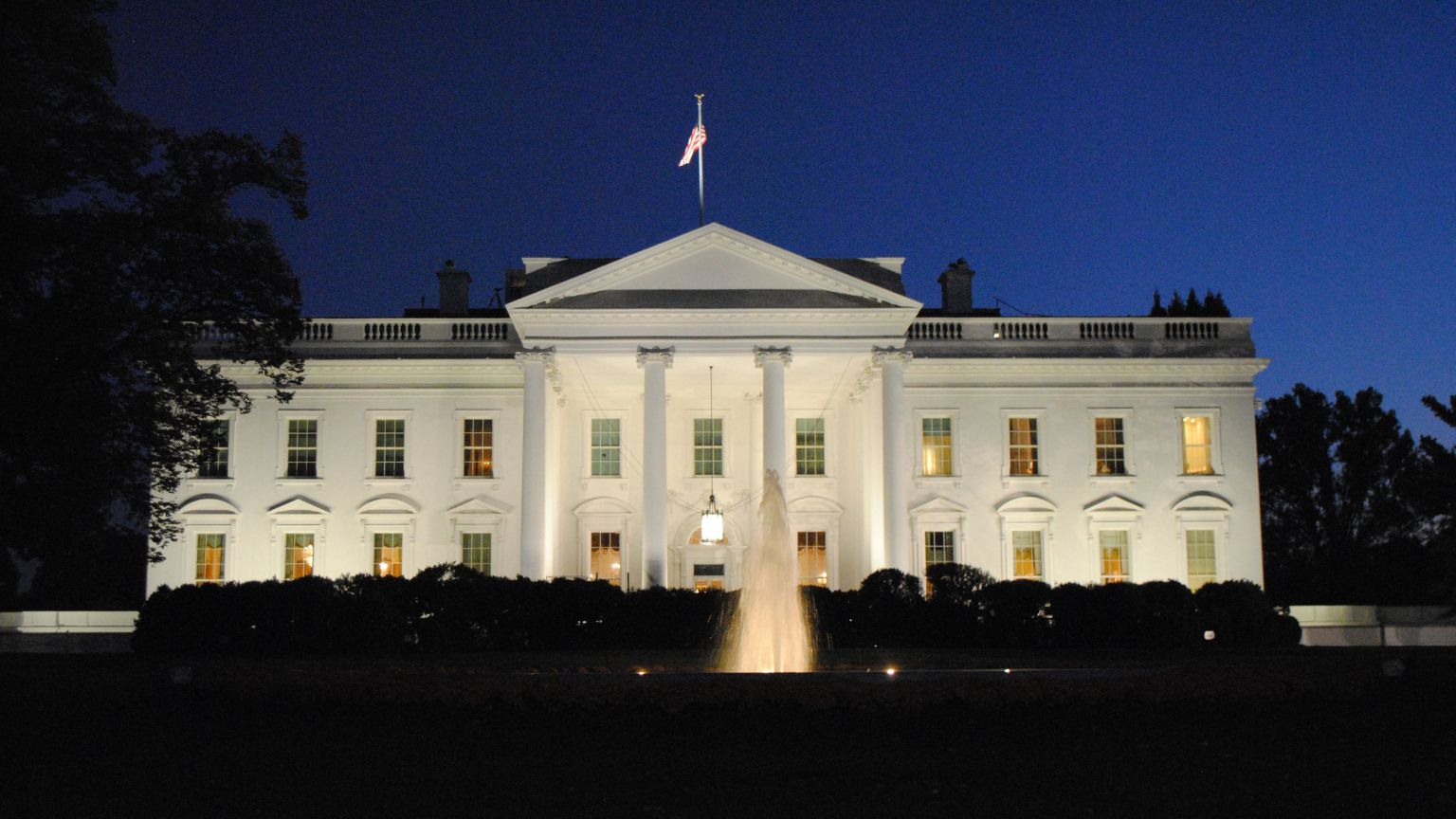 The latest batch of revelations into the social media censorship directed by the Biden White House reveal a range of broad, often petty, censorship demands, some of which are purely requests to boost President Biden’s image and show him and his family in a better light.

The revelations came as part of the discovery in the ongoing lawsuit against the government for its alleged First Amendment violations, making clear requests to silence American citizens through online platforms.

The New Civil Liberties Alliance (NCLA), also a plaintiff in the lawsuit, shared some of the documents obtained during discovery.

Today we explore some of the new revelations:

The documents show that White House Director of Digital Strategy Rob Flaherty pressured Facebook to censor “borderline content” that did not necessarily violate the platform’s COVID-19 misinformation policies, but could result in vaccine hesitancy.

On March 21, 2021, Facebook caved to the pressure and agreed to limit the spread of “often true content” that undermines people’s confidence in vaccines by removing groups and pages that are “disproportionately promoting this sensationalized content.”

White House Director of Digital Strategy Rob Flaherty sent an email to Facebook with the subject line, “You are hiding the ball.” In the email, Flaherty referenced an article by The Washington Post about research by Facebook on the drivers of vaccine hesitancy on its platform. Flaherty added the White House’s COVID-19 response team senior adviser Andy Slavitt to the thread. 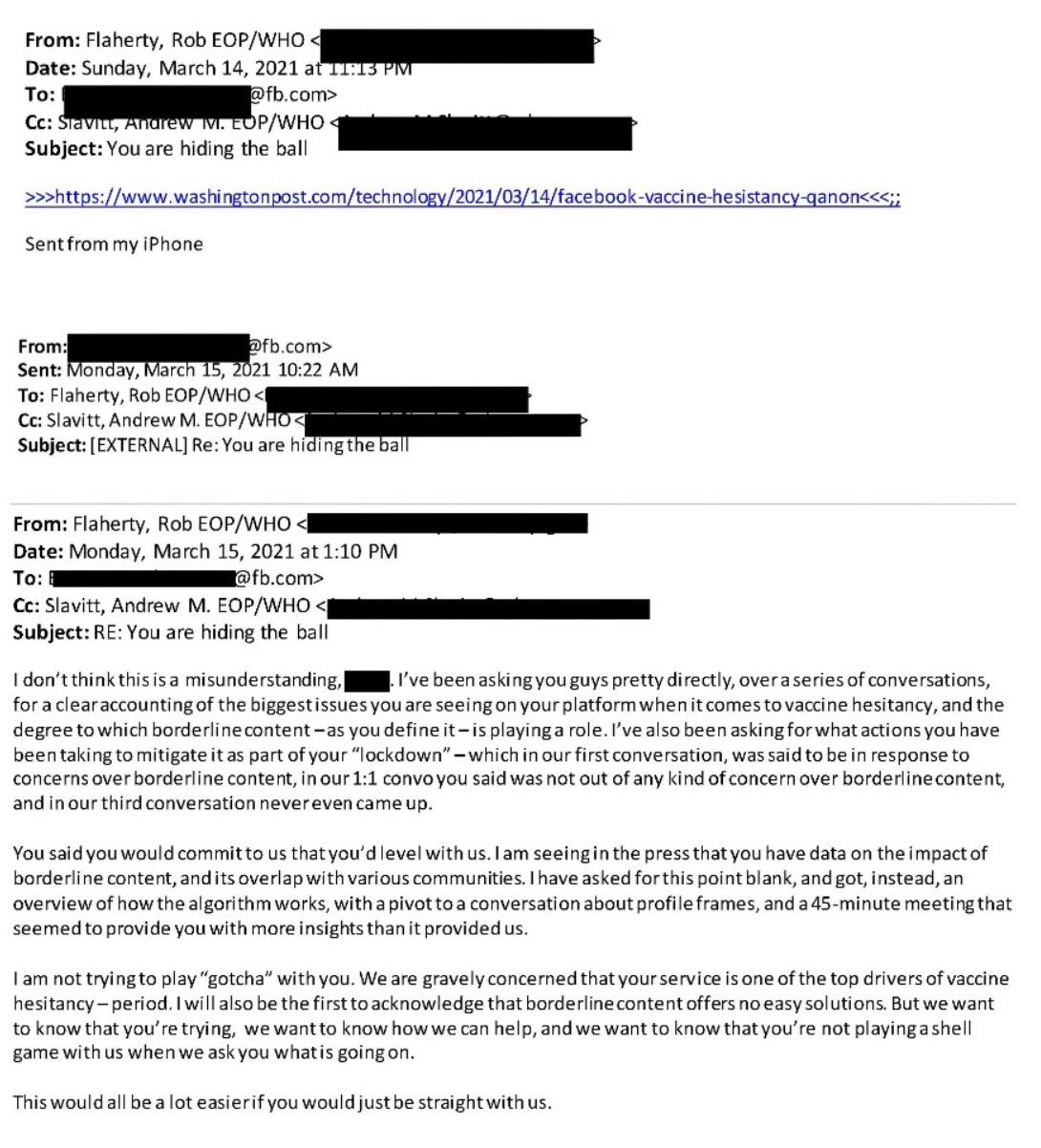 An executive, whose name is redacted in the documents, replied that there was a “misunderstanding.” Flaherty replied that he had been asking “pretty directly” about how much “borderline content” has been increasing vaccine hesitancy and the steps the company is taking to reduce the spread of such content.

Flaherty noted that The Post’s report showed “you have data on the impact of borderline content” but the company was taking him in circles when he asks for it. He added that the White House was “gravely concerned” that Facebook is a “top driver” of vaccine hesitancy and they wanted to know what Facebook is doing about it and how the White House could help and to confirm that “you’re not playing a shell game with us.”

Slavitt wrote that Facebook appeared to be “trying to meet a minimum hurdle instead of trying to solve the problem” of misinformation compared to other platforms.

“You also asked us about our levers for reducing virality of vaccine hesitancy content,” the Facebook staffer replied. “As you know, in addition to removing vaccine misinformation, we have been focused on reducing the virality of content discouraging vaccines that does not contain actionable information. This is often-true content, which we allow at the post level because it is important for people to be able to discuss both their personal experiences and concerns about the vaccine, but it can be framed as sensation, alarmist, or shocking.”

Demanded a reduction in “general skepticism”

Andy Slavit, a senior adviser on the White House COVID-19 response team asked about misinformation on WhatsApp, a messaging service owned by Facebook’s parent company Meta. A Facebook executive said that WhatsApp already has “forward limits and labels” that reduce the viral spread of misinformation. The executive pointed to a change made in April 2020 that reduced the spread of repeatedly forwarded messages by 70%.

Unimpressed with the changes, Flaherty told Facebook that the bigger issue was “general skepticism.” He asked how the company was measuring the effectiveness of the changes. 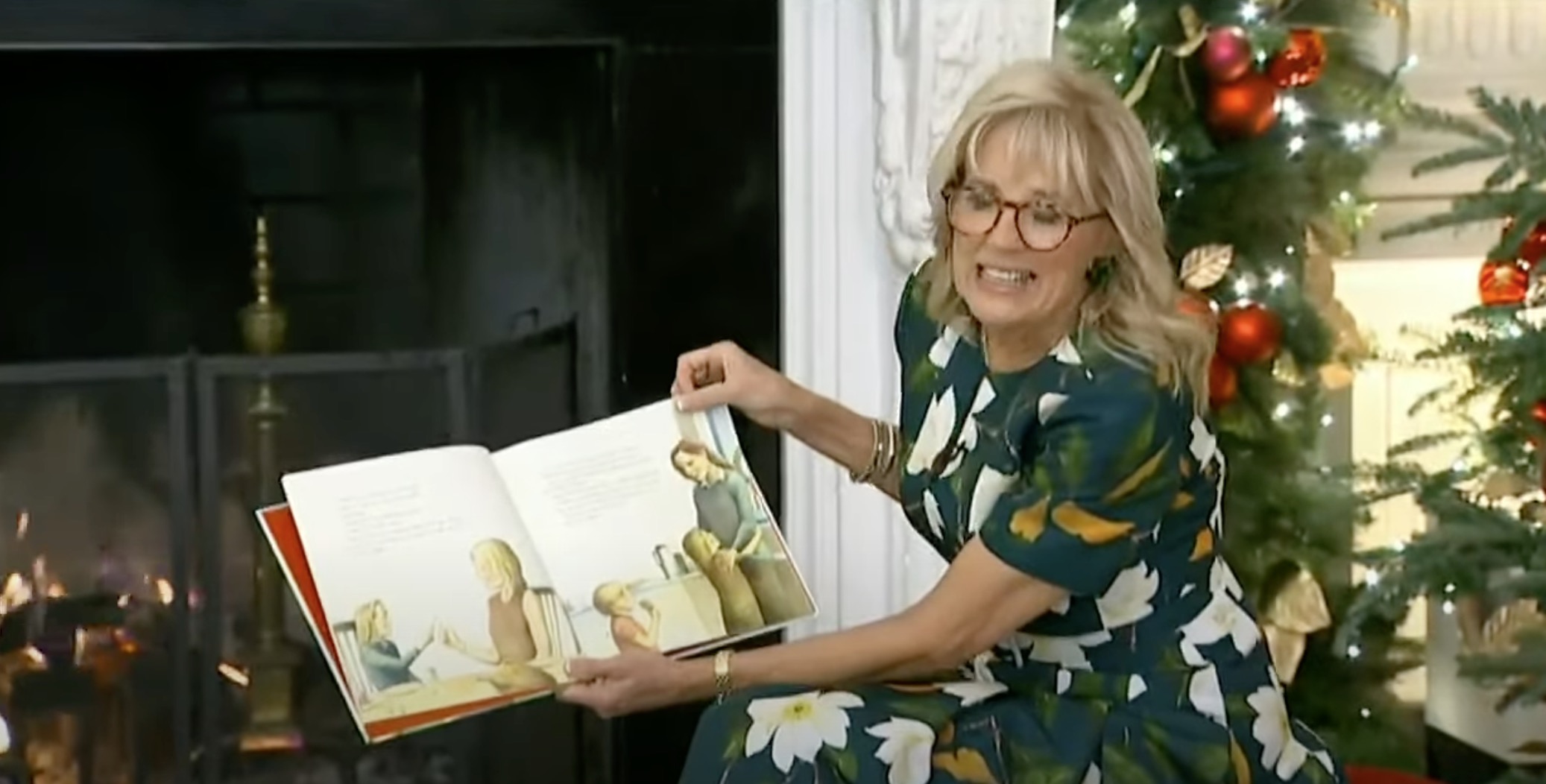 Deputy Director of Digital Strategy Christian Tom emailed Twitter about a meme video featuring the audio of a kid cursing and yelling at The First Lady, telling her her to shut up, just as she’s about to read a storybook to a young audience.

“Would you mind looking at this video and helping us with next steps to put a label or remove it?” Tom asked. 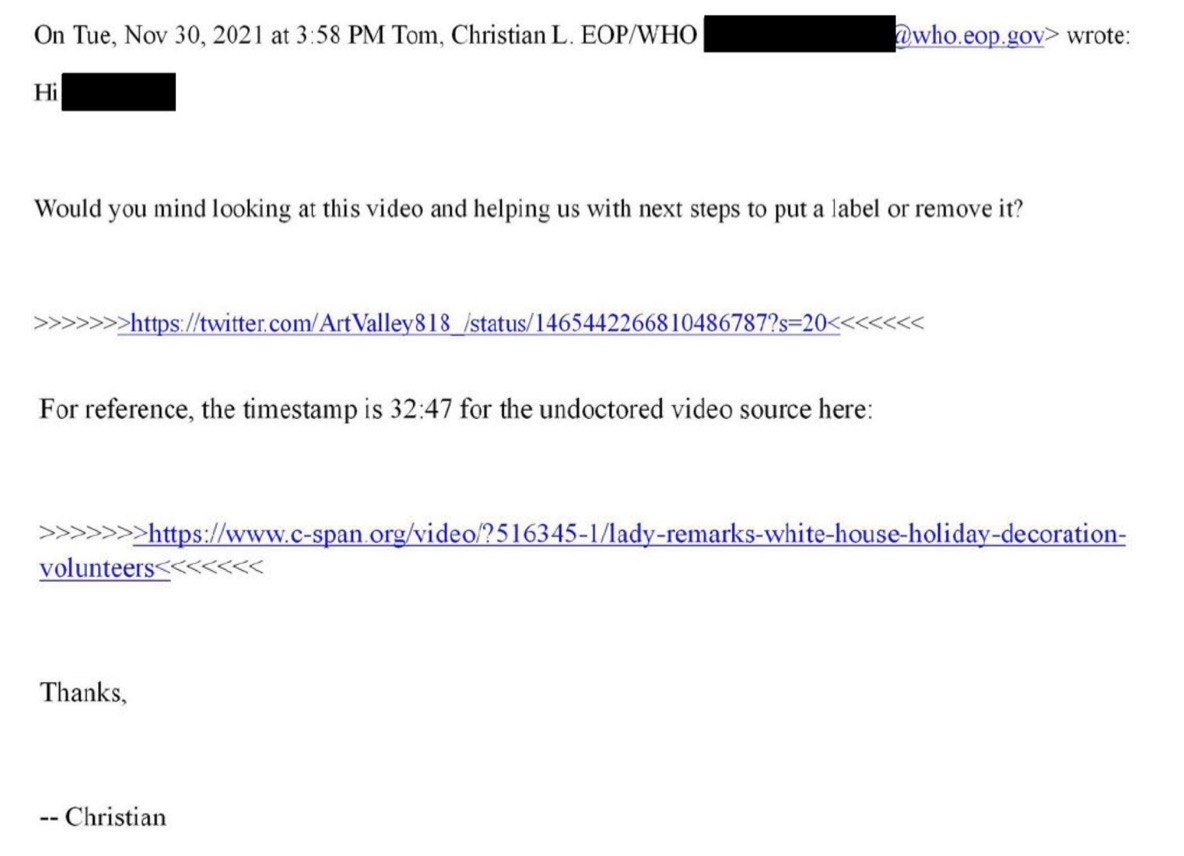 When Twitter said it would add an “event page” to provide context, Tom wanted more, asking Twitter if it will put up a “manipulated media” label.

In the Twitter thread, Tom kept attempting to justify why the video should be labeled or removed, and Twitter kept pushing back saying that although the video had been “significantly altered, the team has not found it to cause harm or impact public safety.” 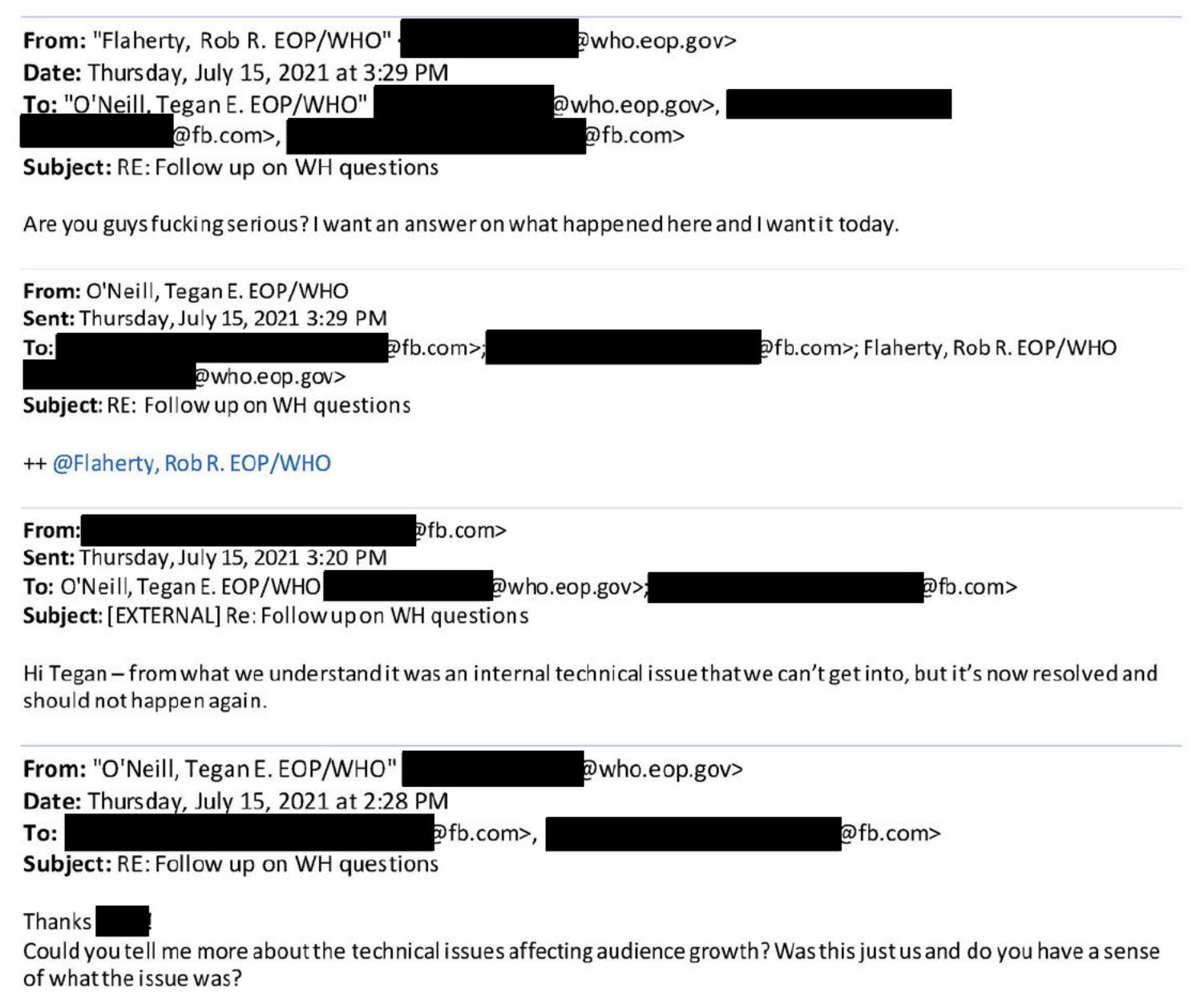 “I want an answer on what happened here and I want it today,” Flaherty demanded.

Flaherty also asked how the company could implement interventions in WhatsApp considering the messages are private and encrypted, meaning even Meta doesn’t know what people are saying in them. 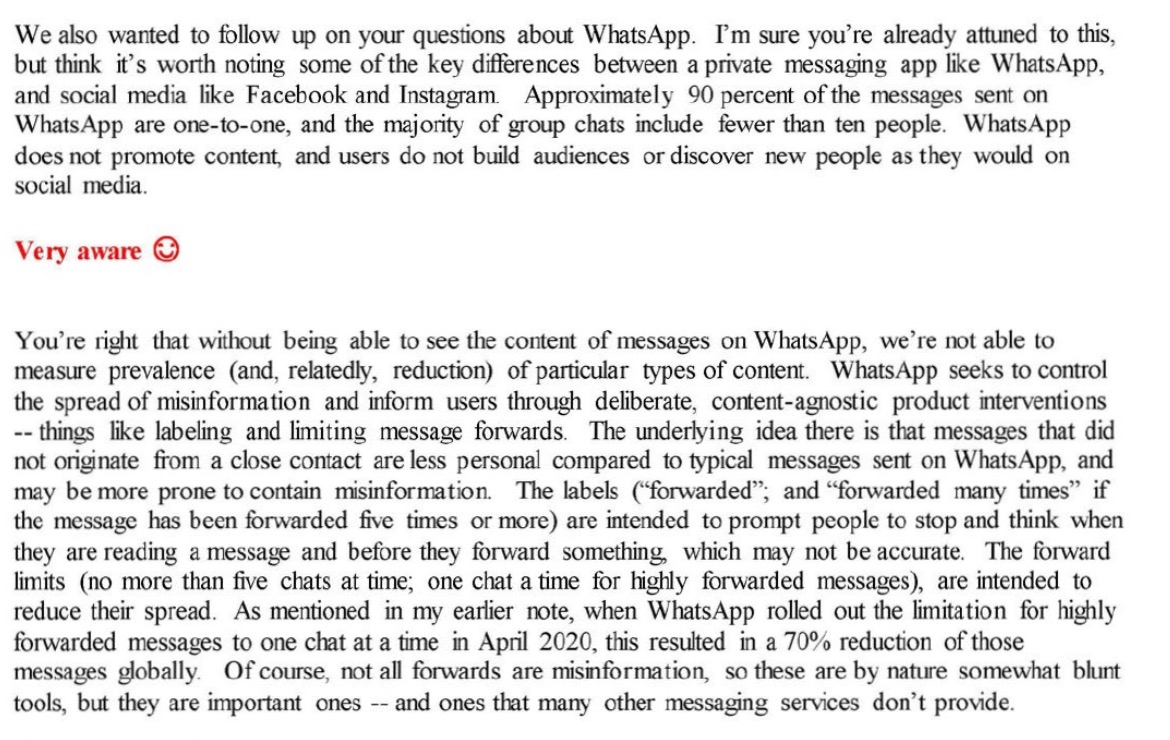 The company explained that it partners with the WHO, fact-checking groups, and governments to promote official COVID-19 narratives on the app. It said it reduces the spread of COVID-19 misinformation via “mass marketing or scam” bans.

In other communications with Facebook, Flaherty demanded to know why the tech giant was not censoring posts by conservatives like Tomi Lahren and Tucker Carlson that questioned COVID-19 vaccines and why it was “actively promoting anti-vaccine pages in [Instagram] search.” Facebook said that the Instagram accounts were removed. We explored that in more detail here. 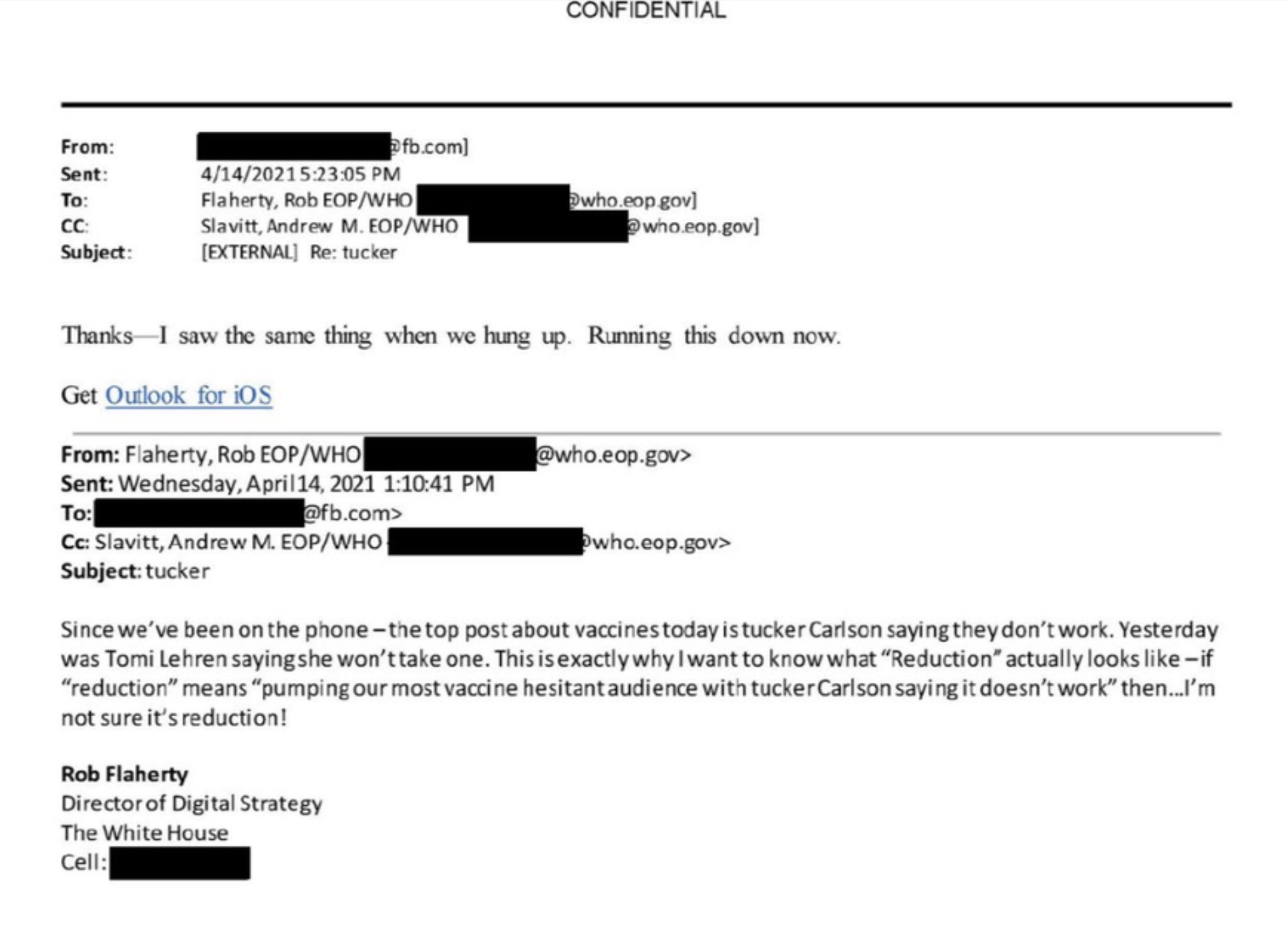 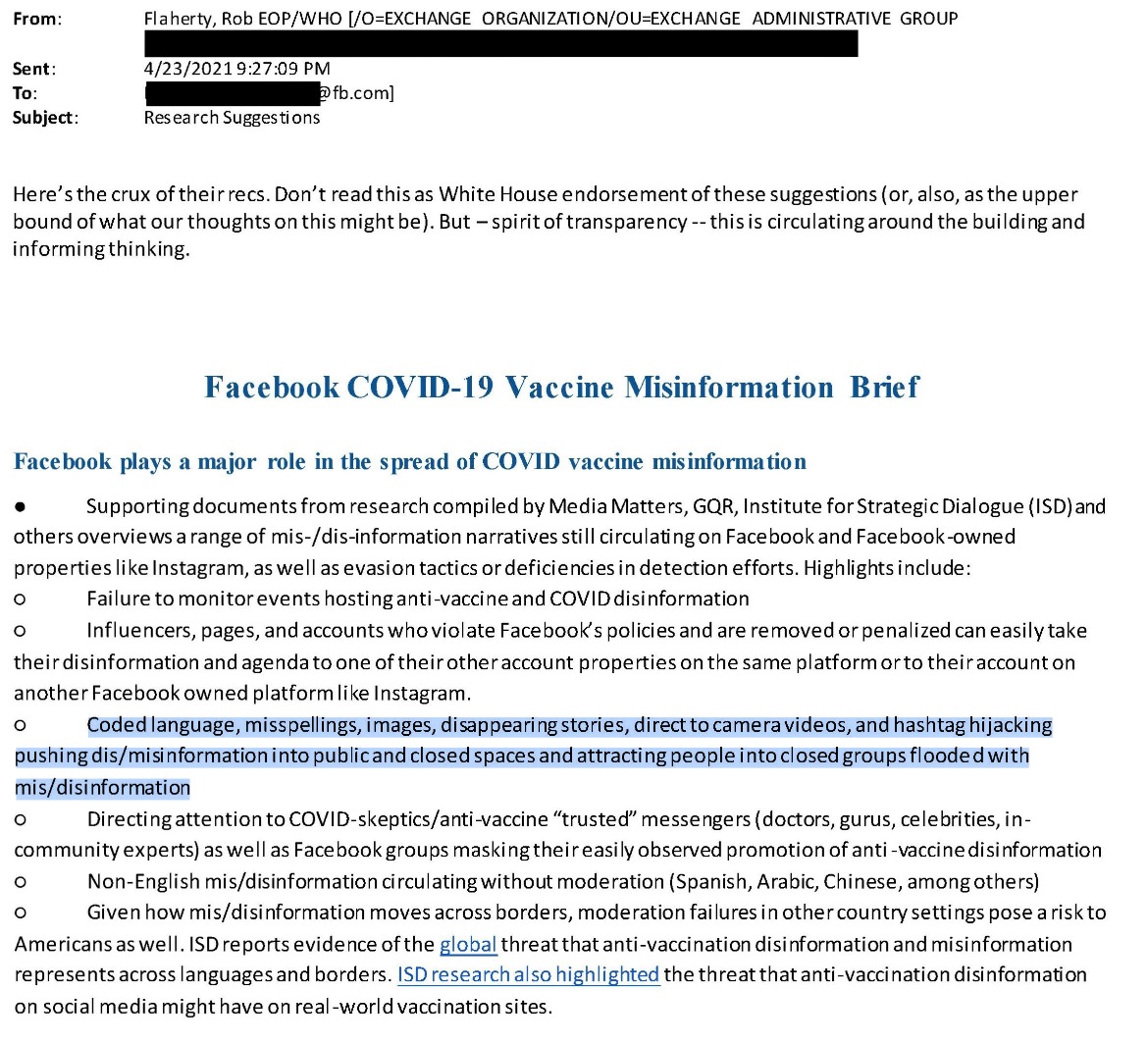 Flaherty also shared a memo that was circulating in the White House in April 2021 accusing Facebook of “failure to monitor events” on Covid disinformation, its failure to remove non-English disinformation, and failure to stay updated on “coded language” used to evade its misinformation policies. 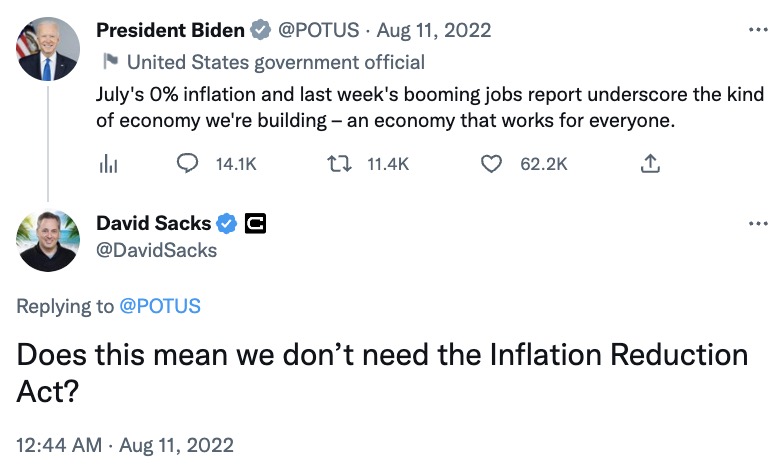 In an email to Twitter, White House Director of Digital Strategy Rob Flaherty wrote: “Happy to connect you with some economists who can explain the basics to you guys.” The National Economic Council’s senior adviser for communications Jesse Lee was added to the email thread.

“I like the feature!” Lee said after a Twitter executive explained Birdwatch. “But this note is factually inaccurate .. you are in effect calling the President a liar when his tweet is actually accurate.” 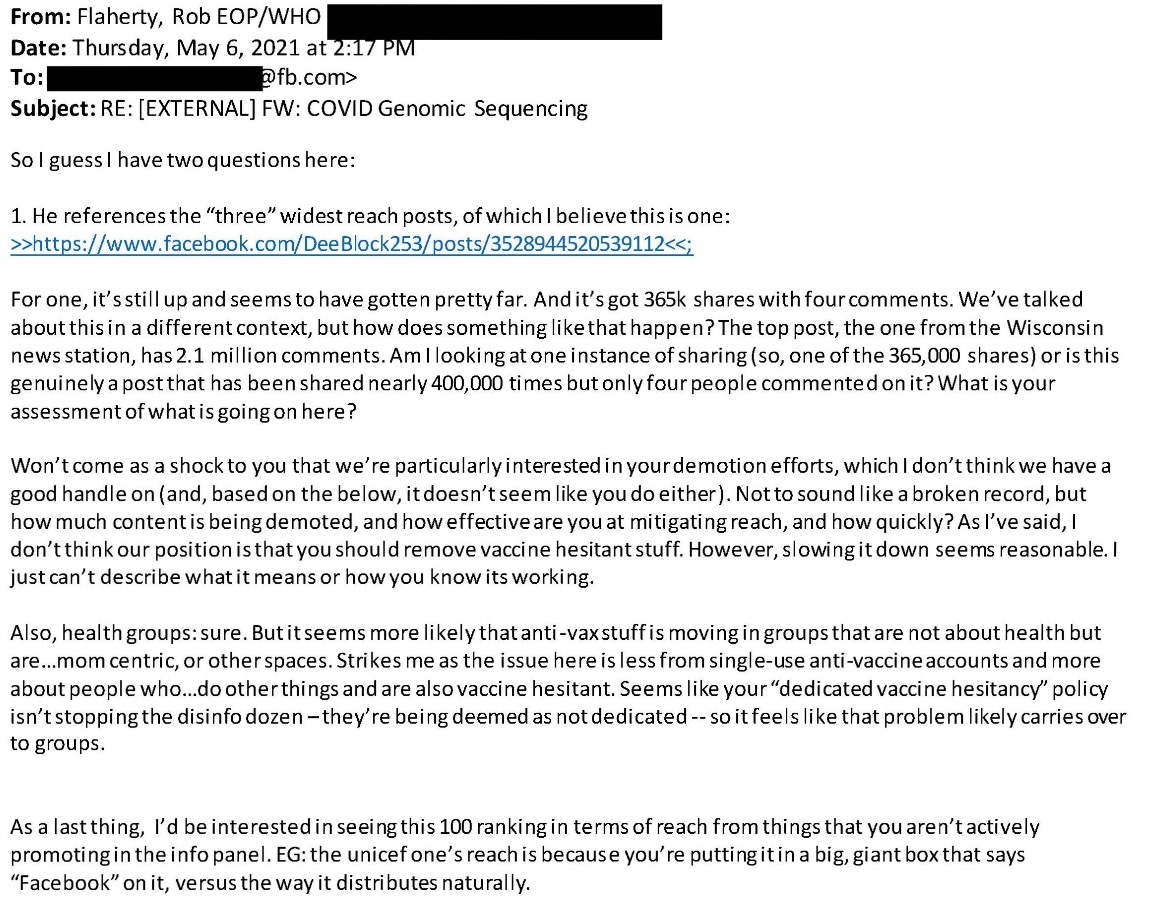 The White House said such requests are not censorship. In May 2021, Flaherty told Facebook it never requested the removal of “vaccine hesitant stuff,” but “slowing it down seems reasonable.”

The White House has insisted that it doesn’t flag posts for social media censorship, despite the previous press secretary Jen Psaki saying it does.