Twitter is complicit in censorship on behalf of Indian government

India is often described as “the world&rsquor;s largest democracy” – at least in terms of the number of citizens and the country&rsquor;s formal political system – but the reality, as with many democracies around the world, is far more complex and complicated.

To make matters worse, India is one of those countries that have long-standing territorial disputes with neighbors, associated with ethic and/or religious strife – and now in the digital age and the omnipresence of social media, all this creates a turbulent mix.

Kashmir, specifically, has been the cause of protracted trouble between India and neighboring Pakistan – a politically and security-wise unstable region that the Indian government always has the ambition of controlling more tightly.

The real-world trouble, and extreme sensitivities and tensions linked to territorial disputes, that perhaps only those with first-hand experience can fully appreciate, are unsurprisingly spilling over to the online realm – specifically, to Twitter, as the Committee to Protect Journalists (CPJ) writes.

The committee suggests that the Indian government has been involved in a systematic effort to control information and media outlets originating in Kashmir. 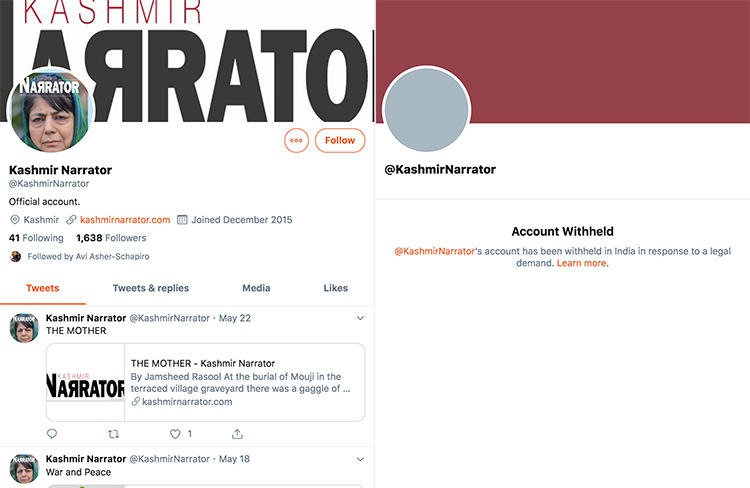 One case involved a story by a local magazine, Kashmir Narrator, that from the Indian government&rsquor;s perspective gave a platform to a terrorist – resulting in the arrest of the journalist who authored the article, and in Twitter “withholding the magazine&rsquor;s account in India, blocking local access to more than 5,000 tweets.”

As the situation on the ground deteriorated in August this year, so did that on the internet: according to CPJ, “the Indian government continued to reach beyond its borders and enlist Twitter to censor accounts sharing news and information.” 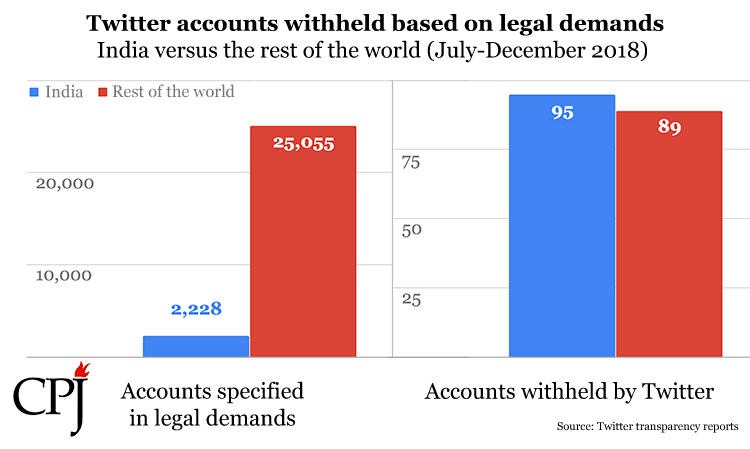 The non-profit writes that legal notices asking Twitter to censor information coming out of Kashmir resulted in hundreds of thousands of blocked tweets since 2017.

However, Twitter&rsquor;s willingness to work within the confines of the law of the land, it seems, is not absolute: while the company “does not comply with every request” – “more accounts were withheld in India in the second half of 2018 than in the rest of the world combined,” Twitter&rsquor;s own transparency reports have revealed.

According to CPJ, a “withheld” account means that users can still post to them, as they are blocked only in the territory covered by local laws. This is different from suspended accounts that break Twitter&rsquor;s own rules, rendering them unavailable worldwide.

“There is a transparent process for governments or authorized legal entities around the world to submit requests to Twitter,” a spokesperson said.

However, CPJ quoted experts who said the social media platform was “not transparent about how hard it pushes back against censorship requests.”